A dream you won't want to wake up from.

Twenty years ago, a game was released which is arguably the greatest release on the original Game Boy. Today, The Legend of Zelda: Link's Awakening DX is available to download easy and cheap off the 3DS eShop. Like a fine wine, age has only highlighted the game's brilliance.

Awakening is unique among Zelda games in that it's one of the few that does not have Link in Hyrule, and does not involve Princess Zelda or Ganon at all. Instead, Link washes up onto Koholit Island, which no one has ever left. Link sets out to find a way back home by waking the egg of the Wind Fish, which may or may not result in the island's disappearance. 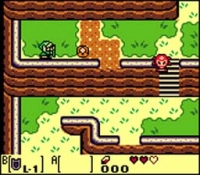 Of special note is the Island itself and its inhabitants. In the days of the original Game Boy, Nintendo's designers were able to experiment a bit more than they were on the NES and SNES and that seems to fit the dream-like atmosphere of Koholit Island very well. Numerous enemies and characters throughout the game are taken directly from the Mario series, anthropomorphic animals live together in a village, and an Old man offers hints via rotary dial telephones. This is also the title in which owl guide Kaepora Gaebora makes his debut and there's even a character who makes an appearance decades later in Skyward Sword.

The Zelda gameplay is largely the same as the NES original and SNES prequel, so anyone familiar with those entries will be able to get into Link's first portable adventure. Link's Awakening does seem to be more tightly designed than those entries however; if players pay attention to the guiding words of the owl or simply explore the unexplored sections of their map it shouldn't take long to find the next area. Maybe because this was a portable entry and the world isn't quite as big, or perhaps because they were free from the constraints of Hyrule, but the designers did an incredible job making Link's Awakening much more accessible than its predecessors and in a good way. The dungeons are also well designed, with the possible exception of the confusing Dungeon 7 i.e. Eagle's Tower.

In terms of graphics, most who care about such things won't find Link's Awakening that impressive, even in color. These visuals were astounding for a portable system back in '93, but in some ways show their age. The game is thankfully easier to play with the help of the 3DS backlight and color added via the DX edition, but those are just icing on the overall cake. 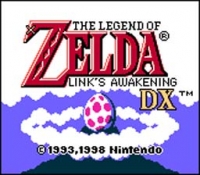 Like with the gameplay, Link's Awakening gets a surprising amount of leverage out of an 8-bit sound chip. Though you will be hearing the Zelda theme a lot, there are quite a few original melodies that sound very good, even in chiptune form. The sound effects are also well done and complement certain elements in ways that are even better than those of the SNES. The sword charging sound effect for example sounds better on Game Boy and gives a more accurate indication to the player of when it is ready.

Link's first portable adventure will likely take some time to those who aren't familiar with it from before. Even then, the game takes a few hours to complete and along with several side quests is well worth the six dollar asking price. In addition, the DX version adds a new Photo quest and a brand new dungeon with a choice of two upgraded tunics. It isn't the biggest Zelda game, but Link's Awakening still has an impressive amount of content.

Though it doesn't dazzle with flash the same way that the more modern Zelda titles do, Link's Awakening was the little Zelda that could back in 1993. There was clearly a lot of love in the project and it showed. What resulted was the current best portable Zelda game ever.