What is Wii U?

Whether it's down to Nintendo's ambiguous advertising, or the general unawareness of the public when it comes to gaming matters, the Wii U has been a source of great confusion for a lot of people out there. This quick article hopes to sort that out.

Wii U is the latest home console released by Nintendo in November 2012. The first thing you should realize is that the Wii U is not be confused with its predecessor, the Wii (released in 2006).

The Wii U is a brand new system, with new capabilities and much more sophisticated hardware. The Wii U has HD graphics. See the image below for a clear distinction between how the consoles look:

The Wii U console comes bundled with a revolutionary controller called the GamePad. This pad has its own screen and looks like a standalone handheld device, but is key in controlling the Wii U. This GamePad has a touch-screen, motion controls and numerous buttons which can be used in games and other applications.

Standard Wii Remotes can be used with the Wii U in games which support them.

As mentioned earlier, Wii U is Nintendo's first console to make the leap into high-definition graphics, resulting in much better looking games than previously possible on Wii. For a more complete list of technical details, see the Wii U specs.

Wii U is backwards compatible with the old Wii. This means that all Wii games can be played on Wii U, but Wii U games cannot be played on your old Wii console.

Wii U games generally come in blue boxes, while the old Wii ones are usually white: 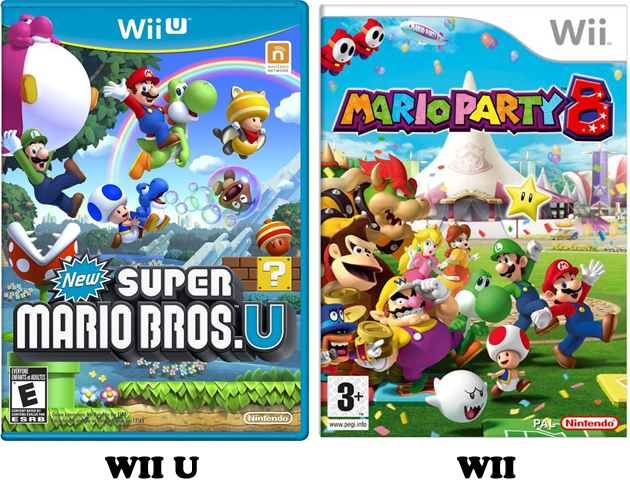 Occasionally, special games may use a different colored box - so it's best to look out for the Wii U logo instead:

We hope this has cleared up a few things for anyone who was confused about the Wii U. Please keep up to date with the latest news on our Wii's World homepage!