A small accessory that connects to the base of the Wiimote has been announced. It's called the MotionPlus and promises to bring true 1:1 motion to Wii games, as opposed to shakes and waggles. 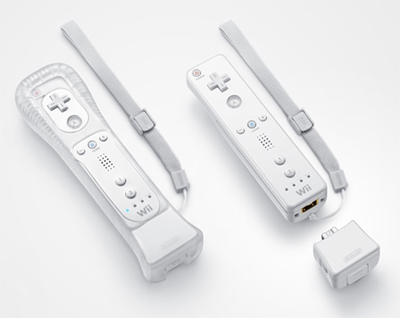 The MotionPlus combines with the remote's accelerometer and the sensor bar to offer more advanced movement detection.

"Every slight movement players make with the wrist or arm is rendered identically in real time on the screen, providing a true 1:1 response in their gameplay. The Wii MotionPlus accessory reconfirms the Nintendo commitment to making games intuitive and accessible for everyone".

More details are expected at the E3 conference tomorrow.

Kewl, how much will it cost?

Yeah! Nintendo knows what we want and is giving it to us! Props to Nintendo for caring about there consumers.

Ugh. Where does the nunchuck go then?

More accessories for the wii-mote. What's next? I hope with all my heart that it's the voice chat thing that high voltage is making. One extension I wouldn't want with the wii-mote is a spatula (cooking mama).

Wiimote already offers realtime response, I think there's more to this, maybe movement tracking and far more advanced 3d movement motion capability. Funny how e3 only just started and Nintendo has stole the show already. Microsoft's "we are like Nintendo" press event was lame and their mii copies and final fantasy news were both cases of taking from ps3 and Wii, pathetic.

This is awesome! I have been hoping for something like this for a long time so I will get accurate movements on my Wii games! I just hope you can plug the nunchuck into the back of the accessory to use it on awesome games like Zelda: Twilight Princess and Star Wars: the Force Unleashed.

It actually looks like there is a port for the nunchuck on the back of the Motionplus, it seems to covered by a cap in the picture on the right.

By the time they're done, the wiimote will look like a 10 foot pole.

What if you need to use the nunchuck? I'll wait until tomorrow's conference. Hopefully Animal Crossing Wii and Kid Icarus Wii's gameplay is shown. And hopefully Pikmin 3 will be unveiled.

And how much does it cost eh? It should come free with a game.

Are they going to have new slip covers too? It looks like it.

To those wondering about the Nunchuck, I think there is a port on the back of the MotionPlus under the rectangle on the end. I don't know for sure, just a guess.