A three year old Labrador Retriever belonging to the Becknell family of Loveland, CO caused alarm when it began coughing up blood.

On taking it to the vet, an X-ray revealed a large mass in the dog's stomach. After administering Syrup of Ipecac it began to vomit. Lo and behold out came a Wiimote. Marie Becknell commented:

"The Vet started massaging the dog's belly and it just came flying out. I knew what it was right away by the color and shape of it. It was my son's video game remote".

The dog later made a speedy recovery. 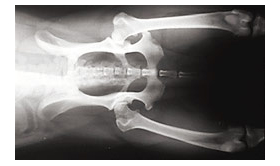 That's one crazy dog I'm sure.

Everybody loves Wii- even canines.

How did the dog fit it down its throat?

The dog made a speedy recovery. But what about that poor wiimote?!

Oh my god. Forget about letting these babies smash your stuff. Now we're all going to be warned not to let our animals swallow the Wiimotes! I wonder what kind of picture they'd use for that?

Sorry Pup, Wiimotes are not a doggy bone.

OMG that is WICKED.

Whole? Not in bits? Do dogs even bother to chew anymore? I've seen my dog puke out pairs of my sisters' panties.

Does it still work?

That was weird! I mean a Wiimote inside a dog? How did that thing get inside the dog?

OKAY! Two things crossed my mind as to how that wiimote got in the dog. 1) The dog for some reason took the wiimote off the living room floor and found it rather tasty. Next time wipe off the BBQ sauce before you play WiiSports. 2) This is just disturbing, but the dog owner probably deliberately inserted the wiimote into the dog's other end for his own sick and twisted jollies and then accidentally lost it. Unless it's a big dog, the alimentary canal is too convoluted to have something like a wiimote go through it. Poor doggie.

There's dozens of "video game remotes", so get it right if you're going to buy it for your son. It's a Wii remote.

Too bad for him that's another kind of Wii injury.

When I have a late night gaming session I always awake worrying my jack russel terrier is chewing my wiimote or nunchuck and go down to check. This is a regular thing, why I don't just put it away, maybe it's the state I'm in. Great story, lucky dog. My old jack russel was fed glass by a mad old lady next door - my dog wasn't so lucky.

Wow. I'm not surprised, My dog (A lab) swallowed and chewed many, many things, including a couch, a doll, a mobile and the side of the house. The poor, poor Wiimote. Rip.

Wow looks like dogs want to play the Wii too.

Wow! Poor dog probably thought it was a bone. They're both the the same sort of shape.

Stupid person should look after the wiimote.

Do you think that if you picked up the dog and started waving it, the sensor bar would pick up its signals?

That's not right. How did it even go in there. I see the Wiimote in the X-ray.

I've got a labrador so I know that they eat anything and everything and it would be no trouble to swallow it whole. I don't think my lab even knows she has teeth.

Heh! It would be fun to play Wii sports with the Wiimote still inside the dog! Want to play tennis, Max?

Wow that's a little disturbing to be honest.

If my dog had a big enough mouth, he'd love to eat all my wiimotes. He did chew up my Nintendogs DS cartridge once. Don't cry, it still works.

My dog choked on my nunchuk but the wire was still out of his mouth, so we pulled it and the nunchuk came out.