In this RPG from Ubisoft, players take on the role of young Princess Aurora, who is on a quest to retrieve three sources of light from the evil queen. She must fight monsters and solve puzzles to progress. She is assisted by her firefly companion Igniculous, who can heal party members during battles and write messages in light to interact with other players.

Child of Light has no review on Wii's World. Write a review 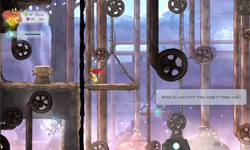