Hex Heroes is a multiplayer real time strategy game for Wii U where up to 4 players share the TV harvesting resources, building structures, fending off enemies, and exploring dangerous territories. Another player uses the GamePad to manage resources and teammates, make executive decisions, and survey the land from a bird's eye view. Hex Heroes can be played solo, but we?re sure you'll want to wrangle up some friends to join in!

Hex Heroes has no review on Wii's World. Write a review 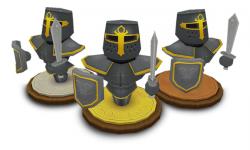