He has a glandular problem, he swears

Recently I got my hands on a copy of Chubbins for download on the Wii U, seeing as my only other options for review codes at the time were limited to the likes of Evofish and I am an Air Traffic Controller Airport Hero Hawaii, and I didn't feel like being driven to suicide at the time. Regardless, my expectations were pretty low entering the game seeing as how the titular hero has a blank, possessed stare and a generic-looking design. However, I ended up playing a pretty solid and hard-as-hell platformer with some inventive mechanics, whose quirky faults ended up making me laugh rather than making me angry.

Chubbins' main draw as a platformer on a console already dominated by triple-A titles of the genre is the way our cholesterol-filled protagonist moves and controls. This bunny never stops jumping; the platforms he lands on cause him to jump again to a height decided by the speed and direction of the block's animation. A block with fast-moving arrows pointing up will sends Chubbins soaring, while a block with slow moving arrows pointing down will cause him to rocket back down like a fuzzy comet. Some of these blocks break and disappear for a time after Chubbins' bunny butt smashes them to bits, and seeing as there's no main floor for our long-eared friend to meet with, careful control and quick thinking is required to make sure Chubs McGee doesn't get sent back to the depths of Tartarus from which he came. 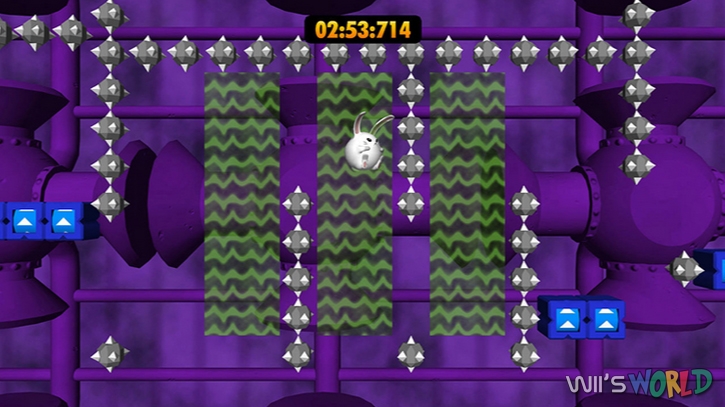 The enemies are relatively cliched but with some surprisingly-funny twists. For example, one of the first foes Chubbins must navigate around is a badger' WITH A FEDORA. Not doing it for you? How about a fat brown bird with a fez? No? How about a pimpin' eagle with gold & jeweled rings around his talons (his 'Lucky rings' as the game calls them). The designs aren't wholly creative, but the presentation and small additions made me giggle; it's funny in the same way as Superman being able to disguise himself perfectly with a suit and glasses, in that it's a slap in the face of logic and originality that is made all the more stinging by how effectively the method works.

Speaking of design aspects, the levels themselves are crafted exceptionally well. Some even allow you to take different paths to reach the end, and require a bit of strategizing on the player's part. Even if the graphics themselves are reminiscent of the GameCube, the aesthetics of the game are cutesy and coherent enough to draw attention away from the outdated visuals.

Chubbins, as stated earlier, is not a perfect game, and has its own series of obvious faults, the most hilarious and confusing of which are the subtitles selected for the levels. One was called 'Roots in the Community', and another 'This is not a pry bar'. Level 2-2 was called, quote, 'TWENTY-TWO!!!'. This was one of the more decipherable examples the game had to offer. The names either make no sense at all or are so blatantly obvious that a five year-old could have written them; kind of like the plot of a Dan Brown novel. 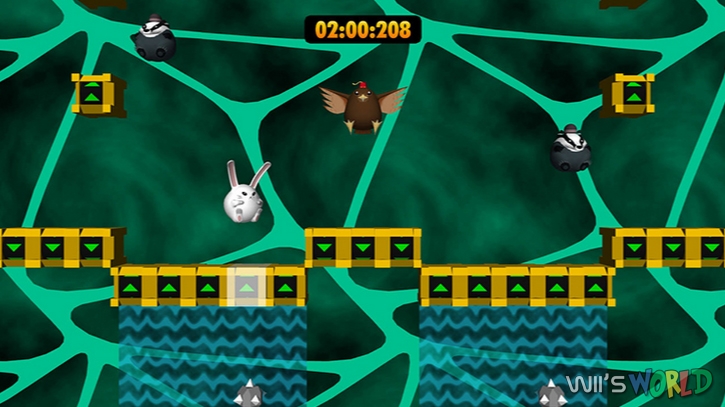 Speaking of Dan Brown novels, this game would be short if a lot of the content wasn't there specifically to lengthen the game. The levels are well-designed and the checkpoint placement is some of the best I've ever seen in a platformer, but like NES titles of old, almost every level has segments designed specifically to waste your time. This includes enemies which require you to hop between various platforms just to get in position to bounce over or under them, hiding the finish line in a non-linear level behind multiple walls of spiky orbs only passable by collecting vegetables scattered as far from each other as possible, and creating situations where the player must die in order to figure out how to complete the challenge. Unlike most of Super Meat Boy, Chubbins' difficulty is determined by the developers rather than the skill level of the player.

My biggest gripes with Chubbins are due to its insipid and ear-shredding sound design. Upon starting up the game, the player is greeted with a still model of our short-lived bunny friend, a world selection screen, and no sound. Oh, silly player, you had the volume off, you missed out on the dollar store midi keyboard on a panflute setting playing the kind of simplistic, trite music you'd hear on a kids cartoon only airing at 2 AM on Disney Channel. Thankfully, some of the worlds are graced with some variation, but it still isn't much better than the pitiful opening ceremony. The only other dominant sounds in the game are the bouncing noises, metallic shine/sparkle effects, and the disturbing infant-cries of a dying Pudge Bunny. If I could offer any one piece of the advice to the developers, it would be to spend more than 50 dollars and a hot dog on your sound design, because this game, while not perfect, deserves better than what your 5th grade daughter's music class can provide.

And really, this goes for the entire game. I enjoyed it, I truly did, but I feel like with a bit more effort, money, creativity, and hopefully someone who can speak basic English, Chubbins could've been an indie hit. The unique controls and difficulty set it apart, but generic character design, dated graphical capability, and painful in-game audio, I can only recommend Chubbins to a small niche of people. If you have five dollars and a hankering for a unique, challenging platforming experience, and can look past the flaws of this game, I think you'll find this bloated rabbit a fun little break from the ordinary.