Published by Nnooo, Developed by 3 Sprockets

I have always had a passing interest in strategy games. No matter what flavor they come in, I get that itch to play one once every couple of years. From Civilization to Warcraft, I've played my fair share of PC and console strategy games. Enter Cubemen 2, the sequel to 3 Sprockets' 2012 title, a hybrid strategy and tower defense game for the Wii U eShop. Cubemen 2 looks like a promising title, but is it good enough to carry the strategy genre's banner for the Wii U?

As mentioned before, Cubemen 2's core gameplay combines elements from both strategy and tower defense games. This combination serves the game well and helps to offer up addictive and rewarding gameplay. The basics of Cubemen has you creating units in order to meet an objective based on one of seven game types. The game features ten different unit types, each with unique stats and abilities. Units are spawned using in-game currency called Cubes. These can also be used to upgrade units. Each upgrade will increase your damage and range while decreasing your wait time between attacks. Increasing your level also recovers your health. This upgrade system gives players a nice risk versus reward system, forcing them to choose between healing and having stronger units. 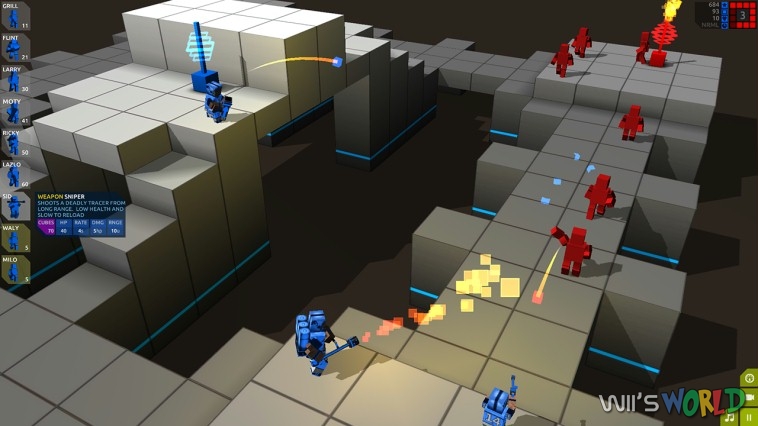 Cubemen 2 features seven different game types split between single and multiplayer modes. Defense and Rescue, are only available in single player. The other five, Skirmish, Capture the Flag, Territory, King of the Hill, and Defector can be played in either single or multiplayer. Defector is the most unique game mode and my favorite of the bunch. You start with one of each type of unit. As you defeat enemy units, they will 'defect' to your side. This gives them a full health bar and allows you to recoup lost troops. Defector is the most difficult of the game modes, requiring strategy to excel at, thus making it the most rewarding. Each of these modes also have options to change settings like difficulty, numbers of waves, time limit, etc. These extra choices allow you to further customize each mode to your liking. With all these modes and added options, Cubemen 2 offers up plenty of variety for players.

Cubemen 2 also features two campaigns, each with fifteen levels. These are broken down into a beginner and advanced campaign. These campaigns feature a nice progressive difficulty, but unfortunately only use one game mode. Finishing some of the later levels feels like a real accomplishment, but they are never difficult to the point of frustration. In addition to the two campaigns, Cubemen 2 comes with twenty maps for use in either single player or online multiplayer matches. The game's developer, 3 Sprockets, also included a map editor. Thanks to this, and the ability to upload created maps, Cubemen 2 offers an almost unlimited amount of content for those who truly enjoy the game. At the time of this review, the Cubemen 2 website shows 943 maps have been uploaded for the Wii U version of the game. Offering plenty of content for Cubemen players, both old and new alike.

The weakest aspect of this Wii U port at this time is the online multiplayer. While the actual online portion of this game works fantastically. The real drawback is the lack of users to play against. I attempted to find an online game several times over the week I spent playing the game for this review. There was only once that I was able to find a game during this period. The online session I was able to play had no lag or noticeable connection issues, even with my opponent being from another country. Cubemen 2 features a fantastic netcode that makes the game a joy to play online. This makes it that much more unfortunate that the online portion of the game isn't seeing much activity. It is my hope that the game receives more attention in the future that it will revitalize the online community. Even with no one playing online, the potential amount of content Cubemen 2 offers makes it a very attractive title for strategy fans on the Wii U. With all of the uploaded user maps and the map editor, any fan of the game should be able to keep themselves busy with this title for the foreseeable future. 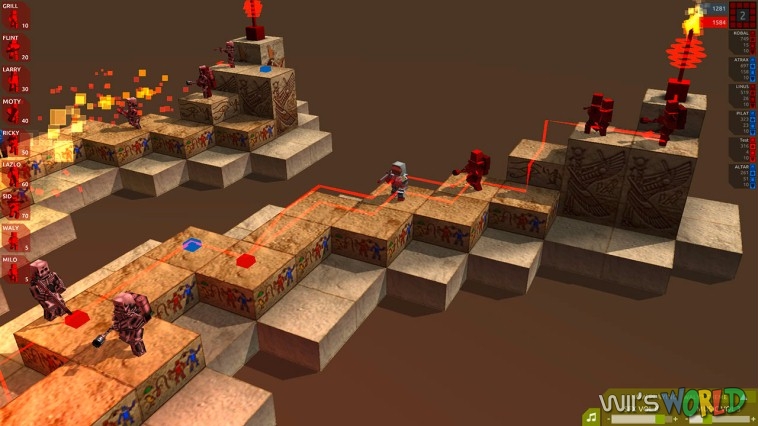 Cubemen 2 is controlled almost entirely with the touch screen. The stylus is used to move your units to different points on the map and navigate the game's menus. The other inputs on the GamePad that are used are the R and L buttons and the analog sticks. The shoulder buttons are used to quickly move through your units, while the analogue sticks control the camera. The controls are very simple to pick up and learn. One thing that bothered me with the touch controls was that during some of the more hectic moments, it's easy to click on the wrong unit or tile, which can cost you the battle in the wrong situation. However, I still feel that the game controls well. I enjoy its use of the touch screen and feel that Cubemen 2 makes great use of the Wii U's GamePad.

Cubemen 2 features fantastic graphics using a minimalist style similar to those popularized by Minecraft. Thanks to a multitude of customization options, the visuals can be altered to your liking. Would you like Minecraft inspired maps with all your soldiers as luchadors? How about snowy fields with knights? All this and much more is possible thanks to Cubemen's selection of skins. The graphics are helped by a nice coat of HD polish that really helps the visuals shine on a television screen. The game still looks great, even on the GamePad's lower resolution screen, with no noticeable drop in visual fidelity. Cubemen 2 offers a great visual package and is certainly one of the better looking indie titles, especially of those not using 2D sprites.

The audio package, much like the video, is also very well done. The game features a selection of themes for each of the main units and the game's main theme. A couple of the songs may sound similar, but they are each their own unique piece of music that fit the game well. The sound effects are good as well, if not a little sparse. Each unit has a sound effect for firing its weapon, along with sounds for objects like teleporters. The music here isn't something that I would listen to outside of the game, but the overall package is great for this style of play.

Cubemen 2 is great value for the price. The game features great feel and wonderful minimalist graphics. The addictive gameplay will keep you coming back for more and Cubemen's level editor will assure you have plenty of content to keep you busy. Cubemen 2 is a fantastic strategy game and is well worth your time and attention. The Wii U's eShop has some great offerings and Cubemen 2 is certainly among them.