Published by Capcom, Developed by WayForward

Did this Tale of Daring-Do need to be told again?

Most people who play video games are aware of an unfortunate fact. Like a lot of other merchandise, most games that are based on a license tend to... well, suck. So it came as a pleasant surprise in the days of the NES to find quite a few good games based on Disney properties, many developed by Capcom. Of these titles, DuckTales is likely the most famous, and is well regarded by nearly everyone who has played it nearly 25 years after its release. Developer WayForward then decided to remake this beloved classic, but did DuckTales really need to be remade in the first place?

As is typical for a DuckTales cartoon plot, the game features Scrooge McDuck adventuring to find lost treasure. While the original game offered no real explanation for a connection between these treasures, nor the villains that the world's richest duck encountered along the way, it didn't really need to. While plot took a backseat to gameplay, all of the recognized characters from the show were put into appropriate roles. DuckTales: Remastered attempts to tie these disparate elements together, but actually ends up raising more questions with this expanded story. It's nice that this makes the remake more like an actual DuckTales episode, but the story tends to drag at times and was largely unnecessary. 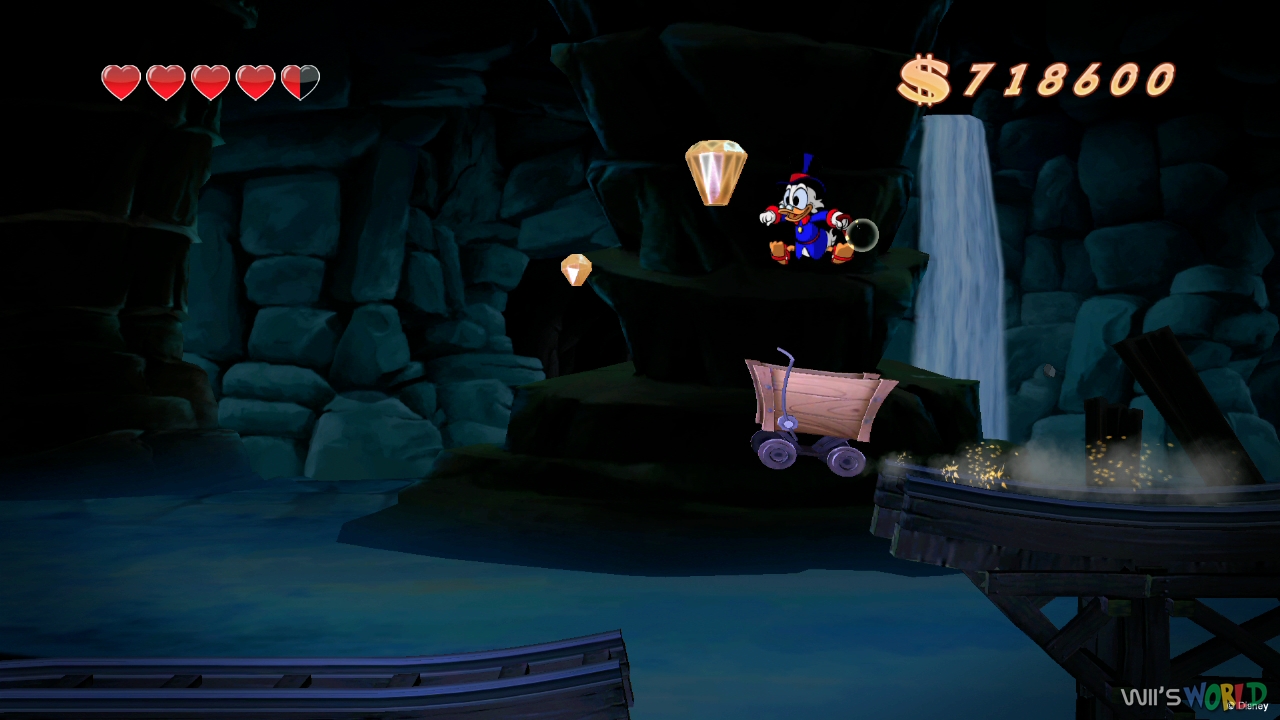 In terms of gameplay, the game is almost exactly as players might remember it on the NES. Scrooge can jump, run and climb, but spends most of his time using his cane as a combination pogo stick and club. The controls are smooth as butter and may in fact handle better than they did back in the 8-bit era.

The game's levels are almost exactly the same as well. Almost. In an effort to expand the game and connect to the new narrative elements, players are forced on fetch quests in every one of the game's levels. For some levels this isn't an issue i.e. on The Moon, players had to find an item in the original game anyway. Other times however it becomes repetitive and annoying, feeling like needless padding. As a result, the game's overall feel has changed to be less about skill and more about exploration. This would be fine if DuckTales was originally a Metroid-style game, but it wasn't then and it isn't meant to be now. In addition, many of the game's areas feel more disjointed than they did in the NES title and as a result give the feeling that the levels are smaller than they actually are. The game's bosses have also been tweaked, though with more success. Each boss has new attacks, animations and generally last longer, but aren't that far removed from their NES counterparts... with the exception of the much improved final boss.

Graphically, DuckTales: Remastered is a mixed bag. The visuals themselves are wonderful. The 3D backdrops used in each area look amazing and fit the levels very well. The characters on the other hand are incredibly well animated and illustrated, in some cases looking better than they did on television. However, players will likely raise the question as to why developer WayForward didn't stick with one visual style instead of two very different ones. Though it personally did not bother this reviewer, many have not appreciated this clash of opposites. 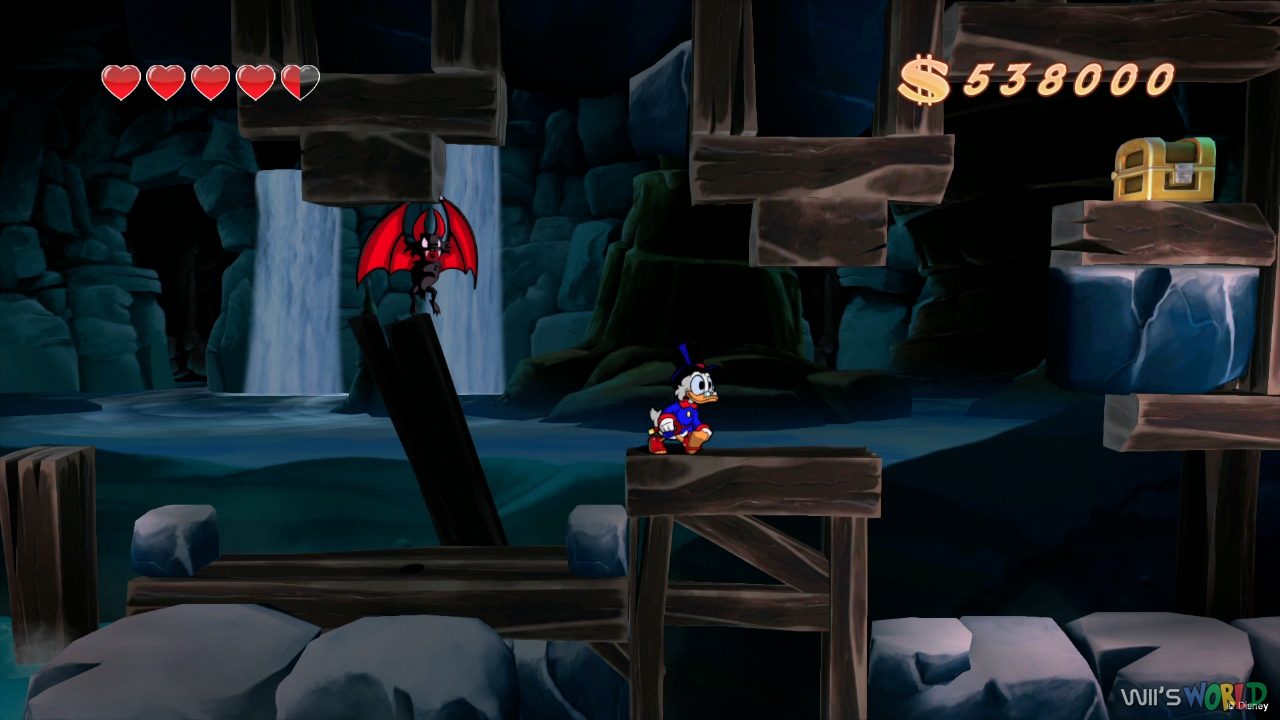 The sound in all areas is wonderful. The sound effects are well done, and are good substitutes to the NES originals. The music is a group of incredible remixes of the very catchy tunes that made up each level, and the developers cleverly used the 8-bit theme song rendition for the game's title. The voice acting is also great, as it brings together nearly the entire DuckTales cast for the first time in decades. Alan Young is slightly aged, but he still does a great Scrooge. Russi Taylor once again brings life to Huey, Dewey, Louie and Webby. Frank Welker provides a cavalcade of characters, from every one of the Beagle Boys, to Bubba Duck to Scrooge's wisecracking butler Duckworth. Even June Foray returns as the deliciously evil Magica DeSpell. The standout though is Terence McGovern returning to that hero of daring-do, Launchpad McQuack. It should be noted that two characters in particular, Mrs. Beakley and Fenton Crackshell (a.k.a. GIZMODUCK!) have new actors as their previous ones have passed away. While Wendee Lee does a surprisingly good job as Mrs. Beakley, Eric Bauza is pretty terrible as Fenton Crackshell... despite being better as Gizmoduck!

DuckTales: Remastered won't last very long if players previously tried it on the NES, and will likely only take about three to four hours to finish. WayForward tried to add more longevity through the previously mentioned fetch quests, but also two new levels, Scrooge's Money Bin and Mt. Vesuvius, but neither is long enough to be considered equal to the originals. Players can also purchase concept art with money accumulated during play, try for a high score on the leaderboards and try the new difficulty settings, but there truthfully isn't a lot of extra content and at fifteen dollars, this remake feels overpriced.

Overall there isn't much actually wrong with DuckTales: Remastered, it just feels like a bloated re-release that didn't need to happen. If players still have an NES or have another method to play the original title, the Junior Woodchuck Guidebook recommends it first and foremost. If players find it on sale though, DuckTales: Remastered at least has enough of the original's spirit to justify a play.