At least it has good music...

Frederic: Resurrection of Music, is an... interesting game. The plot surrounds your main character, Frederic Chopin, as he comes back to life in modern times. Without spoiling the ridiculous plot, you travel across the world, battling it out with countless over-the-top opponents, using nothing more than five keys on a piano.

The first thing that caught my attention in the game was its art style. While the art, in itself, was not a bad style, the characters were all drawn in over-stereotypical caricatures; I honestly thought that every character, Frederic included, were distastefully drawn. But don't let the art styles get in the way; there is still the voice acting, right? 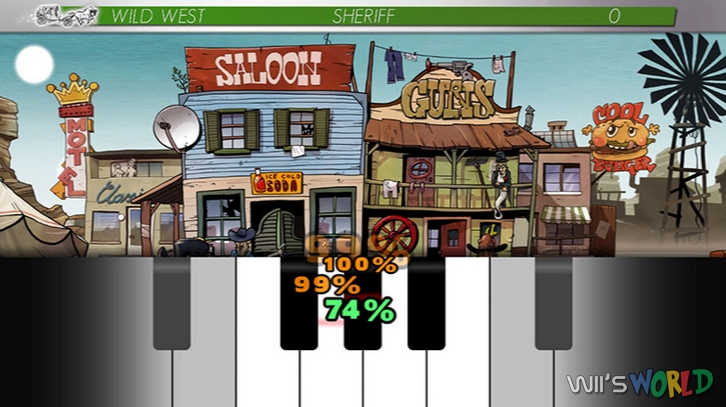 After the second cut-scene of the storyline, I was convinced that everyone involved in this game, voice actors included, were out to make fun of the characters portrayed in each level. The acting is awfully over the top, much like the overexcited commentator who announces the battles each round.

Let's get into the gameplay, though. The concept of play is simple: you have a keyboard on the GamePad, and as the notes come down the screen, you tap to the rhythm, in classic Guitar Hero fashion. As you battle it out, you and your opponent are struggling to fill up a single meter on the screen by pushing the meter in your favor (again reminiscent of Guitar Hero). While this gameplay is smooth, there are a few things that, to me, ruined the experience. 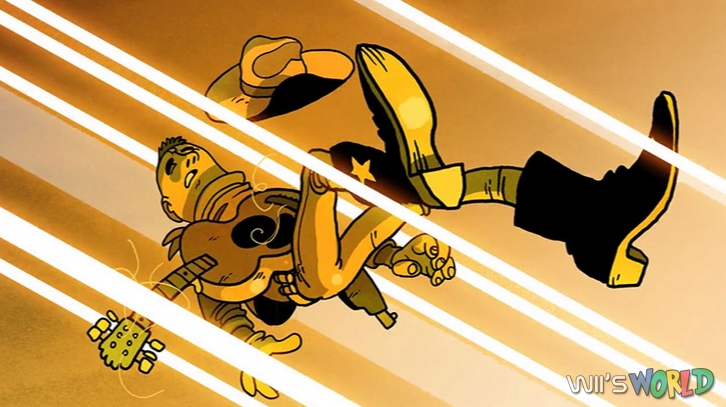 The first issue I had with the gameplay was the "superpower" that you could unleash on your opponent for a score boost by tilting the GamePad into the air (sounds like a guitar game I've played before). There is no guide or indication as to when you will achieve the ability to do this, except an on-screen prompt that lasts three seconds, and usually shows up while you are in the middle of a long run of notes. When you execute the ability, an action cinematic takes place on the TV, but you will likely miss it entirely, and the song continues on the GamePad.

As much as the game resembled Guitar Hero, I was eager to experience the higher difficulties (I played the first play-through on "Normal" difficulty). When I loaded up the highest difficulty, I expected them to add, at the very least, some chords, requiring me to hit multiple notes at once. Nope. The only difference between the difficulties is how many points you score per note, and how badly you are affected by missing a note. In the highest difficulty, missing more than a few notes will result in a failure of the song. The moral? Perfect the song on Easy, and then play it the same way on the higher difficulties.

Frederic: Resurrection of Music also has a major bug, in that one of the levels actually plays a track, while giving you the notes of another track. While the stage is still playable, you will spend the last minute of the song just watching the screen, as the notes they provide are from a much shorter song. When we contacted Forever, the developers, they assured us that they had since released a patch, but it was still pending approval by Nintendo, but as of yet the patch is nowhere to be found.

All in all, I feel that this game was a bit of a flop. The music within the game is fantastic; I wouldn't mind owning the soundtrack, just to have the cool combinations of Chopin's music mixed with familiar tunes from around the globe. That said, I probably won't pick up this game again, except maybe to show my friends just how over the top it is. If you are looking for a game that will make you want to laugh at it, this is the one. If you are looking for a piano version of Guitar Hero, I would recommend looking anywhere else.