Sick, but in a good way

Internal Invasion is a physics-based platformer done right... for the most part. You play as a small bot named Ro'bert who has been injected into the body of a sick patient. Your goal is, of course, to heal him. How is this done? By flinging Ro'bert through various sections inside the body via cannons and reaching the end of each level, all while picking up pills, getting shot by lasers, running away from giant eyeballs, and encountering magnets that either attract you or push you away from them.

Seriously, what this guy is infected with is anybody's guess. 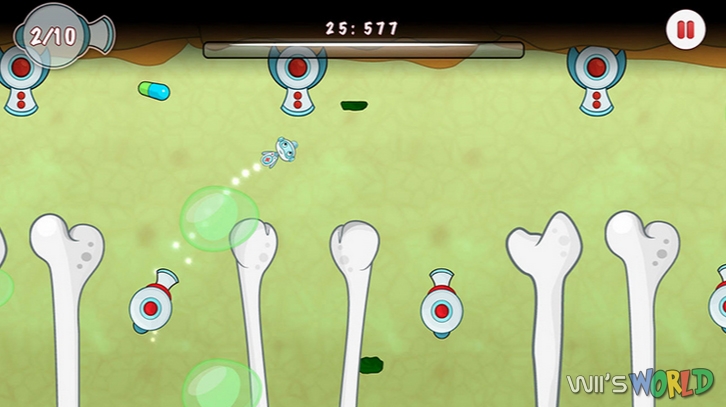 The game has a total of 50 different levels. Every so often some new game mechanics are introduced, including air bubbles and cannons that follow beneath you every time you launch from them. Thanks to this, Internal Invasion does a nice job at keeping from getting stale too quickly and keeping the player curious as to what might show up next.

How you approach each level will usually determine how difficult of a time you'll have. If you're more focused on simply getting to the end, then you won't have too much trouble progressing through the game. However, if you want to use as little cannons as possible and get to the end as fast as you can, you'll probably have a bit of a harder time. Still, having different ways for players to traverse levels is a great design choice.

Because this is a physics-based platformer, the gameplay functioning well obviously relies heavily on the physics. Thankfully, Internal Invasion's physics don't hinder the overall experience too much. However, the game could use a bit more polish in this area, as occasionally the physics can feel a bit inconsistent and cause some player frustration. 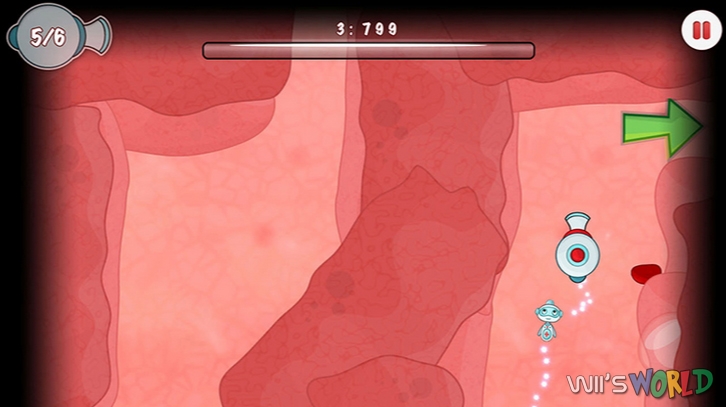 You control the game entirely with the touch screen on the GamePad. You use your stylus/finger to aim cannons and stretch them out to determine how far they will shoot you. You can also pan about the levels in order to see further cannons and obstacles and determine the best path to take. They do generally work well, but the controls can feel a tad too sensitive at times.

I've already praised the decision of having more than one way to go about a level, but what about the level design itself? While earlier levels will feel more confined and less packed, the later levels feel much more open and have much more things inside of them. Some levels even have multiple paths for you to choose from when heading towards the goal. The stages can have moments that feel entirely up to chance though, especially ones involving lasers. Still, the core design of Internal Invasion stays intact throughout. You'll always be flinging through cannons, collecting pills so that you can control Ro'bert while he's in the air for a short period of time, and be tasked with getting to the end of the level. But because the game does a good job of adding in some variety, things will stay fresh longer.

Speaking of variety, some levels even have you running away from a giant eyeball creature throughout the whole stage. Naturally, the game won't feel as relaxed in these segments, and players have to manage their time and accuracy wisely if they don't want to be destroyed. These levels are great at keeping players on their toes, and are a nice change of pace. 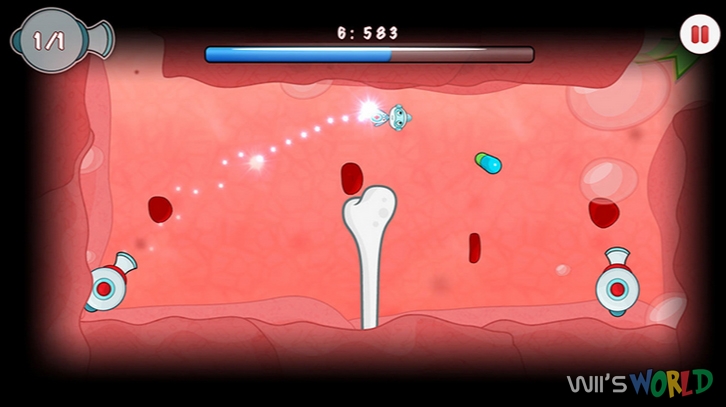 As far as presentation goes, Internal Invasion isn't half bad. The graphics aren't anything special, and the levels all look the same aesthetically, but they get the job done. The frame rate can have a few hiccups at times, although this issue might be fixed with an update in the future, along with button controls for panning out the levels.

The soundtrack used is wonderful. It's incredibly relaxing and catchy, doing nothing but favors for the game's overall atmosphere. If I ever found myself frustrated while playing, listening to the music would really help make me feel more relaxed and calm. I really have nothing but positive things to say in regards to the music.

The final verdict? Internal Invasion is a fun and interesting game that I would highly recommend to anybody, despite a few rough spots here and there.