Published by Nintendo, Developed by Ambrella

I bought this game with hesitation. I know that its predecessor on the Wii was a fun little game, but this one just looked like a cash grab to me. Truthfully, it is, but it's also fun if you're willing to try out the near-field communication functionality.

If you're wondering what NFC is, it's the ability to scan in figurines bought from Gamestop (or for you Europeans, GAME) directly into the game. The figurines cost four dollars a piece, and you can't tell which character is inside as the casing is an opaque red and white pokeball. 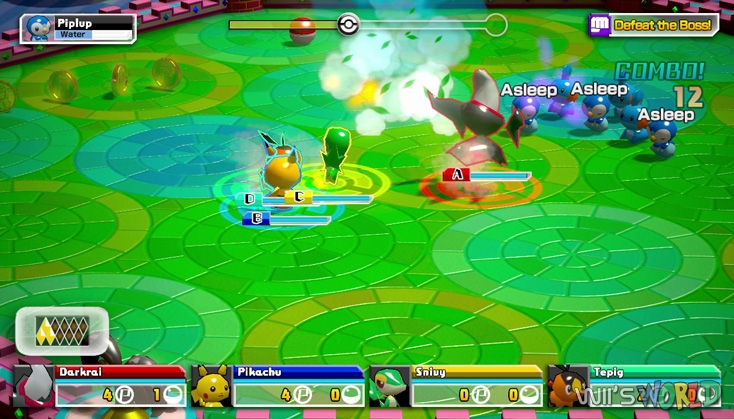 I bought Pokemon Rumble U on the eShop without any of the figures and tried it out. I thought it was pretty fun. You go through arenas, battling random Pokemon with your controlled character and three other Pokemon of your choosing. During the fights you can accumulate coins and more Pokemon, and you can collect MANY Pokemon. You will eventually fight a giant boss in each stage, which will become your ally if defeated.

Controls are very simple. You use the control pad or analog stick to move and you have two attack buttons. In some stages, you can also collect crystals which will give you a power rush and you will be asked to touch a button on the GamePad to attack enemies. This adds some extra depth to the game. Some would say that this game is pretty simple, but there's actually more strategy than at face value, as the Pokemon retain their strengths and weaknesses like in other Pokemon games.

Picking the right Pokemon becomes vital as you progress through the game. Your characters may do normal damage, little damage, or "super-effective" damage. The power level and movesets of your Pokemon are equally important. You will eventually have to let go of older, weaker Pokemon if you want victory. Some stages will even require you to play with certain types of Pokemon to unlock all the challenges for an arena, which leads to rarer and more powerful Pokemon to be at your disposal. 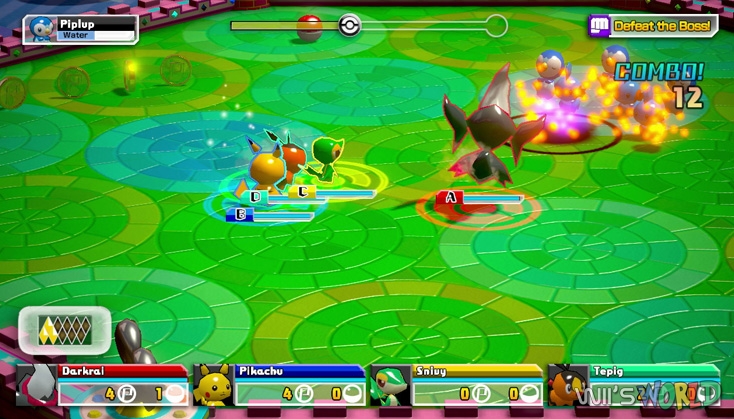 The music can be pretty good. Some of it is passable but there are some really catchy tracks in certain levels. Most of it is fast-paced, and as peppy and cheesy as it is, it fits the mood of the game. The sounds are well done, and very punchy, which gives you a very tactile feel when attacking enemies and collecting items.

So, should you try the game? It really comes down to whether or not you are up for collecting and trading the figurines. If yes, then by all means, go for it. If you just want to download the game, and avoid the figurines, then avoid it like the plague. The reason I say this is because the NFC figurines complete the game. First of all, all of those coins you collect can only be used on the Pokemon that you have figurines for. You can scan in the figurines, power up the Pokemon with new moves, new attributes, more power, more hit points, etc. Other Pokemon will eventually be discarded at your discretion while you get stronger ones, but the NFC figurines will be there, and you can truly get an advantage in the game by using them.

In addition, you can store the data in the figurine and take it to someone else's console, and play with the same figures over at their house. Plus, scanning in the figurines is a blast. I thought it would get old. But it's so much fun when you touch the figure to the GamePad and you hear that loud popping sound and your Pokemon appears, or when you are asked to hold it to power up and hear a charging sound. Without the NFC figurines, the game feels rather gimped.

Cheap cash grab? Yes. Fun and addictive? Absolutely, if you're willing to go all the way.