Don't bench it on looks alone.

Okay, so I won't lie to myself. I see these nice commercials for Xbox360 or for the PS3 and I get a tad angry at the graphic levels my little white box, so needless to say when I popped in Madden 10, and almost took it right out due to the vomit that I saw on the screen.

It wasn't what I expected, the characters were all arcade-like, the controls were new, it wasn't my old school Madden. I finally realized that I was angry because something was (god forbid) different, than what I was used to. 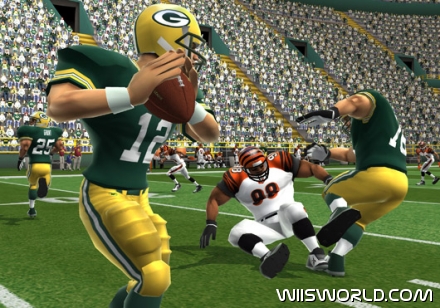 EA finally gave us what we wanted, not a port, not a dumbed down version, but a game made just for the Wii. So I gave it a shot, and I am so glad I did.

Am I here to convince anyone that the graphics are great, well, no, they aren't. They remind me of NFL blitz on the 64, the people at EA seemed to have went "You know, why bother with realism" and really gave us something new. I didn't say it was great, just new.

What I can say, is that they did the arcade style strong, and it grows on you. True, I wouldn't mind being confused on my game and the real world, but this isn't bad, just new. 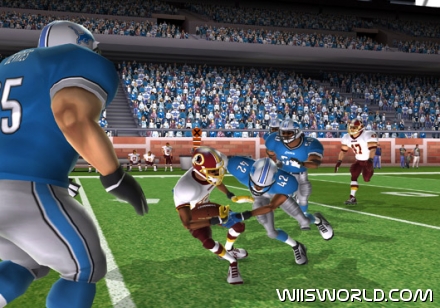 Those people at EA turned their attentions to the gameplay, which I am surprised how when I got used to them, seemed to really fit the game. You can control all of your pre-snap controls with a flick of the Wiimote, not to mention you can draw your own plays, which is awesome, it's something I really enjoy doing when it's 3rd and long and I want to do that perfect play how I want it. The Wiimote is also used to create the big hits, and swats/interceptions, which can get annoying, many times I find myself just shaking the remote to do something, not really doing one motion to catch the ball, which I would like to see the controls tuned up so when I actually want to catch a ball I can.

Modes are all there, online, franchise.. and for Wii players we have a lot of more mini-games, which is great for people who want to have fun, but haven't really touched a Madden game.

Last look--- Rent the game, see if the arcade style grows on you. I enjoy it, and I hope to see you online!