Published by Aksys, Developed by Gaijin

"People who cannot invent and reinvent themselves must be content with borrowed postures, secondhand ideas, fitting in instead of standing out." Someone's always said it better. That's Warren G. Bennis, surely looking into his crystal ball and offering a succinct summation about the tenets of BIT.TRIP BEAT. Or maybe he's talking about life in general, I'm not really sure. At any rate, it fits because BIT.TRIP BEAT (BTB) is as surefire a reinvention as you are going to see in video games. BTB takes Pong and turns it into a rhythm game. If I could come up with ideas that brilliant, I'd probably be a multi-million dollar developer, too. Indie devs get paid tons of cash, right? I think it's in their contracts or something.

Even if they aren't really millionaires, those guys at Gaijin sure do know how to make a unique game. In BTB you control a pong paddle, constantly deflecting balls flying towards your (paddle's) face that also happen to compose the stage music when successfully deflected. Block enough balls, and you'll get a high score while being treated to some decidedly well-composed chiptunes. Muck it all up, however, and the game will make it a point to remind you of how boring the original Pong's presentation is and what a favor they are doing for you by updating it. It's an inspired way to refurbish an age-old idea that everyone is familiar with. The core mechanic is simple, but the way in which it is presented is a stroke of genius. 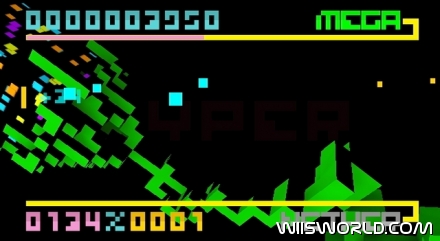 Presentation is, after all, what makes BTB so unique. The visuals and audio form a cohesive feedback unit, offering an effective manner of letting the player know exactly how he or she is doing. All those pleasing bleeps and bloops are gone if you can't put bat to ball, and that's the last thing you want to happen when the music is so damn enjoyable. The visuals, though simple, are very trippy and colorful, and follow the music like ducks in a pond. The "last chance before you die" phase offers up a stark 70's black and white palette that will immediately send you into panic mode. You can always measure your success by what you see and hear alone. Color and sound combine to offer a universal readout that engrosses the player, allowing them to focus purely on the task at hand.

It all comes together quite nicely, and the brevity ensures that the spell's cast never outstays its welcome. We are talking about Pong, after all. Any more than three levels is likely to wear on most gamers, especially with the sensory overload here. I welcome more music tracks, but a game like this is long-term enjoyment only for the most ardent score chasers and perfectionists. For everybody else, it's worth experiencing at least once, just to see what very creative people can do with a very old and basic concept.