I got a fever, and the only prescription...

If you are old enough to have had an original NES in your lifetime, then chances are you are already familiar with the classic puzzler "Dr. Mario". Donned in his best Neil Patrick Harris attire, Mario took time away from bashing Bowser and kicking Koopas to exterminate a swarm of red, yellow and blue viruses by tossing, of all things, red, yellow and blue pills at them. This was a simple formula, but one that some players found even more addicting than actual red, yellow and blue pills. The viruses are spread randomly in a jar, and Mario continually throws randomly colored two-sided pellets through the top of it. As the medicine falls, it's up to the player to align them so that they land on the same-colored viruses, who can be eliminated either vertically or horizontally. You were given three speed selections (slow, medium and fast) and a level slider that would determine the amount of viruses in the jar you needed to eliminate. It's a timeless design, and in 1990 it proved that Nintendo was fully capable of creating a simple and addictive puzzler that can be mentioned in the same breath as Tetris.

In Dr. Mario Online Rx that blueprint has been given a shiny new coat of paint, a new Wii Remote pointing mode, online play, and is now available on Wii Ware for 1000 points. The game features your classic Dr. Mario mode, played by holding the Wii remote like an NES controller. There are also Vs battles in the form of Regular (clear all viruses first) and Flash (clear specific viruses first) that can be played either against the computer or other people, both online or off. Also included is a Virus Buster mode, which can be played with up to four players simultaneously, that uses the Wii remote's pointer to control the falling pills. 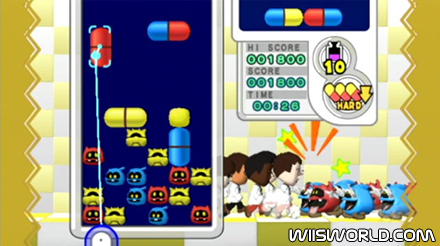 If you never played Dr. Mario, then that sucks, because it rocks. The game's accessibility is its strongest virtue. The game is simple enough to ease new players into the fray, yet complex enough to keep veteran video-game doctors coming back for more. It's a classic design that equally tests both your wits and your strategies, and is sure to keep you glued for a while if you have even a moderate interest in puzzle games.

Vs battles allow you and a friend to satisfy your pill addictions together. In regular mode, both players work to clear their own bottles. By linking combos together, you can cause extra pill pieces to fall into your opponent's jar, which can hinder their efforts. Flash mode works the same way, except instead of attempting to clear the entire field, players work to clear only specific flashing viruses. It makes the gameplay even more hectic and competitive, and the fact that both players can set separate speeds and difficulties means that newbies and vets can still play fun, balanced games against one another. It would have been nice if local 4-player matches were allowed, but the two-player modes already in place should satisfy most gamers out there.

The multiplayer features extend online through access to Nintendo's WFC. The game allows you to keep a friends roster that works quite nicely when seeking out your buddies for virus-busting duels. You can also connect against random players around the globe, and your stats are kept on worldwide ranking boards. In my experience, I did get kicked from a few games, but the interface for the online mode is very clean and easily navigated. The online community has good support as well, which is always nice to see, so finding random people to play against won't give you any headaches. 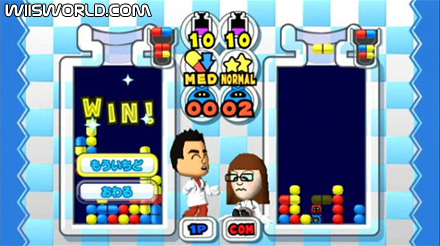 Last, and pretty much least, is the Virus Buster mode. Instead of using the standard controls, players point their Wii remotes at a zoomed in virus bottle, holding the A button to drag pills across the screen or tapping the A button to rotate them. Up to four players can go at it simultaneously. This isn't as addicting or as fun as the other game modes and really only serves as a minor distraction in a party environment. Most of you will check it out to see it, and go right back to the normal mode for good in less than 10 minutes.

The graphics are clean, but not exceptional. The viruses' colors are bright and smooth, and their humorous animations really help give the little buggers the character they deserve. You can select have your Mii throwing pills in place of Dr. Mario, which is a nice touch that adds a bit of personality to the package. The rest of the scheme is very basic, as everything seems to follow a bland (albeit inoffensive) white-and-gray-centric style. The sounds draw a lot of inspiration from the original games, but I think it would have been nice to see the original 8-bit music tracks alongside the newer, updated renditions.

Longtime fans of Dr. Mario will adore this game, without question. It faithfully recreates the balanced, addictive gameplay that made the game such a hit almost two decades ago. Aside from offering online play, however, there are no real significant updates to be seen here. The Virus Buster mode is a let-down in terms of longevity, so some people may feel that they are coughing up 1000 Wii Points for what boils down to an NES game. This is a valid argument, so the final decision to download, for those on the fence, will require some consideration.

It's Dr. Mario, so of course, it's awesome. Multiplayer modes are fun, and the online modes work really, really well. Virus Buster mode is lame, and where is 4-player Vs?

It came out 18 years ago, and it's still tons of fun. Online competition will keep you reeled in for a while.

Unobtrusive at best, but the Mii integration is a cool touch.

Music is faithful to the original scores, as are the sound effects, but I would have liked the original 8-bit renditions as well. Some of the catchiness is lost with the new tunes.