Does the formula hold up?

If you're familiar with Gradius then you know what to expect from Gradius Rebirth. You pilot a ship called the Vic Viper through horizontal environments, dodging a myriad of bullets, avoid collision with enemies and obstacles, and making sure to bolster your ship's strength by collecting power-up capsules.

The story in Gradius Rebirth is typical of all titles in the series. The Gradian Empire is once again under attack by the Bacterians. They take control of planet Antichthon, and use it to mount an assault on the Gradians. As pilot James Burton, it's your mission to stop the Bacterians from taking over the Gradian empire. It's not at all elaborate, but then Gradius games were never really known for having a compelling and deep plot, nor were they ever known to have a heavy emphasis on character development. 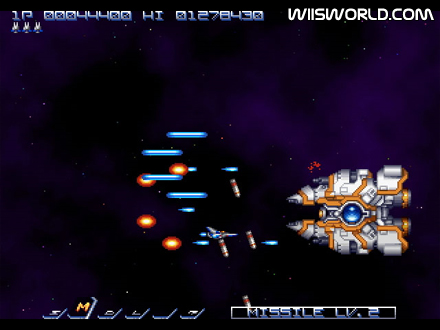 Much like the rest of the games in the Gradius series, you start off with a selection of ship types to choose from. Your shot type changes depending on the ship type, as well as the power of your shot, and your missile type. Unfortunately the ability to customize your ship type (known as edit mode) is not present in Rebirth, an innovation that was started by Gradius 3. What is nice though, is the wide selection of ship types that you get, I won't spoil any unlockables for you, but there's definitely more ship types in Rebirth than other title in the series. The options that a player can get through collection of power-up capsules have been simplified, going back to the traditional salamander pattern. So those of you who, like myself, prefer to change the pattern will be slightly disappointed by this. Despite Gradius Rebirth's high difficulty, it is actually quite forgiving in that you will not start over from the very beginning by getting a game over. There is no continue system in the main game, you simply end up at the beginning of each level if you happen to lose all of your lives; unless of course you're playing in score attack mode, which ends the game entirely if you lose all of your lives. You also have the option of starting from any level you choose, and any section of that level. So if you feel like you're inadequately powered up, you can choose to go back to a previous one and grind.

There are five levels to play through in Gradius Rebirth, each with its own unique theme and set of obstacles. From traversing a desert, to the inside of an organism, to fighting giant Easter Island heads, no two levels are exactly the same. Each have their own gimmick, like the first level's weather changing devices for example, which allows you to either leave the level neutral, transform it into an icy environment, or turn it into a very hot and volcanic area.

The graphics in Gradius Rebirth set off what Konami had hoped to achieve, a decent looking classic shoot'em up. They manage to make the game look authentically retro without Rebirth coming off as dated. Environments are detailed enough to pass as something that would fit today's standards of aesthetics, and the use of some bright colors in certain levels also helps. Backgrounds also have some detail to them; you'll notice that space isn't just black like in previous titles. Sometimes you'll see meteorites, land masses, and even planets. Rebirth's graphics aren't spectacular, but they get the job done and manage to be pleasing to the eye. Stage 2 in particular looks very nice, its use of bright colors and array of different stage environments makes it interesting enough to play through a few times. 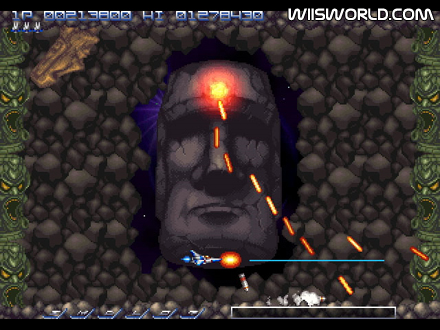 Sticking to its retro theme, Gradius Rebirth's music is classic 16 bit quality. There aren't very many good tracks in the game, but the good ones really hit home. Stage 2 has a very foreboding and almost chilling feel to it, and it fits perfectly in a level where you're traversing a giant organism's innards. The beginning of Stage 5's theme is rather questionable, in that it feels too cheerful for it; the second half is perfect and I only wish that Konami had kept it like it was before the update. The main boss theme is intense and really fires you up while you play, while the second boss theme seems almost silly in comparison. It's a real mixed bag, and some of it will leave you wanting to listen to it in your spare time, while others you just wish weren't even added at all. The sound effects are pretty par for the course, you'll hear much of what you heard in the arcade versions of the Gradius games. The sound of the enemies getting hit is pretty much the same as before, the sound of your ship exploding is the same, it's pretty much identical to the likes of Gradius 2 and 3.

Though there are only five levels in Gradius Rebirth, don't let that fool you into thinking it's a short game. You'll find yourself replaying these levels over and over again; it's difficult enough to keep you at it for a long time. On top of this is Rebirth's virtually endless well of difficulty, as every time you beat it on a higher difficulty, a new one opens up. For those of you unfamiliar, these are called loops. How they make this possible is rather systemic, and operates much like the arcade Gradius. As you reach higher loops, the amount of bullets that spray out of ships increases, so by the time you've reached say' loop 100, you're looking at several dozens of bullets spraying at you every time you destroy enemies. If that isn't enough to satisfy you, then the leaderboard may just be what you're looking for; players can compete for higher scores with each other online.

Gradius Rebirth, while not completely fresh and unique, is a solid title. Despite its short amount of levels, it still boasts incredible difficulty, and features that extend the gameplay long after you've completed it. If you're looking for a nice title to add to your WiiWare collection, or just trying to get your Gradius fix, then Gradius Rebirth is a good choice.