What? I'm a Phoenix Wright fan, do you have an objection!

I was really excited when it was announced that the Ace Attorney games were coming to WiiWare. No not because I intended to buy them, I already own all the Phoenix Wright games, I was excited because I'd get the opportunity to review them! With that said yes I am an absolute nerdified fan of the Phoenix Wright games, as if that wasn't already obvious with my constant crying over the exclusion of Phoenix Wright in Tatsunoko vs Capcom. The Phoenix Wright games are practically a parody of all those overly serious investigation shows people watch, and ironically it's that comedic parody that leads me to becoming more attentive towards their court cases than I would any CSI case I've seen (I like CSI too though XD). However I didn't make this review to go on about how much I love the games and I will attempt to review the game as unbiasedly as I can. 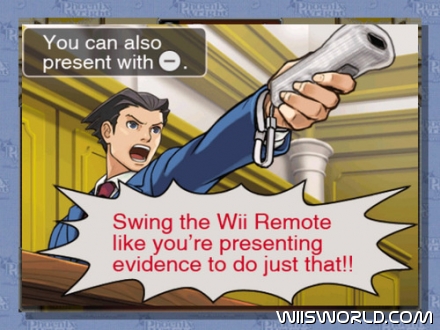 Phoenix Wright is a point and click investigation game, there isn't a great deal to the gameplay mechanics. You point and click (duh), and that aspect doesn't change much with the sparse addition of Wii motions. Simplicity isn't necessarily bad, the execution of the game is still well done. You play as defense attorney newbie Phoenix Wright, whose only true talent is pointing his finger and making random guesses. Your main objective throughout the entire game is to prove your clients innocent and find the true guilty culprit in a set of court cases.

The game is divided between two styles of play. First there are investigations, where you search for evidence and question witnesses. Then there are trials where you hear the testimonies of witnesses, question them, and present your hard earned evidence to point out contradictions in their testimonies.

Despite the simplicity there are a few common point and click flaws in the gameplay I feel need addressing. The investigations can feel a touch repetitive here and there, where in true adventure game style all you'll be doing is clicking on every square inch of the screen to find some clue, in a desperate attempt to quickly continue onto the much more entertaining trial parts of the game. 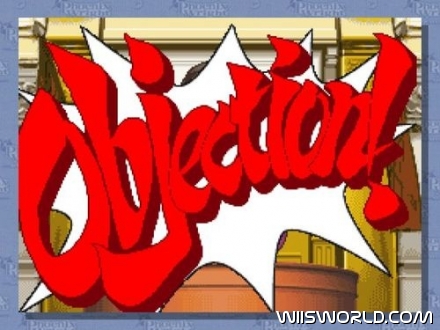 The writing is typically very funny, but that's not to say some of the jokes don't fall flat on their face (Larry Butz?). The writing can also be a bit cheesy, but hey if you could deal with Resident Evil 4's writing, then Phoenix Wright will probably be like a fresh breath of air compared to that. Regardless though the story is very enjoyable, the characters are incredibly original, each with their own distinct personalities and funny recurring jokes. That's not to say it's all about comedy though, the characters also have a surprising amount of depth and are emotionally well layered, giving the game just enough seriousness that you can take the overall plot seriously while still enjoying the comedy. Overall this game really is more of an interactive story than a 'game', so as a result is more reliant on storytelling than gameplay making it difficult for me to tell you how much you'll like the gameplay unless you're a point and click adventure sort of fan, but meh I enjoyed it.

I really like Phoenix Wright's art style. Just as all the characters personalities are unique, the same holds true for their appearance and hilarious onscreen expressions. I also like the way the text is presented to you in the game, if a person is angry, then the text comes in at fast rates, if they're nervous you see the text shake, and come in slowly. The camera angles are usually well done too and what's more the hilarious way the camera constantly flashes back and forth between Wright and the prosecutor, at a unnecessarily fast rate as they argue like some bad anime action scene gives me the impression that the games have as much a sense of parody for animes as they do for investigation shows. 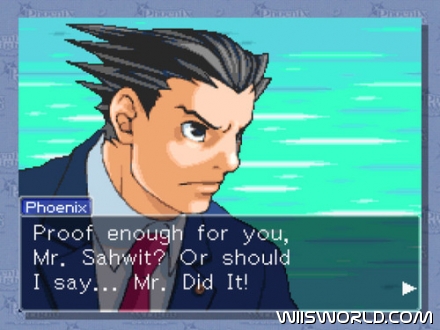 It's worth noting that the graphics from the handheld version of Ace Attorney have not been updated for WiiWare.

I absolutely love the songs in Phoenix Wright. It's not exactly the music itself, but rather how well varied the songs are and how suiting each song is for every situation they're presented in. Whenever I felt myself getting agitated at several of the previous mentioned gameplay flaws, I'd always have the music to help ease me back into the atmosphere of the game. 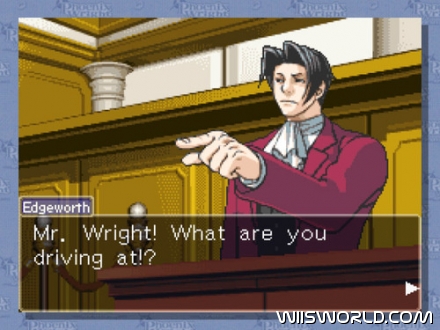 How much you play this game is all dependent on how furiously you tackle each case, and how much you enjoy the game overall. Since there are only 5 linear trials in Ace Attorney, there isn't much as far as replay value goes. However I see no problem with revisiting the game every few years when you find yourself getting bored. I've had my copy of Ace Attorney for quite a while, and like many good books I've read (as dorky as that sounds) I still come back to it here and there. Of course that is all dependent on how much you get into the game. 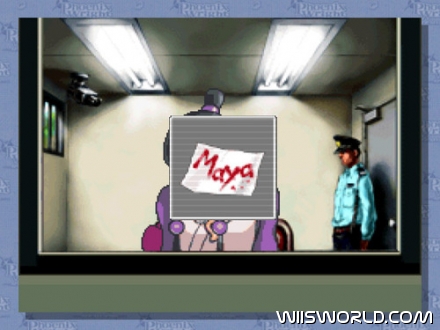 Phoenix Wright isn't for everyone but if you can excuse a bit of cheesy dialogue, you'll find it to contain an original story, funny characters, and loads of fun. Not to mention at only 1,200 Wii points it's worth at least a look by people who aren't into investigation shows or animes.

To my knowledge there aren't any differences between the DS and WiiWare titles save for the motion control interface. The prices for the DS versions vary a lot, but they're typically more expensive than 1,200 Wii points, so if you don't need the Phoenix Wright games to be portable, you might as well buy the WiiWare version.

Hmm funny this is one of my favorite game series ever made and yet I gave it a poorer score than any game I've reviewed so far. Meh this is why I prefer not using rating systems when I make reviews. Besides if there was a big grade fill in that said story I'd have certainly given that a 10.

Very nice review, at least you are truthful about the game unlike large gaming sites. I'll be probably picking this up in one way or another cause I always wanted to play this.

I'm really excited about this! I just saw it today in the Wii shop channel but unfortunately didn't have enough money. I've actually never owned a Phoenix Wright game and have only done 1 trial in the first game and I absolutely loved it! I'm actually well-informed about the game due to my obsessed friends.

I'm going to get this game today from the WiiShop channel, I'm just not sure which one to get out of the three. I've always wanted to try these games and after playing the demo for the new Miles Edgeworth game, I'm sooo excited.