Past and present, together again.

Released on most other major platforms, Retro City Rampage has had its time to settle in public. Admittedly, just about everything I'll say regarding it can also be applied to the versions on the PSN, XBLA, and Steam. However, given the fact that the WiiWare is almost all but dry of new and interesting releases, it's my recommendation that if you decide that this game be for you, choose that service, as apparently the game's creator, Brian Provinciano, won't get paid for his generous, costly porting work unless WiiWare sales hit a specific threshold, one that he doesn't expect to make.

In addition to my friendly PSA, you should note that the WiiWare version is also the cheapest of them all, standing at $10 instead of $15 on the alternative platforms. But whether or not you buy it, of course, all depends on the game's ability to enthrall its players. Without a compelling reason to play, the game might not be worth even the smallest of pittance. 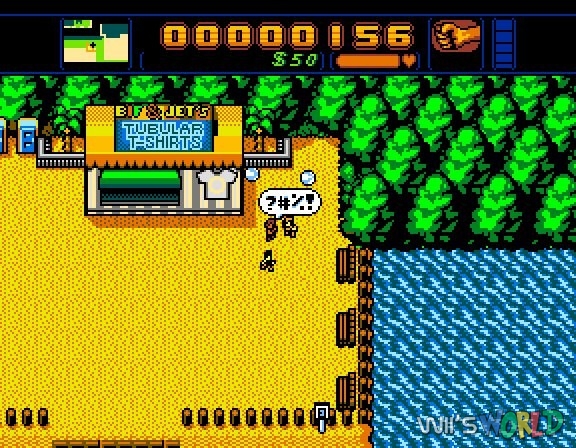 Luckily for you, there are a number of solid gameplay implementations and designs to qualify a purchase. Perhaps not for everyone, but many will likely find their time and money well spent, as Retro City Rampage has a delightful sense of action, pacing, and style.

In terms of action and gameplay, RCR is easily comparable to the likes of early, top-down Grand Theft Auto design. The player, who plays a character literally named 'Player,' causes wanton destruction and mayhem throughout a small city. Police chases, carjacks, and hit and runs are near constant occurrences. And to the game's credit, no waltz through the streets is ever boring or without some form of conflict.

It's a game that grabs and never lets go, letting the player find his or her own interpretable joy from the game's inherent engine, as opposed to more conventional Skinner Box and delayed gratification systems from MMOs and RPGs. I highly respect a game that can compel me with mechanics alone, and RCR manages to do just that. 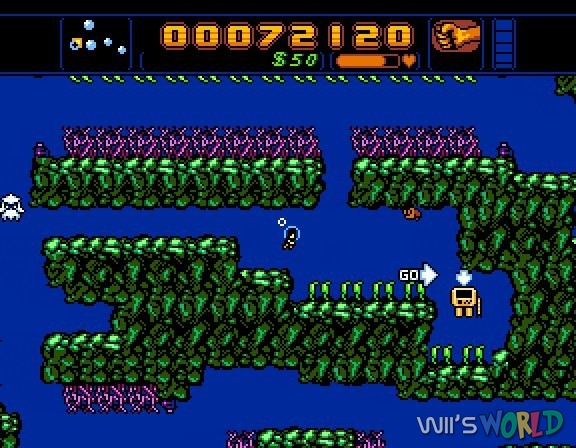 However, I've perhaps given the game a disservice by failing to mention one important, defining fact about the experience. The game is an unabashed love letter to the 1980s, pop culture, and the video game industry in everything from story, characterization, and looks. Perhaps most specifically looks, as the game is immediately recognizable as decidedly 8-bit. Spend enough time with it and you'll realize that it's more inspired by the graphics of the NES and Master System than solidly based on them, as its widescreen format, hyperactivity with often crazy numbers of onscreen sprites, and clean lack of screen tearing would make this game next to impossible to recreate on a actual system from that era. But a love letter need not be a full recreation, and admittedly the looser 8-bit style allows the game to function far better than it would have otherwise.

But graphics aren't the only way this game recalls that often forgotten decade. Nearly every story point, character, joke, and line of text manages to squeeze in some reference or nod. From constant jokes about the 8-Bit era to a Soup Nazi line, you'll slowly but surely feel as though you're drowning in a swirling sea of reference humor. I lost count of the jokes I noticed around the time I realized that counting would be pointless, as Provinciano went out of his way to fill every nook and cranny with reference joke after reference joke.

Now some of you will love this. If there's one group that adores parody of its object of fascination it's the convention-attending, TF2-cosplaying, Triforce-tatoo getting variety of video game fans. But reference humor doesn't do it for me. There's something indescribably cheap about a piece of media that attempts to derive humor from pointing at something recognizable and saying 'you remember that, right? By pointing it out I am therefore funny, laugh at how goddamn funny I am.' It's exactly why I despise Ray William Johnson and Tumblr, because both of those wastes of good evolution and technology fail to recognize that only the original get remembered. 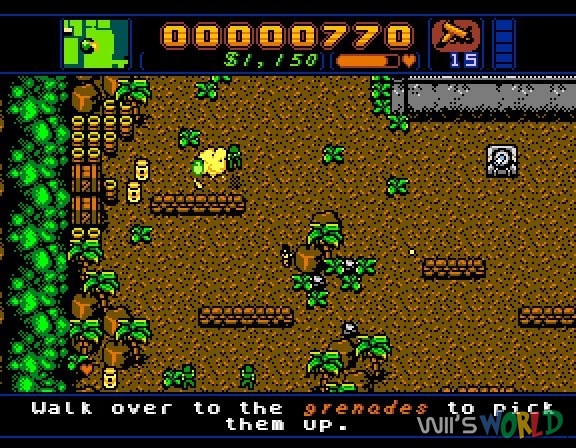 And this is Retro City Rampage's major, crushing flaw. Despite its solid, entertaining gameplay and satisfying world to explore, the game seems almost afraid to stand on its own. In the grand scheme of the artistic realm, Retro City Rampage comes representing very little, as it merely stands in testament to greater works that came before it.

You never needed to, Retro City Rampage, because at your core is an approachable, interesting game that can and does stand on its own. There's no need for you to cloud that with a Duck Hunt gag or a hovering powerup that gives Player raccoon ears and a tail. In fifty years I will not remember you, Retro City Rampage, because you forgot to bring your own spice to the party. Borrowing it from others will only get you so far.

But I digress, my rant good and done. I actually enjoyed my time with Retro City Rampage, despite my problems with the tone, and if you're also not 100% turned off by constant reference humor, there's plenty here to enjoy and justify a purchase. Even though it loses points for unoriginal humor, it gains the majority of them back by being legitimately fun. Now the controls aren't as clean as they could be and the repetitive police chases that get instigated every couple of seconds get very old very fast, but Retro City Rampage has gameplay depth and an engrossing world to play with. The story is legitimately fun to surge through and the challenges are varied, interesting, and appropriately over the top. And the WiiWare service certainly needs something to raise above its head as it slowly sinks into a forever oblivion.

This downloadable game was provided to me by the creator for the purpose of this review.