Published by Shanblue, Developed by -

Vampires, zombies and monsters, Oh my!

Lately there seems to be no shortage of famous monsters gracing our screens. Namely monsters that just want to enjoy their former glory. I admit that I am one with the masses that gobble up everything zombie related and will always look forward to the latest offering. Let's face it, zombies are there to kill and be killed in numerous gruesome ways. That is their main purpose in media. Vampires on the other hand have not made such a glorious uprising, well outside of the teenybopper Twilight series that is. Vampires have ceased to be "cool" and favorable amongst the general public since maybe the 'From Dusk till Dawn' movies. Shanblue, the Spanish developer of Vampire Crystals wants to set things right with this dual-stick zombie shooter, starring vampires as the heroes. Yep, you read that correctly.

The Thing about Vampire Crystals' crazy concept of blending zombies, vampires, crystals, skeletons and other crazy monsters is that it feels as awesome at it sounds. You play as a vampire armed with a machine gun and you shoot up zombies and monsters while collecting crystals to complete stages. And the game pretty much sells itself, so I can stop writing, right? Well, as amazing as the game sounds, there are just a few missteps. The story is pretty bare bones, but in a game revolving around blasting everything in sight including trees and houses, story is the last thing that I am worried about. 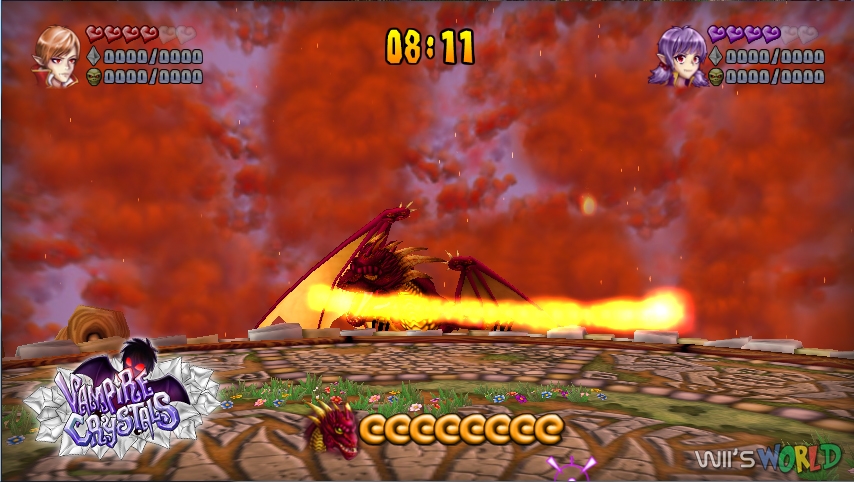 The game plays as a dual-stick shooter with power-ups and challenges along the way. I recently reviewed Nano Assault Neo on the Wii U which I did not favor because of its lack of originality. You will not find those same complaints here. The only real gripe that I do have is that while playing the game with the Wii Remote and Nunchuk combination, the controls seemed to falter. Since many people playing this game will most likely have a Wii Classic Controller, I don't see this as too much of a problem. Just know that dual sticks are how this game should really be played. That said, the game plays great and it's a real treat once you get a rhythm going with picking up powers, hearts and blowing everything up. This game isn't just fun for being a Wii game, it's just plain fun.

The visuals are the only aspect which will be compared to current generation systems. Vampire Crystals comes to us at the very end of the Wii's life cycle. While this is obviously a Wii game, the visuals are still very appealing. Everything has that mix of cool/cutesy style. The game does have a sense of humor, but I am not sure if the humor is intentional or not. Either way, it works in favor of the experience. Little touches like walking near spraying water to see just a hint of a rainbow shows that the team at Shanblue really put their hearts into this game. Honestly, transitioning from playing a beautiful Wii U title such as Batman Arkham City to this WiiWare game didn't bother me. The visuals work really well here.

The music in this game has a 'The Lord of the Rings' Middle-earth feel to it with a bit of pop mixed in. Although there are only a handful of songs, they are all wonderful and catchy. I had no problem listening to same song for a few stages in a row because of how much I was enjoying it. The sound effects are a little lacking, but fit into the Vampire Crystal universe well. 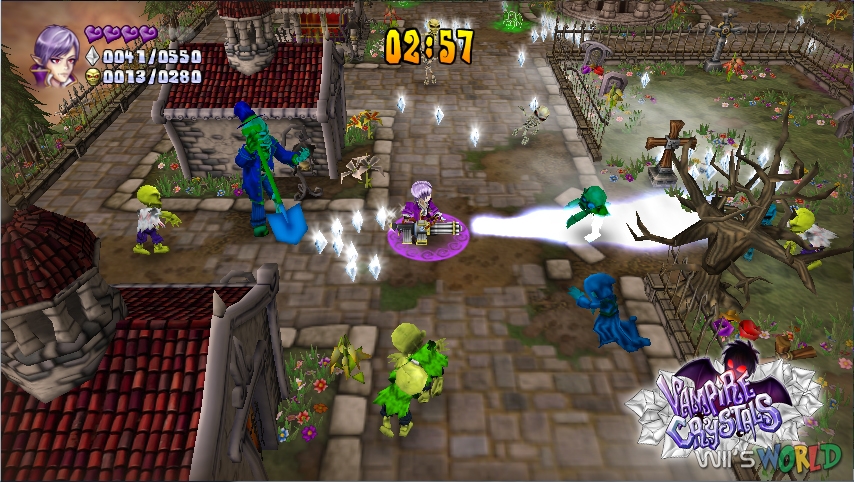 Vampire Crystals should take only a few hours to complete. There is a high level of difficulty to contend with, which at times seems unfair. Many times, a flood of enemies just come at you and quickly deplete your life gauge. Frustration ensues and the difficulty seems to make the game feel longer than it really should be. There are a few multiplayer modes to extend the fun and share with your friends, but all of the modes are competitive. If you favor friendly competition among friends, then this will serve as a great time for everyone playing. I would have loved to see an inclusion of cooperative modes, but you are still getting a lot out of this 10 dollar download.

All in all, Vampire Crystals is a great offering from a company that obviously has a passion for video games. It is ironic how a game about the undead can breathe new life into the twin-stick shooter genre. The unfortunate thing is that I would have loved to see this game on the Wii U. At the end of a console's life cycle, it may be too late for Shanblue to see much success on the overlooked WiiWare channel. After playing this game, I eagerly await Shanblue's next offering, hopefully on Wii U. If you have a Wii or a Wii U, do yourselves a favor and support a great company that has a passion for making great games.