Published by Gamelion, Developed by -

A reminder that there is something to be said for name brands...

The 10-in-1: Arcade Collection from Gamelion, available for download in the Nintendo 3DS eShop, is a set of re-imagined classic games meant as a throwback to the good old days of the arcade (though unfortunately it doesn't include any actual arcade games). These simple time wasters, with such creative names as 'Ninja Monkey' and 'Box Logic,' rely on many of the same - often the exact same - gameplay mechanics as their distant relatives. If only the quality was reproduced as well.

Black Nightmares is one of the more unique and enjoyable games in the collection. Something of a hybrid between the alien-shooting space explorer of Galaga and an inverse version of Tetris, the game has the player scooting left and right along the bottom row of the screen and firing projectiles at ever-descending rows of enemies. Health is limited, forcing the player to keep a close eye on what the horde is up to. This often means dropping projectiles or making attack runs at the player, whose options are to hide behind a barrier (which disappears after two or three hits) or simply move out of the way. It does offer something in the way of challenge, but the slow shooting speed makes it more tedious than it should be. 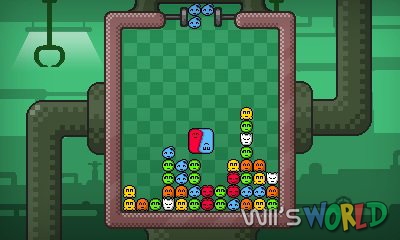 Gem Breaker is the classic game of bounce-a-ball-into-the-block that was popular on iPods and cell phones back in the days before mobile gaming became a thing. This version takes patience, practice, and more than a little luck to make any progress, but doesn't significantly differ (doesn't differ at all) from its origins.

Special Delivery is where the collection begins to move into the realm of cheap knockoffs. This is a Mario-esque sidescroller that takes away most of the player's control by moving the character automatically at a constant speed. For the first few levels, all the player can do is jump over repetitive minor obstacles and collect coins that you couldn't avoid if you wanted to. Eventually, enemies are added, not in the charming form of stompable Goombas we all know and love, but simple gray pigeons - who deal damage by hitting you with their droppings (yes, those kinds of droppings).

Ninja Monkey, probably the most aptly (if ridiculously) named game, is played by aligning a cursor at the correct angle to chuck shuriken (ninja throwing stars) at descending enemies. These enemies deal damage by sapping from a health meter once they reach the ground, so it's best to catch them in the air as much as possible. 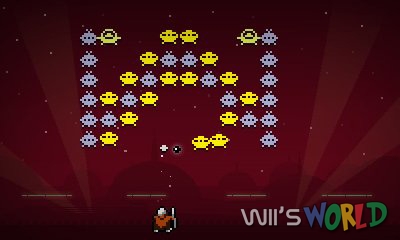 Every good game compilation needs a brain teaser element to it, and the 10-in-1 Collection delivers this in the form of a simple push-puzzle oh-so-creatively called Box Logic. The player must move boxes to marked locations in puzzles that slowly increase in complexity, mostly by adding more boxes and narrowing paths. The real challenge is to complete as many levels as possible before the countdown timer runs out, which requires a bit of quick thinking. Or a lot of repetition.

Tangled Space is a slightly more involved variation of Ninja Monkey, using a spaceship that must shoot down asteroids to clear levels. At first, this actually seems an impossible task, since most of the asteroids fall to the far sides of the screen outside the weapon range of the ship, which initially appears to be immobile save for the ability to spin on its axis. Further investigation, however, proved that the ship can in fact fly by selecting a direction and then pressing up on the D-pad, giving it a burst of propulsion. The lack of intuitive controls and mind-numbingly slow gameplay in Tangled Space are entirely representative of the overall quality of this offering.

The Collection continues to all but repeat itself in Perfect Landing, a flight game very similar to Special Delivery except for the presence of actual enemies and the ability to control horizontal movement. At least in this one, the automatic movement toward the target makes some kind of sense; generally you can't do much to control the rate at which gravity pulls you to the ground, but that doesn't mean this game wouldn't benefit from a little VTOL integration. Not to slow it down and make it easier, but to speed it up and make it less monotonous. 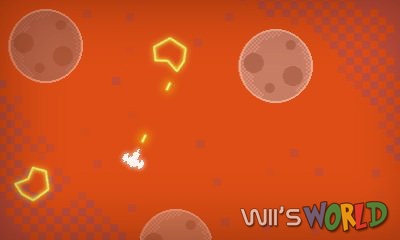 Saucer Room is a game that verges on unplayable, with the most counter-intuitive control design I have ever seen in a video game. The basic premise is to move one of those little robot vacuums (or flying saucer, I guess) around a room to collect items without bumping into walls, forcefields, or other obstructions. Simple enough, until you try to change direction. Clicking left or right on the D-pad, rather than the more rational method of using the direction pad to change direction, scrolls through a wheel that determines the way the disc moves. It may be worth a few attempts, but it's more likely you'll spend the game staring at the 3DS's circle pad, specifically designed for 360 degree movement, with a look of utter confusion. I suppose navigating with the pad would make the game much easier, but if you can't challenge a player without handicapping them with your choice of control mechanisms when you have an infinitely more logical alternative, I think the problem lies way back on square one.

Returning to the trend of imitating classic arcade games, Devil Maze - a gross oversimplification of Pac-Man - places you in a small, simple maze occupied by devilish creatures and a few targets that must be collected to move on, even including a powerup that lets you eat the devils. Although I don't feel nearly as attached to these black blobs as I am to Blinky.

Finally, the Collection ends on a high note (if you can call barely scraping the lower bounds of mediocrity a high note) with Ghost Cage, that game of drop-and-match with rows of items that you have to group by color to clear. I've seen much better iterations of this game, but, even compared to them, Ghost Cage is fairly entertaining. One of the few games in the Collection that I would use that word to describe.

Overall, the games in the 10-in-1: Arcade Collection fall into three categories: knockoffs, tediously slow, and downright poorly designed. In some cases, these qualities are compensated for by challenging and enjoyable gameplay, but otherwise this is nothing more than the cheap time-waster one would expect it to be. My advice: If you want a classic arcade experience, go for the real deal.