Published by G-STYLE, Developed by -

This shooter is off the chain

Chain Blaster for the Nintendo 3DS eShop takes the standard arcade shooter and narrows its focus to one central concept. As your ship weaves and shoots through wave after wave of enemies, you are capable of attacking with powerful 'chain blasts' that destroy not only the ship directly ahead of you, but any and all ships that are touching or adjacent to that ship. Chaining together these attacks racks up a higher combo and allows you to fire more of these powerful but precious blasts.

The game's plot plays out like a 1980s science fiction movie poster: the world's nuclear warheads have all been hacked by a sinister computer virus and the missiles are primed to launch all across the globe. With disaster looming, the earth's greatest minds have put together an anti-virus to confront the rogue code that is holding the world hostage. 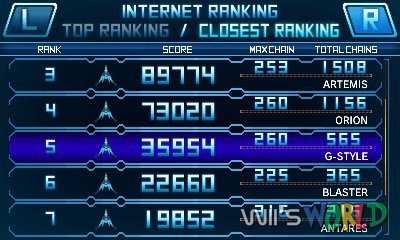 But cheesecake premise aside, all players really have to worry about is lining up those chain blasts. After playing a while it's still hard to determine whether the tight focus on the game's core mechanic is a flaw or not. After doing 50 chain blasts or so it becomes so routine that it honestly ends up being stale.

Enemy waves become faster and more complex as you progress of course, but there really isn't much variety and defeating each line of enemies always boils down to whether or not you can line up a chain blast. Even for an arcade title Chain Blaster is really simple.

While there is a challenge, and there are unlockable ships, the game is very straightforward and after a very short time the enemy patterns become really repetitive. 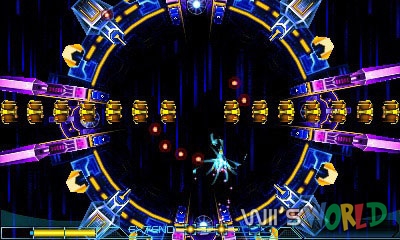 Chain Blaster looks pretty good in 3D, the effects as well as the pseudo-scrolling background work well together. The game is pretty notorious for recycling its resources, so be prepared to face a legion of identical enemies. Chain Blaster's soundtrack is an arcade inspired techno-club series of loops that set the tone well but are easily forgotten after powering off.

The extent at which you will enjoy playing Chain Blaster really depends on how much of an arcade enthusiast you are. There are some incentives for diligent players, but for many they won't be worth the effort.