Published by Bigben, Developed by Neko

New on the 3DS eShop is a little game by the name of Cocoto Alien Brick Breaker developed by Neko Entertainment. A strange break-out style game with a twist. You're a cat-like-thing instead of a rectangle. In Cocoto Alien Brick Breaker you control the adorable little cat-thing named Cocoto, Aliens come down to literally destroy the planet you're on and your mission is to make sure the oncoming horrors of projectiles doesn't touch the ground, the more projectiles that hit the ground the more holes appear and the more jumping you must do.

The game is broken up into several worlds with sub-levels in between; usually 16 levels each world. Cocoto runs around the globe to defuse the situation of aliens that are attacking, running from one spot to the next. It's a pretty simple game as the projectiles are rather slow and enemies are usually taken down with one or two hits (depending on the aliens themselves, some come equipped with shields while other require you to destroy the 'mother' version to defuse the others). 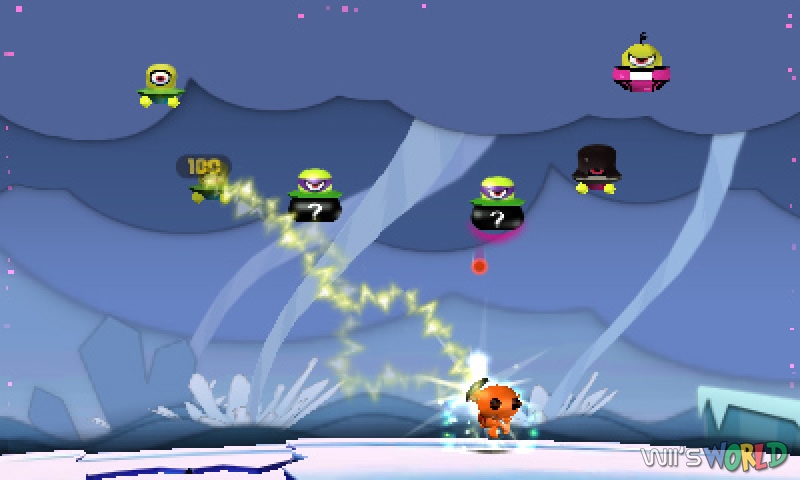 Along the way you can upgrade your shield to magnetic (it attracts the projectiles), to make it bigger, to collect and shoot and even make it a black hole, anything that hits the shield will come out from the top to create some good ole' havoc. Touchscreen is (thankfully) limited with it only being used to select different levels and add your signature, other than that it's all button played. Simply run left or right, jump and the occasional shoot. Perfect for anyone to pick up and play. Graphically it's a bright colorful game with likable looking characters. 3D effects are used sparingly throughout but do create a bit of depth of field on the game. It doesn't add nor really disrupt anything, it's barely noticeable when turned on give or take a few cut-scenes and opening logo. Sound isn't too bad but pretty forgettable.

There are many different modes added as well, you can play story, classic or arcade, the latter just being an endless run of waves. That's where the problem in Cocoto Alien Brick Breaker lies. It's good for a brick-breaker-styled-game but it gets really dull really fast. The enemies aren't really that much of a challenge and although they try to mix things up with various aliens, it just gets 'meh'. For what it does it does well it's just something that won't be addicting like Break-Out. The boss fights are the highlights of the games with specific shots you have to make but because you're bouncing the objects back, you can spend too much time on trying to aim it back rather than getting it over with. The game is too easy, and it's almost near-impossible to fail due to a lack of challenge.

Surprisingly the game also has a Streetpass function that allows extra tokens to be awarded if you've beaten high scores of others that you meet. It's nice to see this feature as some people forget it exists, but the odds of you running into someone is very rare and probably not worth it taking a spot on your Streetpass.

Cocoto Alien Brick Breaker isn't a bad game, it's just very generic. It doesn't add anything new to the break-out version (except a cat). It gets repetitive very fast, and the levels, although plenty, are just adding an element of aliens on top of the last.