Published by Rocket, Developed by Climax

At some point, every kid has probably imagined being a super cool spy. Wearing expensive suits featuring all the greatest high tech gadgetry and, of course, driving a tricked out spy car. This is the advertised premise of the 3DS title Crash City Mayhem (which is a much more accurate summary of the game).

In Crash City Mayhem, the player takes on the role of a former spy turned driver-for-hire operating in a city where cops barely bother chasing bad guys and nearly every object in sight is designed to be run over with a car. The player, after suffering through a tutorial more thoroughly mundane than my actual Driver's Ed course, is tasked with various missions, such as retrieving valuable commodities or acquiring items from around the city, usually by the 'men in black'. And no, not the alien hunting kind. 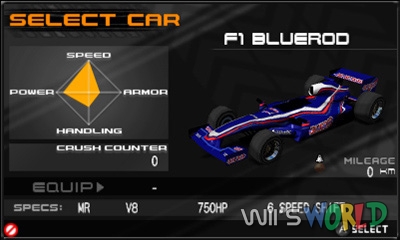 These missions are generally very simple, often complicated only by a strict time limit. Or the occasional geographic annoyance: roads that abruptly end with a straight drop into a body of water or apparent shortcuts which do not actually take you where you need to go. The objective of the mission is (theoretically) secondary to the opportunity to drive around causing massive amounts of... well, mayhem. Every object destroyed while driving is given a monetary value, added to a cumulative total which greatly affects the overall score. These objects can range from something as simple as a bench or window to a fast-moving semi truck or even a stationary helicopter.

The game's incredibly nanny-esque menu/guide system encourages the player to go all out and have fun racking up as much of this kind of damage as possible to attain a high score. Which is convenient, since the delicate controls and prevalence of sharp turns makes it nearly impossible not to take out a few lamp posts or news stands on your way to the rendezvous. This idea, if a bit of an odd addition to an apparent secret agent type racing game, can actually be fairly enjoyable. However, the game completely contradicts itself by including a damage meter, which quickly fills with every hit to the vehicle and ends the mission upon reaching the damage limit. The player can choose a free-for-all mode which removes the damage meter, but that only makes me wonder what the point was of including it.

Within the main story (for lack of a better term), players can unlock bonus items and upgrades for the vehicles, though most of these adornments have no discernible effect on gameplay. The missions, while enjoyable and even challenging at times, give very little satisfaction upon completion. The game sometimes even requires you to return to previous missions and complete them again on a higher difficulty - which is to say within an even stricter time limit - in order to unlock new ones. 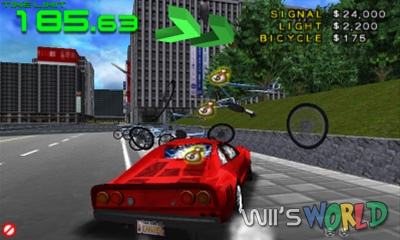 Everything about this game - its design, gameplay, graphics, dialogue, and even sound effects - is overwhelmingly bland. This is a game with little substance that is meant to provide some mindless entertainment in life's random dull moments. And, in that capacity, and only that capacity, it more or less succeeds.