Becoming Cube Master is a fun diversion for the price point.

The concept of Cube Tactics is simple: place or stack cubes on a grid to bolster your defenses and create new units. The goal? Infiltrate your opponent's territory and destroy their core cube.

Cube Tactics provides simple gameplay mechanics that can be used to develop complicated battle scenarios. There are 24 cube types, ranging from environmental cubes with their own status effects or durability, like swamp, grass, or brick, to specialized unit cubes, like castles for knights or forges for carpenters who can repair cubes. There are also traps, catapults, and cannons, the latter of which can destroy cubes - including player territory, so pay attention to where you point them. 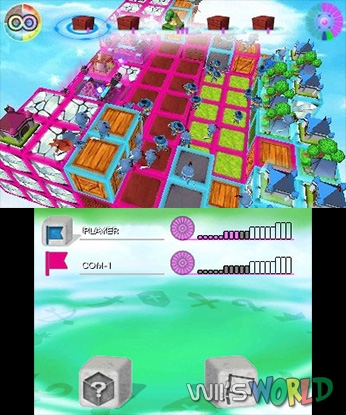 Cubes are placed on a small, medium, or large grid depending on the level specifications, and they can be stacked on top of each other to create barriers that must be climbed or they can be placed side-by-side. If you place four of a similar unit in a square, you will upgrade your units to a more powerful form. For example, four castles can be upgraded to a royal castle, producing more powerful knights. As with the cannons, but for different reasons, pay attention to the direction you place these bases on the grid, as that's the direction units will come out of their base from; have them facing the wrong way and it will take that much longer for them to get anywhere, and there is also less of a guarantee that they will attack units nearby if that's not the direction they're pointed toward.

Cubes are selected from a cube table on the top 3DS screen, each with tallies indicating how much energy it will take away from the player's energy bar for that turn. It can be frustrating sometimes when certain cubes offered in a level do not show up in the cube table for spans of time, but cubes can be taken out of the table and deleted until something shows up that the player wants. However, doing so still takes up energy from the bar, so players need to pay attention to how they are or are not using cubes.

Player cubes can only be placed by other player cubes. Blue signifies the player, whereas red, yellow, or green signifies the opponent. Players start out just with their core cube and must build out from there. The player's units will march from their bases to engage enemy units, and if either side gets to the opposing core cube and destroys it, it's game over. Also, as your troops destroy enemy castles or bases, those cubes convert into player land. That of course goes for enemy troops conquering player land as well, so it is important not to just haphazardly place units on a map. If they are too weak they'll be destroyed and you'll lose vital space in which to maneuver. Another way to lose land is if witches are nearby, as they can convert player unit bases into enemy bases. 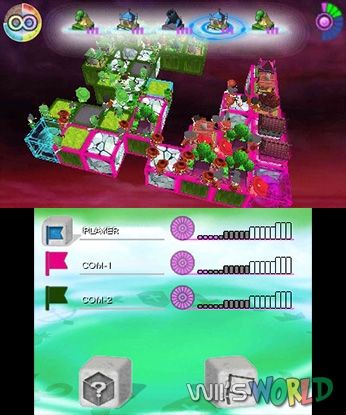 Cube Tactics is a game that can require a fair amount of strategy and planning - a good thing given the 'tactics' in its name. Battles can take anywhere from 30 seconds to 11 minutes and beyond. A nice fast-forward button is included, as sometimes matches can drag on while a player is waiting for units to make progress, especially if there is a momentary deadlock. Should a match seem like a lost-cause, there is a 'surrender' option on the touch screen which will end a game with whoever surrendered losing. The touch screen also gives players a chance to find out which cubes are available in the level and what they do, as well as how much energy all players / AI have in their energy bars. Tapping on yours or an opponent's icon will show individual stats such as play time, trophies, etc.

However, the actual single-player mode of Cube Tactics is fairly simple for the most part, and it's really not until the end of the quest mode that the difficulty noticeably sets in. The extra quests offered after completing the main quests are challenging, receiving difficulty rating stars of 6+ out of 5 for each subsequent level. There are 25 levels in the main quest, though most serve as an extension of the five-mission tutorial players must take before starting the missions. The focus of the game seems more placed on the battle royale and online modes. Battle royale is simply a customizable single-player mode that allows someone to play against the AI at a difficulty, grid-size, and time limit of choice. Online functions the same way, with users able to create or join matches.

Medals can be earned by completing single-player quests, fighting online auto matches, or by upgrading units a certain number of times in a battle. Medals seem primarily designed to encourage players to try out different modes of playing, but the stat boost they provide are at least useful in some way. Up to five of these medals can be equipped at a time, and they offer bonuses such as stronger core cubes or more energy. 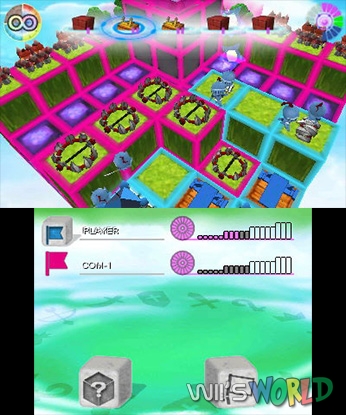 Depending on skill level, the main quests (not including extra quests) will take around 6 hours to complete. They serve as a good introduction before setting players off on their own to play the game against others or just the AI. Matches can be set to 5, 10, or 15 minutes, or they can run without a timer, ending finally when a core cube has been destroyed.

For the $4.99 price point, fans of tactics or strategy-based games really can't go wrong here. It's a simple-looking offering design-wise and graphically, but it gets across what it needs to with what it has and that's all it needs. The game does suffer, though, from sporadic lagging when three or more parties are fighting against each other due to the amount of action that can happen on-screen. Also, the minimal track offerings for the music may begin to grow tiresome as well, but for what it is it's well-done. On the whole, Cube Tactics is a decent game to play alone or with friends. It's simple, but it provides enough variation and difficulty for players of all skill levels. It can be an addictive and entertaining way to pass the time.