You won't find Nemo in this Odyssey.

Fishdom H2O: Hidden Odyssey is an odd little eShop game that is all about discovering underwater rubbish. In order to earn money for an aquatic exhibit, we dive into the deep along with Jennifer, an ambitious marine biologist to salvage some of the random items that clutter the ocean floor. Players can customize three of their own digital aquariums by filling each environment with a variety of fish and several decorations.

The main stages of them play out sort of like those old "I SPY" books where you read off a list of items on the top screen and browse through the bottom screen scavenging for everything from sunken treasure and sea life to household items and antiques. You can zoom in and out of the static scenes and pan around using the circle pad or touch screen and to select an item you only need to tap it. Tapping around wildly or randomly on the touch screen counts as a series of bad guesses and you'll be penalized by a visit from a few very obstructive fish who badly obscure the entire screen. 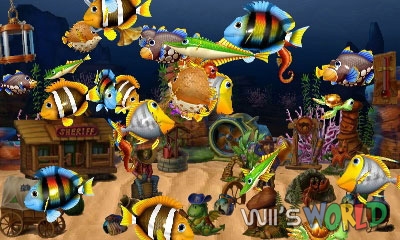 When you first begin the game you are given the option to play timed levels or to salvage at your leisure. Either way the game really plays out the same and after a few stages you'll either be very bored or sucked into scavenging. My major complaint is that Fishdom isn't very much of a "video" game in the sense that the levels and elements are not interactive. The reward for clearing each stage is unlocking new pieces for your aquarium but honestly how much fun is staring at an aquarium?

The unpolished menus and eerily animated cutscenes present the story of Jennifer and her new career as a marine biologist. As you gain 100% in each of your fish tank's three categories you unlock new themed aquariums but there really isn't that much variety between them.

Fishdom H2O: Hidden Odyssey isn't for everyone. While the "I SPY" aspect of it is amusing, unlocking fish items is hardly rewarding. Overall it just doesn't feel like a video game in the traditional sense and more like a ported iOS app.