Gummy Bears Magical Medallion is a bright and colorful platforming adventure that is sure to appeal to a younger audience. Heavily influenced by traditional side scrolling games of yesteryear, the game serves as a basic introduction to the platforming mechanics that modern gaming often takes for granted. 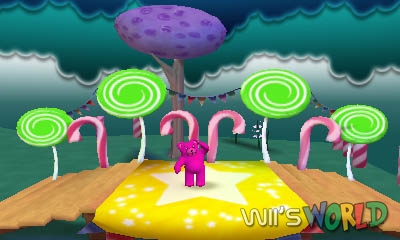 Originally released in 2011 for the Nintendo Wii, Gummy Bears Magical Medallion has been adapted to take advantage of 3D graphics and touch screen based controls.

Each level is full of vintage platforming tropes and gimmicks such as ladders, swinging ropes, springs and checkpoints. The Crazy Candy Army are constantly on patrol, although the enemy AI makes them only passive threats compared to the amount of traps and jumps that stand in between the goal and your Gummy Bear. 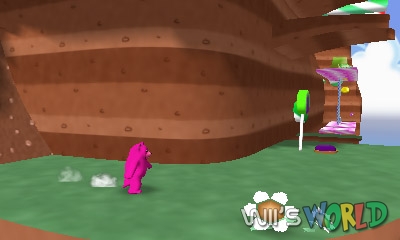 Gummy Bear Magic Medallion offers a bare minimum level of presentation in what seems to be an unpolished menu system. The graphics themselves are animated well and the characters and environments all exist in a consistently cheerful world accompanied by a fitting score of upbeat muzak. I did notice some frame rate slowdowns at times but they were uncommon.

While the gameplay mechanics are generally competent and the double jumping is a real highlight, there are still some jumps that don't feel entirely fair. There are several touch screen elements that require a heavy amount of swiping back and forth which I feel may be harmful to the 3DS' touch screen if not executed properly.

It's hard to really identify the sweet spot that Gummy Bears Magical Medallion occupies. It has some good platforming elements and decent physics but there are many moments where it seems like the game's difficulty spikes at odd points. It is an enjoyable adventure game for younger players but I wouldn't expect that it will delight audiences of all ages.