Who's up for some put put?

The Gummy Bears are back on the Nintendo eShop and this time it's all about Mini Golf. I guess when they aren't saving their kingdom from the evil King Sour Berry the Gummy Bears are all about family fun activities. So grab your putter and lets get to the course.

After you select a profile and pick out your favorite color Gummy Bear you can head to the game's main menu and head into the following modes: Free Play which is exactly what you'd expect it to be, Career mode where you can earn coins to unlock costume pieces and custom equipment for your Gummy Bear. 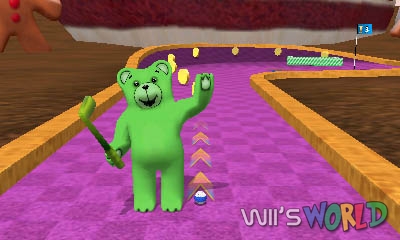 In League mode you compete with a CPU to get the lowest score and a Multiplayer mode allows up to four players to take turns on a single 3DS console and compete against one another in any of the game's four courses. This adds a whole new dimension of "local" multiplayer that isn't too common these days for handhelds.

Once you've selected whatever gear your prefer, you and your Gummy Bear can head out to any of the courses you've unlocked and play each hole in order to try and make par. Some gameplay modes allow you to skip certain holes altogether if you find yourself stuck on a tricky one.

Controlling your Gummy Bear as he lines up his shot is fairly straight forward but requires delicate use of the 3DS' touch screen. Only during your first shot are you allowed to slowly slide your Bear's beginning position from side to side, and during each subsequent shot you may only adjust the angle of your shot as well as choosing its strength from another adjustable bar at the bottom of the screen. Unlike some golf games where the power behind your strokes is determined by some time-based button press, you have all the time in the world to decided just how much of a push your ball needs in order to reach the hole. 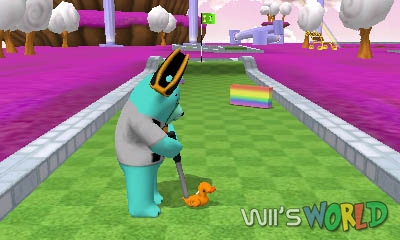 Angling and aligning shots is crucial to succeeding in Gummy Bears Mini Golf. As one would assume all of the typical mini golf pitfalls make some sort of appearance within the game. Bumps, moving/spinning objects, tilted floors and water hazards all stand in-between your Bear and the course's hole.

Without a real grasp on how the games physics work it is difficult to progress and set up effective shots. After some trial and error you may find some success in mastering the dodgy touch screen controls or you might just end up fishing for your balls in an infernally placed pond.

Gummy Bears Mini Golf definitely caters to a younger audience but really anyone could enjoy it if they give it some time and really tinker with those touch controls. Does it have a perfect score? Not exactly but it is fun under the right circumstances.