Heavy Fire: Black Arms 3D is a former WiiWare title now for the 3DS that is good at grabbing your attention. With a fun type of gameplay right from the start, it is easy to immediately want to go on missions and complete your tasks. However, it doesn't have the ability to keep and hold your attention for long.

The game is an on-rail shooter which puts you in the jungles of South America against an illegal arms trader. You start out the game as a Private and work your way up as you progress through various stages. You may be on foot or in a vehicle, but your enemies will always be running out in front of you for you to shoot. You use your stylus to aim and the right or left bumper buttons to fire. This makes for some gameplay that can get repetitive rather quickly. 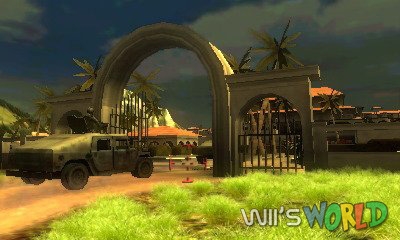 Each skill level comes with its own gun to use. Even though this works well in later stages, it is frustrating to get through the first stage with a weaker gun that you cannot upgrade. Add to this the difficulty of only having five lives and having to start over at the very beginning if you die. The tough part is if you reach the end of a stage with only one life left, and you have to shoot the enemies in the order they come on the screen (or else they will shoot you first), if you are unsuccessful, you die and have to start the entire stage over. The fact that they blend into the background in some areas makes it harder to detect them and you'll find yourself dying unexpectedly.

The game is not bad looking. The enemies come onto the screen smoothly and when they inevitably fall, they don't do so in a clunky way. The environments look great considering that it was ported over from the Wii. The cut-scenes in the middle of the stages help the gameplay move along as well as try to keep you interested in what's going on. However, you have to be ready to take on double the amount of enemies. If you are low on health, this means that you must be good with your shot since there isn't anything to heal yourself or any checkpoints to save your progress.

In short, Heavy Fire: Black Arms 3D is a good start to a shooting game, but there could have been more variables added to enhance the experience. There are a few things keeping this game from being an enjoyable experience and without them it makes the game easy to put down after playing it only a few times. Marked at $4.99 in the eShop, it's fun at first, but will leave you wanting more.