Mahjong 3D: Warriors of the Emperor

Published by TREVA, Developed by -

Mahjong, a classic puzzle game believed to date back to ancient China, has been a favorite of small game developers for many years. In the Westernized, single-player version of the game, a player must match pictured tiles in pairs to clear the board. The game has been published in digital forms across several Nintendo platforms for many years. Mahjong 3D: Warriors of the Emperor, available for download from the 3DS eShop, is a story-driven collection of puzzles that offers an enjoyable interactive gaming experience.

In Warriors of the Emperor, players progress through a series of themed levels by clearing Mahjong boards of varying size, arrangement, and difficulty. The levels are cleverly divided into Chinese provinces, with boards representing different forms of progression, such as building a bridge or winning a battle, to tie into the campaign's storyline. The Mahjong boards are displayed on the 3DS's top screen, while the lower touch screen serves as a mouse pad of sorts for moving a cursor. This control scheme seems a bit uninspired or even disappointing, given the ease and improved user interaction of simply putting the board on the touch screen and tapping the tiles to play, as similar games have done in the past. The board is also slightly minimized to show more of an environment, which can make it difficult to identify matching or open tiles. A player can use the circle pad to move the camera angle on the screen, but this is not particularly useful for getting a better view of the board. The controls take some dedicated adjustment, but the core gameplay is both soundly designed and enjoyable beyond the mild annoyance. 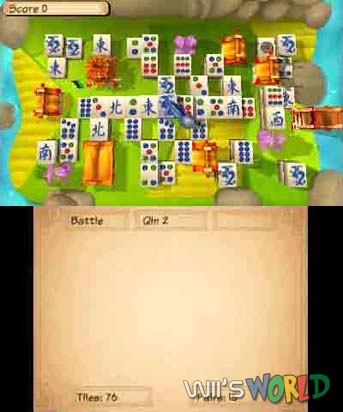 Many of the boards have a set time limit and/or feature specific objectives, such as matching two gold tiles or obtaining a higher score than an AI opponent. Some of these are not always obvious when beginning a puzzle, forcing players to pay close attention to the board's layout and the information subtly displayed on the edges of the screens (the appearance of a countdown timer, for example). The use of these specific components feels rather sporadic, particularly early in the game, but they give an appreciable dash of flavor to a very old formula. Another interesting addition is the ability to use certain power ups to aid in clearing the board. These are limited use, and completing the puzzle without using them will grant a bonus. A score is recorded for each puzzle based on tiles matched, power ups saved, and time left on the clock (when there is one).

Throughout the simple, but well-constructed, storyline, the player will meet new characters who explain the significance of progress made by clearing Mahjong boards. The various provinces are added to the young Emperor's territory, through conquest or diplomacy, upon completing puzzles. Some characters encountered in the story become "allies" to your cause, giving you a wider variety and greater quantity of power ups to use on later boards. The entire experience is enhanced by a pleasant oriental soundtrack.

In addition to the main quest, the game includes a Quickplay mode, where players can play simple standalone puzzles under a time limit, and a puzzle creator. Using this feature, players can create their own Mahjong boards with customized tile layouts, power ups, scenic props, and even backgrounds.

Mahjong 3D: Warriors of the Emperor, despite certain limitations in the control scheme, cleverly combines classic Mahjong design and video game elements to deliver a very satisfying, if simplistic, experience that is perfect for anyone who wants to pick up and play a challenging puzzle game, whether for minutes or hours.