Me & My Furry Patients 3D

Me & My Furry Patients 3D review

Needs a good shot in its own arm

Me & My Furry Patients 3D couldn't expect to rest at the same level as EA's The Sims or Sim City, and in fact doesn't come close. The game places you in the position of an aspiring veterinarian, setting up shop just outside of town where you treat the patients brought to you. Slowly you'll expand your practice and gain knowledge so you can treat more animals. Unfortunately, while the concept is great and certainly not one that developer Independent Arts is foreign to, the actual game falls short of delivering a satisfying gameplay experience.

The gameplay is standard sim fare, but unlike the greats in this genre Me & My Furry Patients 3D suffers from its highly repetitive nature and few customization options. As a veterinarian, you are tasked with the maintenance of animal pens and houses. Make sure you have a good supply of medicine and animal food, which you'll need when you treat in-patients. The better care you take of in-patients, the more money you earn in exchange. 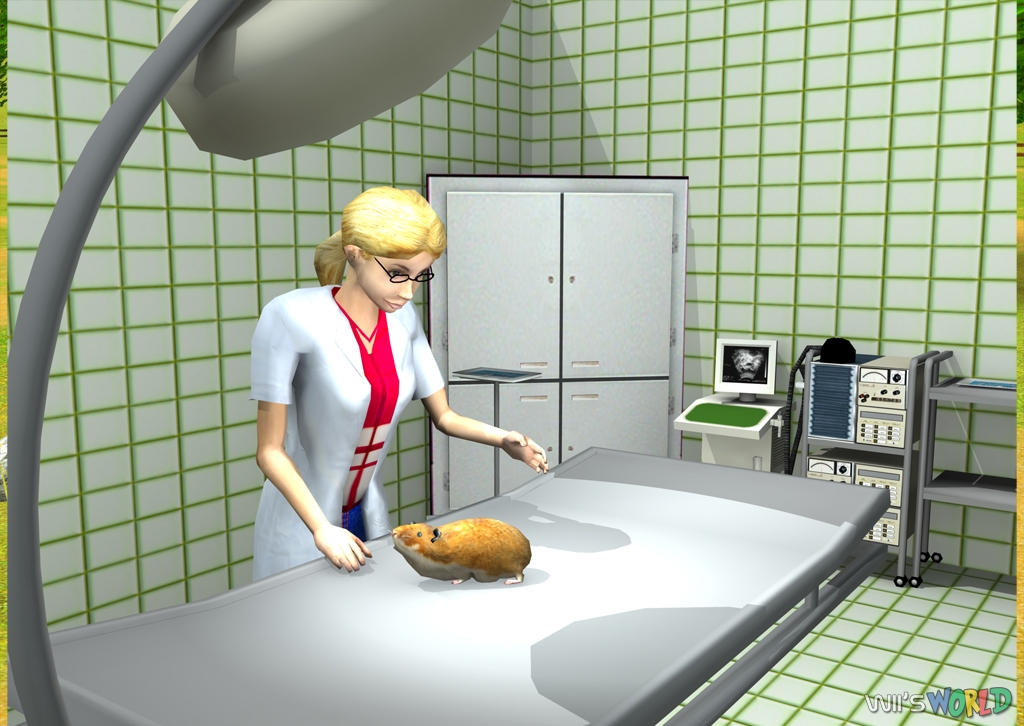 But the act of caring for animals gets very tedious. You need to make sure they have enough food, keep cleaning the pens, and pet the animals so their happiness doesn't get too low. That's all well and good, but there's very little pay-off except for a nice pay check. Everything about the game is too stats-based without enough interaction with the environments. When you reach the level of being able to take care of dogs, you have the option to take them for walks. Sadly, the player doesn't actually get to do the walking, you just have to watch a short animation of your character slowly walking a dog around a small stretch of your land. It's an exhilarating experience, to be sure. Horse riding is a bit better, as it opens up a sort of mini-game where you actually have control and can ride the horse around, jumping over barrel obstacles. It's still not thrilling, but it's at least something in an otherwise fairly dry experience.

Even treating the animals becomes rote. You select the medication for each case and give it to the patient, but you'll find you're just giving the same treatments over and over. Antibiotic + tonic, and you're done. Maybe the next one just wants a tonic. The other may want an anti-inflammatory cream, disinfectant, and a tonic. The repetitiveness of this game could be chalked down to the nature of the job, but there's little of anything exciting going on with the treatment of animals. It would have been nice for much more variety in cases. Sure, we don't like to see animals sick or injured, but if you're going to make a game about playing vet, give us something exciting. Continuously getting animals with vitamin deficiencies or weepy eyes doesn't make for an exciting narrative.

There's also little risk involved in treating patients. An anxiety meter fluctuates above an animal when you're treating them, but unless you give them the wrong medicine that meter doesn't mean much; it isn't about to erupt on you. It only lowers once you provide the proper treatment, but there's no sense of immediacy in administering the medication because no animal will try to scramble. If you happen to provide the wrong treatment, you're simply scolded with a text box saying the owner won't be pleased and won't return anytime soon. But, you've no real reputation to break, as other clients will continue to come at their regular flow. You'll probably see around 7-8 patients in a day on average, unless you opt to promote yourself through a flyer or television ad. That isn't really necessary though, as you'll easily earn enough money to complete all of the provided game tasks by the 12th in-game day. 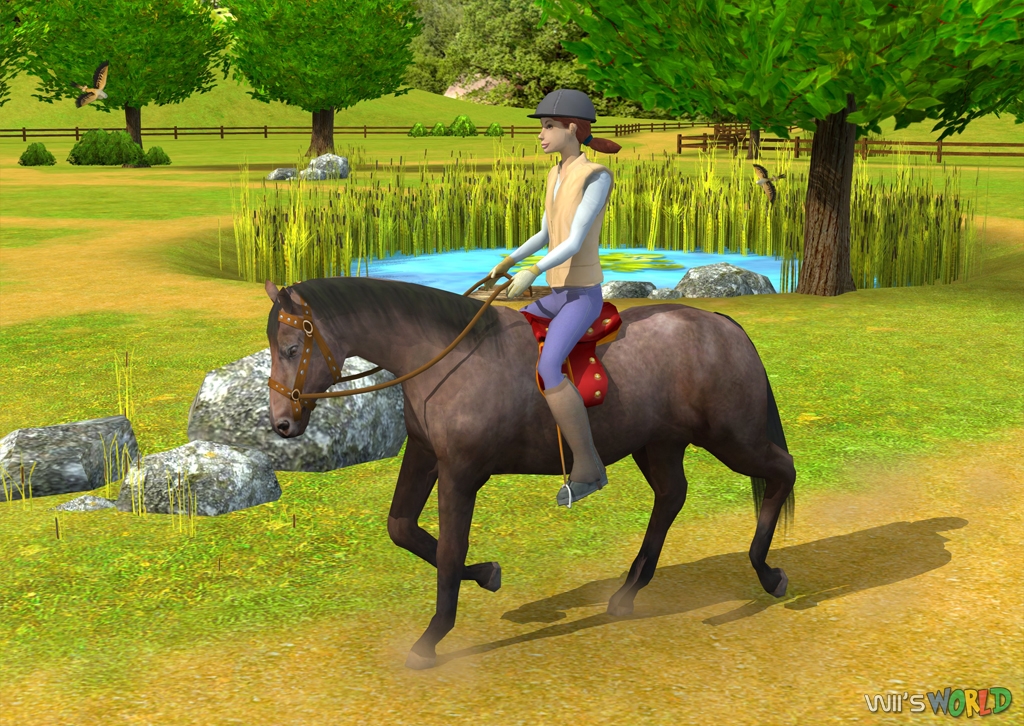 Tasks include going to the academy to learn how to treat new animals, expanding your practice and animal shelters, and treating certain animals for the first time. By the time you've completed all of the tasks, there's not much more for you to do in the game except continue being obsessive about taking care of animals. You may as well spend the time you'd do that with worrying over your real-life to-do list.

The academy sections themselves are also fairly pointless. It's a nice idea to make players qualify for new abilities, but the tests you have to take don't really relate to your job. They're just basic explanations of the animals to educate the player, for example telling us that horses are herd animals. Should you fail the test, you'll have to earn enough money to retake it. But really, they're simple enough that you'd actually embarrass yourself if you failed. As they are, the tests are just monetary checkpoints preventing you from treating cats, dogs, and horses right from the start. More relevance to the field of medicine or greater stakes in relation to the game in general would have been welcome.

The gameplay mechanics themselves work well enough, save the exception of feeding the animals. When you're in the pen with guinea pigs, rabbits, and budgerigars, you've the option of what food you'd like to take from your food stock right there in the pens. When you want to feed cats or dogs, you need to go back to your practice, pick up the food, and then go back to the pens. When you're tending to the tediousness of caring for pets before patients arrive in your practice, it gets a bit annoying not to have the option to choose food in the pens, especially when you can for a different set of animals. 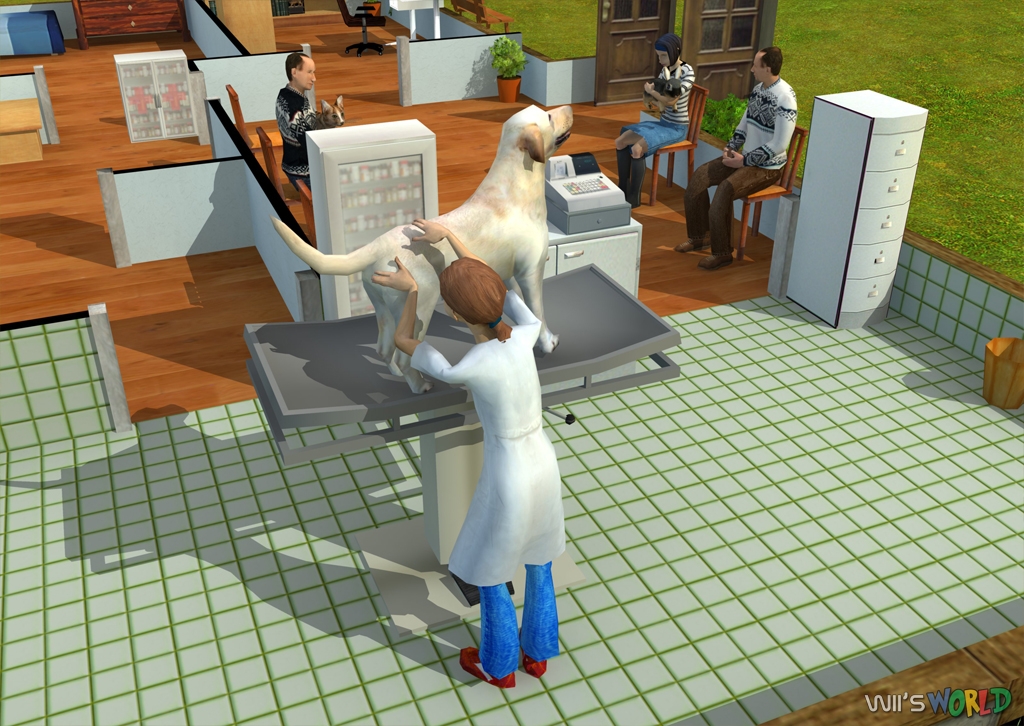 The in-game clock also goes maybe a bit fast, but given there's little to do in the game otherwise, it's probably a good thing. Having the option to fast forward time yourself always is a nice feature, but with this game you generally have to keep rushing from one thing to the next anyway. Unless, of course, you find yourself with few animal in-patients or incoming patients, in which case you'll just be standing around wondering why you aren't playing The Sims instead.

The general graphics actually aren't too bad. What really bites this game visually, though, are the text box designs and their general aesthetic. The text itself is poorly edited and absolutely uninspiring to read. Much of it repeats from one patient to the next, so really the only thing you care about is the treatment instructions at the last page of the 3-4 page text rundown. You might not think text boxes could be such a big deal, but it's noticeable when a game focuses much of its content through poorly edited text wrapped up in bland aesthetics.

Character models look alright, but they really only come in two variants: a male model and a female model. They look the same beyond those basic distinctions. The animals at least come in different colors, but you'll soon get tired of treating Old Henry the guinea pig or Felix the cat. Different colors, similar names and diseases. You can also see that the animal models and some character models weren't rendered cleanly. The models themselves look fine as they walk around, but you can still see some black outlines pop up around them. It happens quite a bit, but though it isn't too disruptive, it shows the lack of polish that feeds into the rest of the game. 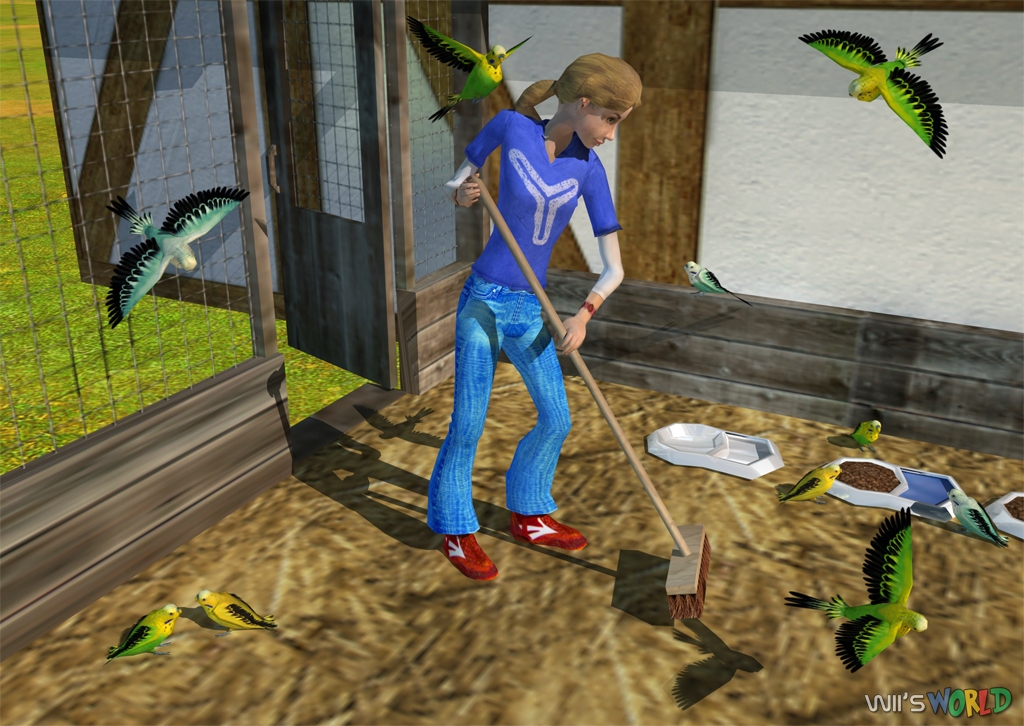 The sound is inoffensive, but it's hardly memorable even as far as sims go. Some voice overs come in for greetings/farewells and the like, but otherwise the sound design is fairly minimal. Cats will meow and horses will whinny, but otherwise there's not much here. Not bad, but not good.

Me & My Furry Patients 3D likely won't last much longer than it takes you to build all possible extensions to your practice and be able to treat all 6 available animals. The game doesn't offer anything to really motivate you to keep playing past its task list. It's an alright game for what it is, but it certainly doesn't seem polished enough for $30. Maybe give it a go if you're a real nut about sim games and want to play veterinarian, but otherwise I'd say just skip it and invest your time into The Sims. Me & My Furry Patients 3D is an average sim game suffering from a lack of true design polish and adequate gameplay options.