Those mutants won't go down without a fight!

Mutant Mudds is a simple platformer that takes place on multiple planes you can jump between. The main character has a jetpack he uses to traverse the levels. The goal? Collect 100 gems in every level and reach the warp exit. However, some mutants/aliens called Mudds have invaded, making this a lot harder. Luckily, you are also equipped with a blaster to take out the muddy scum!

It is quite a slow-paced game, particularly compared to most Nintendo platformers. The character doesn't move very fast and his jetpack helps with correcting mistakes. The meditative pace is a good thing though, because after the first few levels the difficulty ramps up considerably. You will need expert timing for jumps and always be on the lookout for enemies just beyond the edge of the screen that will pop out as you land. The game definitely demands you re-learn some of your skills because most of the platforming is quite precise. It is an unforgiving game that will remind you of the NES era. 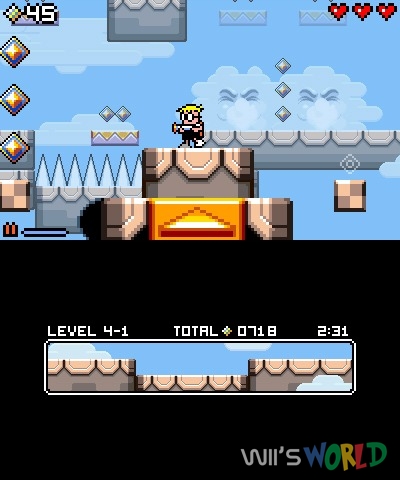 The game's old-school design is replicated in its graphics. According to Renegade Kid the graphics are 12-bit. I find that description fitting, the aesthetic is simple but stylish. You will see the classic platforming level tropes: green hills, ice, lava, cloud, etc. The game ticks all of the reference boxes. It is self-aware, but is more celebratory than deprecating. The plane switching makes awesome use of the 3D screen, highlighting how immersive the effect can be when used well. The music in the game is another nostalgic nod to the past. At first I loved the plinky plonky tunes, however by the end of the game they did start to grate on me a little.

The unforgiving nature is a double-edged sword. The biggest problem is that there are some crazy difficulty spikes. In particular, the last level in the game. I honestly had to play it about 100 times, if not more. It wouldn't be a huge problem if there were checkpoints, but there are none. If one segment of a level is troubling you, to get to it again you have to replay the whole level, EVERY time. Doing so over 100 times was infuriating, I almost gave up. I appreciate a challenge, but it should be well balanced.

Once you have completed the levels, you get the opportunity to access all of the secret G-Land and V-Land levels hidden within them. You need to use upgraded gear to gain access, which you can get from your granny, bit weird, but whatever! These levels are short but very tough and demand expert platforming skills. They are some of the best in the game though. They also have super cool Game Boy (G-Land) and Virtual Boy (V-Land) graphics. Referencing Nintendo's first handheld and 3D systems on the one that combines those two features is a neat touch.

Overall, I would wholeheartedly recommend Mutant Mudds. I think it's a fun little platformer that is intelligently designed for its host system. There is no doubt that the game has its problems, namely a few unfair levels without checkpoints. However, it has a nostalgic charm coupled with great gameplay. Sometimes, that's all you need.