More of the same

Pyramids 2 is one of those games that you can just pick up and play during short breaks throughout the day. It's easy to get the hang of, and while you can speed your way through the platformer's early levels, the game picks up in difficulty near the middle stages. You also have the ability to play the levels out of order, so if you get stuck you can skip to the next. Eventually you'll need so many stars to unlock the next pyramid and the set of levels contained within it, but for the most part you can pick and choose, making this game even more ideal for pick-up-and-play.

Gameplay itself is simple and much the same as the original. In the game you're a treasure hunter, and your goal is to escape from pyramids: find the trigger to open the portal to the next level, then collect gold on your way to the portal. In order to move through levels, you can create or destroy blocks. Sometimes opening a portal is as simple a matter as building a bridge of blocks going to the opposite end of a level vertically and then dropping down to the bottom of the screen where the portal is. Other times in order to open portals you'll need to dodge darts or build your way around purple vortexes that prevent you from building anything. Especially in later levels when bees or other enemies come into play, you'll need to be more strategic about how you go about placing - or destroying - blocks. To help combat enemies though, outside of trapping them with blocks, you're able to collect bullets for your gun. You'll have to be careful how you use them, as there are a finite number of bullets per level that you have at your disposal. 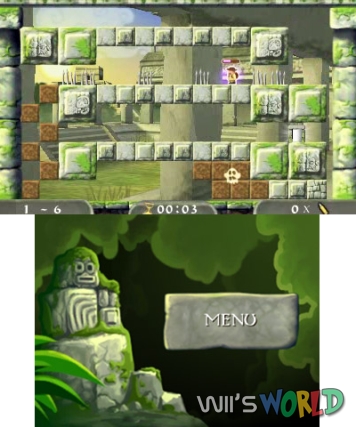 It can still be difficult sometimes to lay blocks where you intend, however. If, for example, you're too far to the edge on your current block and are trying to make one directly adjacent, sometimes the block will appear an extra space over to the left or right, depending where you were trying to lay it. These problems can be a nuisance, but they're easy enough to overcome and aren't terribly detrimental to the game itself. They can just slow you down if you're trying to earn stars by staying within the time limit before its counter reaches zero.

Going back to levels you've previously beaten to earn stars does increase re-playability, but Pyramids 2 also comes with a level editor. You can create your own levels to play through or share with friends, so if you get tired of the main game or stuck, you can head to the editor and extend the game's life a bit. This is a feature new from the first game and, if you really enjoyed Pyramids, will make getting this one worth it so you can create and customize levels to your liking.

Overall though, Pyramids 2 can get quite a bit repetitive after a while. It's increased its difficulty level from the first game and there's enough in the game to keep dedicated players occupied, but Pyramids 2 kind of loses some of its charm after a while. It's good in small doses, but it gets a bit redundant.