Rage of the Gladiator

Published by Gamelion, Developed by Ghostfire

Rage of the Gladiator review

Rage of the Gladiator has you beating Greek mythology foes in sort of a Punch-Out style, except with magic.

You take control of Prince Gracius of Avalance, a gladiator who has been put into a prison for killing his father (he was framed I tells ya!). His torture is your entertainment as he is put in an arena to battle with some crazy, vile, villains. This will require a lot of replays and attempts but it's all worth it. 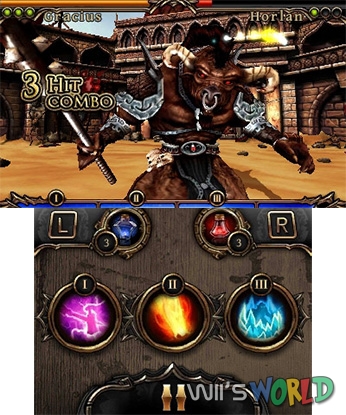 As you begin, you'll be happy to see that the tutorial is short and sweet, giving you all the basic controls that are really easy to remember. Dodge, jump and block will be your closest allies. While the touch screen will be used for mana and health and all around easy touch-screen options.

You take on a single foe at a time but as the matches go on they become bigger and stronger versions of themselves, sometimes they look like a completely different enemy than what you were originally facing. You need to have three "knock-outs" to progress. This of course means you only have three chances as well. If you fall you get rewarded with gold still but must redo the battle, if they fall, well, you move on to the next person.

Luckily, you can heal yourself during the battle; healing items can be purchased at the in-game store along with new weapons, armor and skill points. You are awarded more skill points as the matches go on along with coins (or gold) to be used in the store. You'll find yourself frequently visiting it after every match trying to earn more and more for that special weapon or armor. 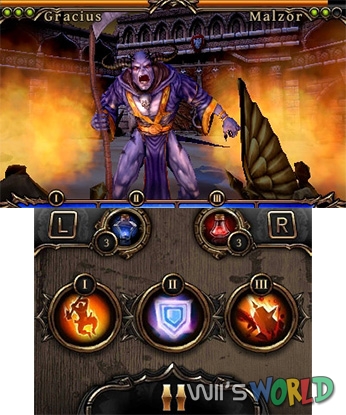 Skill points can be used to upgrade your attacks or specials. Specials are fun to watch and really satisfying depending on what you choose. You can continue using magic as long as you have mana. Mana, like health, can be purchased and used at any point, however, unlike health; it regenerates with time giving you a bit of a heads up during battle.

Like Punch-Out you'll have to learn to remember your enemies' patterns. Know when to dodge and know when to jump, timing is key. Some enemy attacks are so out there that you won't really be sure how to evade it, a monster with eyes on the end of each tentacles shooting what looks like a spray of blood at you for example still leaves me wondering how to avoid this attack. Others are pretty simple to recognize, but again, it's all about how much you pay attention.

At first the enemies are simpletons that can be defeated without trying but with each level you go to they're bigger and stronger and will leave you in awe as you helplessly watch your butt get kicked. Tagon, Horlan the Crusher, The Sea Witch and Master Yee are just some of the people to expect to meet in battle. Some are really easy (like Tagon) and some can rot (like the Sea Witch). 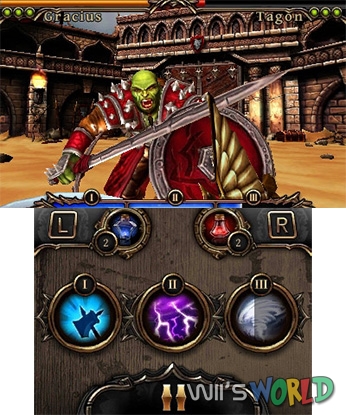 You won't mind facing up to these foes because the game looks great. The 3D effect adds depth, which is a shame as I would have loved to see more pop-out effects rather than distance, but the villains all look fantastic. This is complimented with surprisingly great voice-acting that give these horrible beings personality, some will make you laugh and some will freak you out.

Rage of the Gladiator is a fantastic game. It knows what it is, a portable game that can be played it bite-sized chunks. Play for 10 minutes or play for hours. It's a challenging game that doesn't take itself too seriously. The 3D effects are nice, the voice acting is great and the gameplay is awesome. For the asking price of $7.29 you can't go wrong with this title.