Published by Teyon, Developed by -

Can you control a horde of robots?

Robot Rescue 3D is a strategic puzzle game that can be downloaded from the Nintendo eShop for the Nintendo 3DS. With 120 levels forcing you to strategize and plan, this game will keep you busy for a long time.

You take control of a large number of robots that need to escape the labyrinth they are in. For this to happen, you must guide them to the gate in each level. The catch is that whatever direction you move, every robot on the screen moves. This means that even though you may be guiding one robot to the gate, you could be walking another right into a bomb. This is where thinking ahead comes in to play. 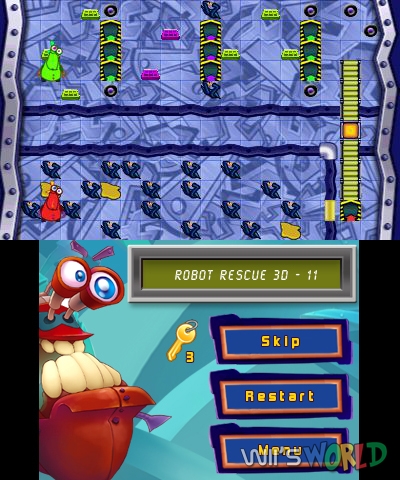 Strategy plays a big role when you're trying to direct all of your robots to their gates. At first, the game is simple with one gate and two or three robots at the most. As you progress through the stages however, more difficulties are introduced. These include painting your robots different colors to go through their corresponding gate, using glue to slow them down, and hitting switches to open sections for others to go through. This is what keeps the game interesting and fast paced.

The good thing about Robot Rescue 3D is that it includes the last two games in the series, Robot Rescue and Robot Rescue 2, which were both sold as DSiWare. These games are easier because they not only have tutorial levels which can help you progress your way up to harder levels, but their first levels are simpler as well. If you've never played Robot Rescue before, it might be a good idea to try these earlier games instead of diving right in to the harder levels. And if a level proves too difficult, you can skip it. However, you are only given three skips and if you want them back you have to complete the levels that you skipped over.

The game's colorful levels make it easy to become immersed, it has a cartoon style and the robots are very expressive in everything they do. When the 3D slider is on, the walls that block the robots' progress are more clearly defined, but that's it for what the 3D does to improve things. 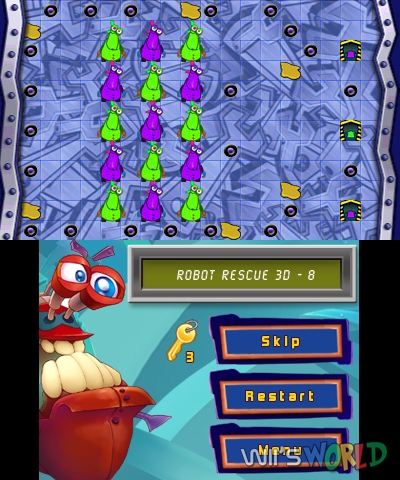 The music is a bit darker than what would be expected for the style of the game, but it doesn't take away from the overall experience. The only irritating thing is that every time the robots move, they make a sound that can get a little annoying after about 20 minutes.

Robot Rescue 3D is a good pickup game. What it lacks in music and 3D graphics, it makes up for in fast gameplay and mind bending puzzles. This is a game you will want to play if you like puzzles, cartoons, and missed out on buying the old Robot Rescue games.