Published by Big John, Developed by -

Bowling is one sport that is associated immediately with the casual player, and Smash Bowling 3D definitely fits that label. But for an inexpensive eShop title maybe this game's casual focus isn't so bad.

Smash Bowling's control options almost make it seem geared toward those who bowl for a league. Sliders indicate how close/far from the lane you want to stand, how much spin you want on the ball, where you're aiming the ball, and where you're going to stand to throw (though, as with real life, how you actually end up bowling the ball can sabotage this process). The touch screen controls are the most user-friendly, making this a great fit for the 3DS. The sliders are manually adjusted, and when you're ready to bowl you swipe along the touch screen. The game can be finicky when deciding the speed of your throw, but as long as you don't drag the stylus along you don't need to worry about slow speed derailing the ball's course. 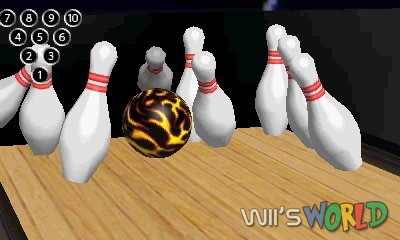 Opt for the button controls, however, and prepare to be annoyed. Whereas with touch controls it's easy to move the sliders to indicate movement around the lane, with the button controls you have to time a button press to stop the automatic slider that goes back and forth. It's easy if one is patient and willing to wait and watch for the red arrows to stop shifting on the lane so you can roll the ball at just the right spot, but it doesn't make much sense as to why the slider controls couldn't have just been determined using the directional arrows instead. It's actually probably quicker just to use the touch controls anyway.

Design-wise, this game keeps it simple. The alleys, balls, and pins are nice renditions of their real-life counterparts, though the only real variation - outside of ball designs and colors - comes from the images above the lanes themselves. Fourteen different lanes are available, most of which have to be unlocked by gaining certain achievements like overall points for all games bowled, the number of games bowled, or getting so many strikes in a row. But, few of the lanes seem very inspiring, with some, like the Far East, being a bit too cliched. Thrown in are a few adverts for other Big John Games like Coaster Creator 3D and Thorium Wars, an old DSiware title. The screens are clean and easy to navigate, though, which is nice; the player's score and remaining pins are shown on the top screen, while the bottom is saved for manipulating where the ball will be rolled.

The music lends the most toward the casual label, as you'll for sure be put to sleep by its light, acoustic tune tinkling away in the background while bowling, with the crash of pins timed out to the track. Sound effects are mostly spot-on, except when spare pins are picked up and there's no sound. Occasionally an enthusiastic voice will say 'Good spare' or 'Great shot,' but it's hardly invasive. Music can be turned off, as can replays. 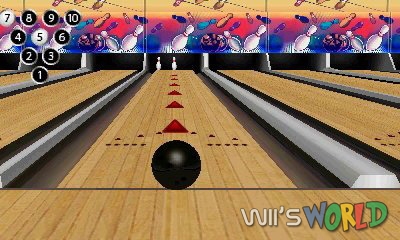 Other gameplay options include a practice mode where players can manually insert or take out pins to work on getting hard shots, as well as a multiplayer mode where a single 3DS is passed around like a controller - which seems a bit strange in this day and age of wireless connectivity.

Though it lacks the strength in gameplay and unique design to make it more of a recommendation over competition, all in all Smash Bowling 3D is a casual title for those who want to be able to just pick up and play every once in a while.