80s action movie rolled up into a classic arcade package

The premise is this: the Pacific Isles have established an extremely efficient hydroelectric energy system, and everything is fine and dandy. Like any action movie though, a terrorist organization known as "Grid" attack the Isles to seize the energy for themselves. They are led by the supposedly infamous Doctor Synchros, who sports a nefarious eye patch. That's how you know he's evil, right? You take control of the titular Captain Raymond Foxx - these names are just something else - who is the dashing, hot-headed cocky action hero that we all know and love. Usually. You've also got the reasonable, trusty sidekick Gunner who is there to calm Foxx down, and the typical handy mechanic Wrench - seriously, the names are going to be the end of me - who keeps track of your upgrades. Let's not forget the token sexy but sassy female Doctor who's there just for the sake of romantic interest for Foxx. Point is, Strike Force Foxx knows that it's trying to recreate the over-the-top cheesy G.I. Joe feel, so it never takes itself too seriously, which leads to a charmingly simple but entertaining story that works out in the end. 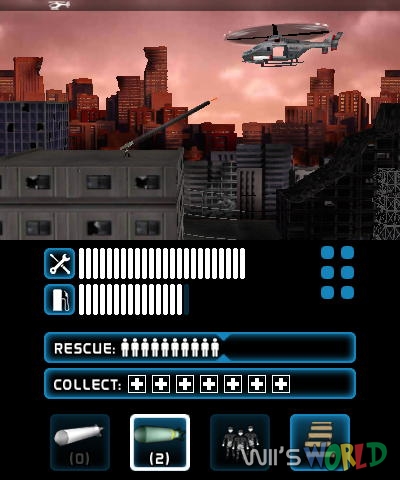 The problem is, the presentation is rather lackluster. The story is told completely through cut-scenes filled with dialogue that comes from static 2D sprites. The art style is extremely generic; I wasn't kidding when I said the game is trying to be G.I. Joe! The characters look like they were ripped straight out of a late 80s Saturday morning cartoon. The lackluster presentation also extends to the in-game graphics and overall feel of the game too. The actual levels are 3D environments, but the textures are really fuzzy and bland. There's not much variety in the levels either; you'll be flying through the typical mountain, beach, ocean, and icy zones. The 3D effect is that eye-straining "deep box" effect that some games use where the screen kind of sinks into the background.

The music is pretty forgettable as well, but the sound effects are spot on. In fact, something I appreciated was that if your chopper took critical damage, a loud warning alarm will beep repeatedly and your chopper becomes much harder to control. It's a touch of realism that adds a nice feel to your chopper.

Speaking of control, Strike Force Foxx is, again, pretty much faithful recreation of the old Choplifter games. Control is simple: move with the circle pad, fire with the A button, and rotate with the shoulder buttons. Going off the realism bit I mentioned earlier, the chopper controls with a slight nuance to realistic chopper movement, but it's nothing too extreme. It's easy to control and it works well. You can even fine tune your chopper with gyroscope control, but thankfully this can be toggled on or off. 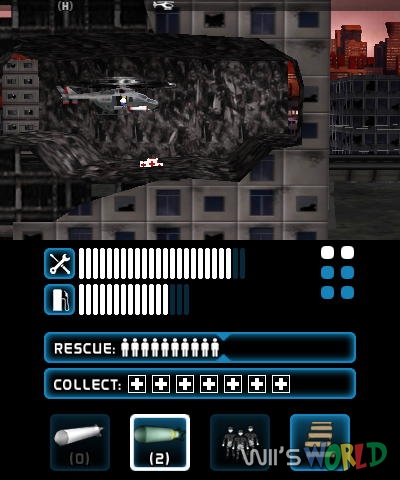 Levels will task you with a certain amount of objectives. You're going to have to either rescue civilians, destroy a certain amount of enemies or buildings, find supplies, and so forth. Basically you're going to be shooting a bunch of bad guys. It's fun in short bursts and it's very much a classic arcade kind of feel, but the game never really evolves past this basic concept. Some extras are added along the way, like buying more guns or having the option to hire mercenaries, but nothing really major ever comes to play. By the way, don't ever hire mercenaries; they are completely useless. Why would you want to stop in the middle of a firefight, land, deploy your dinky little mercenary, then fly up and destroy whatever you put him there to fight much faster than he can? There's also a little novelty feature where you can upload pictures from your 3DS camera and make them the civilians you need to rescue, but this doesn't actually change anything during the levels.

There are also some peculiar design choices. In order to unlock more upgrades, you need to ace as many levels as you can by getting all three stars on them. This means that you need to destroy a lot of enemies and save every civilian, all the while doing it in a speedy manner. Here's the first problem: your chopper can only carry a finite amount of civilians at once, so you have to periodically stop by your base to drop them off. Might I add, the civilians thank you vocally after you rescue them with oddly cheerful voices, as if they've just been casually dropped off by a taxi!

Anyways, the levels are set up so that there are a fixed amount of civilians and you only need to rescue a certain amount of them. The problem is, once you hit that minimum, the level automatically ends. What if I wanted to go save the rest of them? Because of the chopper's carrying limit and how the levels are set up, you might be forced to leave some civilians behind; it's a rather annoying design overlook. On top of that, there is an alarming huge gap between the upgrades. Getting twelve stars will unlock the first two upgrades: the firing rate and armor upgrades. Right after that, the third unlock requires a whopping 52 stars! I later found out that this was story related, because during a certain section of the game you will be locked out of upgrading completely. This goes on for several levels, and it's a bit of a downer once I realized that I wouldn't be able to upgrade anything for a while.

As mentioned before, Strike Force Foxx is a faithful nod to the old Choplifter games, but it lacks in presentation and fresh gameplay. It's great in short bursts when you just need to get a dose of that super cheesy action movie story and you just want to shoot up terrorists and blow stuff up; just don't expect anything too big here.