When Nintendo found a new level of success back in 2004/2005 with the DS, they (and the other companies who developed for it) were plunged headfirst into the emerging realm that was the casual gaming market. Despite this however, these potentially treacherous and extremely uncharted waters never phased the now 124 year old industry giant and Nintendo found a new level of acclaim simply by appealing to those who had thus far been uninterested or felt unequipped for the industry. Of course Nintendo were already experts in the handheld field. With the Gameboy brand far outselling its competition over many generations and in many iterations since handheld gaming's early days, it wasn't as if their grip on the market was lacking. However, despite this success both the Wii and the DS (in all its forms) were both able to do the impossible and get the whole family gaming together.

So the question now arises, how did they do this? Some of it was clever marketing and design but one of the main reasons was something far simpler in concept. They expanded the genres of the software to appeal to everyone. Laced within this idea was a new sub-genre of gaming that has since found a permanent home on all handheld hardware, be it console, Smartphone or even tablet. This genre can only be described as an 'evolved puzzler' and it is here that we find Tangram Style nestled comfortably. 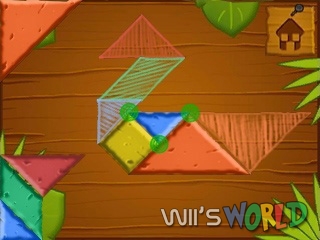 Whether it's Brain Training, Sudoku or Professor Layton, the idea of a bite-size, lateral thinking puzzler is one that sells and not just to the average gamer. So in this packed market, can this small eShop title stand out as something special? The answer is unfortunately not really, however it's not all bad news.

Before even loading up Tangram Style, many will notice the low price. At only a few dollars/pounds this is definitely a title with value, especially for those who like Tangram puzzles. That may sound obvious, however there are A LOT of Tangram puzzles here. Set across multiple game modes including Classic and Timed, this is sure to have more than a few hours of game time laced within it.

The problem here arises for those who don't like Tangram puzzles or perhaps more importantly don't know what they are. Put simply, the idea is to fit shapes into a specific order on a board. It sounds easy and dull but, much like Sudoku, there is an unseen depth that can make puzzles infuriatingly difficult. However the problem is clear here from the start, if you don't gel with this dynamic, you will hate the game as all it gives you is more, albeit with very slight alterations. 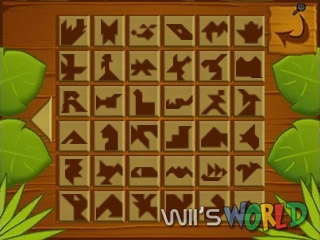 The production value here is solid, but not going to set the world on fire. Despite this the same could be said for any number of puzzle games including the likes of Brain Training. It's not about how good it looks or sounds, just how addictive it is and to the right person this could be a worthy addition to their 3DS library. However, I fear those people will be few and far between.

Tangram Style's main issue is not without a sense of irony. It boasts too much of a good thing for some, and too much of the same thing for others. With games such as Brain Training and Big Brain Academy already providing this type of content and more, coupled with their now established franchise lineage, it's hard to see how this small eShop title is going to make a splash. If you like Tangrams then by all means pick this up and you will be playing for hours, however if you are looking for something diverse you may want to look elsewhere.