Published by Ynnis, Developed by -

A mystery worth puzzling over?

The Mysterious Cities of Gold: Secret Paths is a charming adventure game based off the French-Japanese animated series from 1982. Recently, the show received a second season, and this game follows the adventures of its three protagonists.

The opening animation shows the cast in their giant mechanical Condor flying above a vibrant and misty view of China, searching for the lost city of gold. Fortunately, the game does exactly that. With its colorful cel-shaded style, the art mimics the cartoon surprisingly well. 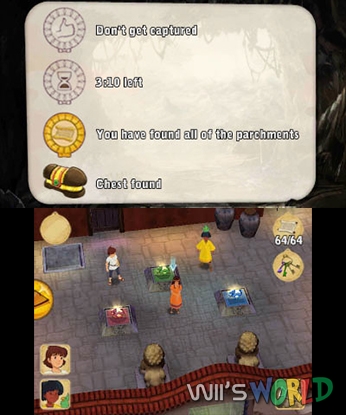 As you explore the maps, you are presented with obstacles that can be overcome by a specific skill that one of the protagonists possess. Esteban can call on the power of the sun to remotely access switches, Zia can fit through small areas the others cannot, Tao can decipher ancient Mu text for clues to puzzles, and use his pet bird Kokapetl to snag keys from guards unnoticed.

The great level design and interesting switch mechanism also introduces enemies and stealth to the gameplay. When the player enters the view of an enemy, a dotted line appears between them and it becomes a solid line the closer the two are. If the player breaks the line of sight by running away or jumping into a barrel, the guard will lose track and return to their patrol. While the penalty for being captured isn't that hindering, the player will lose time for being captured. Also, your score on each level is dependent on how few times you are captured, how many parchments you've collected, and how quickly you complete the stage within the time limit.

The stages themselves are well designed puzzles that lay out a series of even more puzzles for each hero, so it's a good idea to use the camera function to plan out your route with each character. However, you will sometimes need to plan quickly as some levels will leave you with fewer seconds to spare, leaving the player with the task of racing the clock while solving various puzzles. 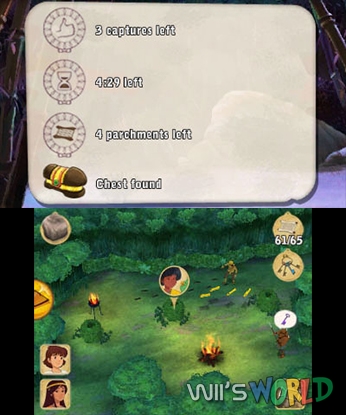 Although the levels are well thought out, the same cannot be said for the puzzles they contain. Typically you will find the same puzzles throughout the game in different combinations, making them a little repetitive and simple. Most of the challenges come from completing these puzzles in the time limit while also acquiring hidden artwork and collecting every parchment.

The overall gameplay balances risk and reward, making for a challenging and fun experience for any age.