Thorium Wars: Attack of the Skyfighter

The force is weak with this one

If Thorium Wars: Attack of the Skyfighter has one good thing going for it, it makes me nostalgic for one of my all-time favorite flight sims, the Star Wars: Rogue Squadron series on Nintendo 64 and GameCube. I would spend hours upon hours flying as Luke Skywalker or Wedge Antilles, scoring bullseyes on womp rats in my T-16, running the trenches in the Death Star, and tangling up AT-ATs with my tow cables trying to best my previous medal and completion time.

Yet while Thorium by Big John Games is clearly inspired by Rogue Squadron and games like it, it simply doesn't live up to the high standard set by its predecessors. While the game's ship control is satisfying, this game feels hastily thrown together. It offers only slight challenge, mediocre graphics, uninspired enemies, limited music tracks and sound effects, an aggravating crash mechanic, and just enough variety in its environments to be able to cobble together a trailer for the game that makes it look grander than it actually is. The last three stages did manage to pique my interest somewhat, but clocking in at just around two hours of gameplay on normal difficulty, that's unfortunately not saying very much. It's a game with promise that simply does not deliver. 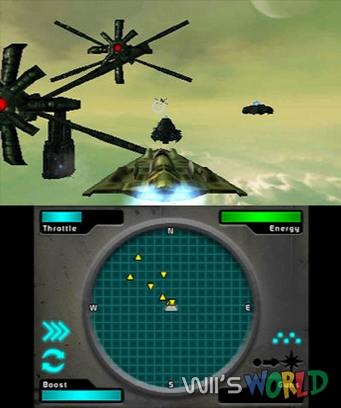 The simple premise of the game is that the Thorions, a race of war machines who had attacked humanity a generation earlier, have returned in greater numbers and are attempting to wipe out the human race. All of this is made apparent to you through bland text-based mission briefings that also give you your mission objectives. With the exception of the first mission, you have a choice of three models of ship on each mission: the Utu, the Indra, or the Shango. The Utu is your standard middle-ground fighter with medium shields, speed, and attack. The Indra features heavy shields, heavy attack but slow speed, and the Shango vice-versa.

The ship controls are fairly tight. You can speed up with the A button or slow down with the B button, and slowing down allows you to make sharper turns. The Y button lets you see threats behind or beside your craft, the X button engages a barrel roll to avoid missiles, and you fire with the right shoulder button. You can fly directly up or down, but can't execute any cool loop-de-loops to get the drop on your enemies.

The ships all fire the same way, and have two firing modes: a rapid-fire mode that is good for smaller enemies, and a linked-canon charge mode that helps you take down the heavily armored ones. Your guns will overload if fired too frequently or a charge is held too long, represented by a gun meter on the bottom screen, causing you to think about measuring your shots. Also on the bottom screen you have your radar that shows enemies and mission objectives, an energy meter that represents your health, and a boost meter that dictates your ability to barrel roll and activate speed boosts which refills over time. 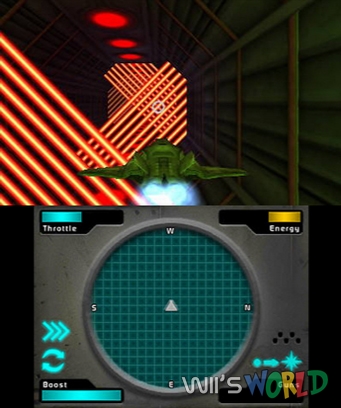 All of this feels quite natural and gives you a strong level of control that you would come to expect from a sci-fi flight sim. The flight mechanic is not without flaws, however. The ships all feel a bit slow, sadly, and even the fastest ship you can choose fails to capture any sense of true excitement as you press hard on the throttle. The biggest problem however is that any collision barring the slightest scrape will cause your ship to instantaneously explode. This may be somewhat realistic, but not a lot of fun in games where you are charging directly at enemies or flying around in close quarter hallways. The game makes up for this by providing numerous checkpoints, but it is very jarring being constantly jolted out of the flight experience (and these restarts factor into my two hour play session).

The game's eight missions are not terribly exciting or memorable, mostly involving you flying through a canyon or ice cave, seeking specific targets to blow up. The mission objectives are always made apparent to you in game by text messages that appear on the top screen giving you guidance, sometimes to the point where it feels like the game is holding your hand. Some of the missions fortunately shake up the locate and destroy formula, such as one that requires you to target weak spots on massive floating towers, or another that requires you to fly as fast as you can through a trap-laid tunnel that reminded me a lot of Star Fox, but these are few and far between.

At the completion of each mission you are given a medal, which tellingly has nothing to do with the completion time, but how few times you exploded (likely due to collision since I don't see the enemies' attacks causing many to die). It would have been nice to have optional objectives relating to killing optional enemies off the beaten track, or simply for destroying more enemies than the minimum without getting killed, but this game flounders in most aspects of gamer enthusiasm. 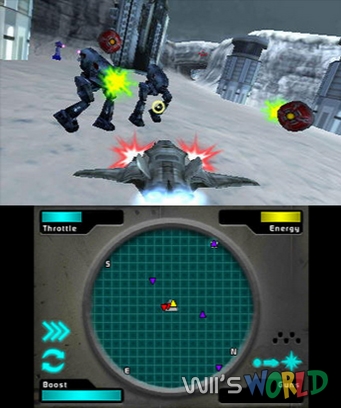 The enemies in the game feel like Star Wars rip offs: you have your TIE fighters, your AT-STs, your probe droids. They're all here! The game doesn't truly feel original in any sense. Meanwhile the actual danger posed by these baddies is limited as there are so few of them at any given time, and you never really feel like you're in any danger except of crashing into a wall.

As for the graphics, the ships you can fly are rendered well, if perhaps a little gray and bland. The environments and enemies though are poorly rendered with little detail, archaic textures and low polygon count. The explosions for you and your enemies are the same, with an opaque fiery cloud with no hint of debris. I would hardly accept that on the DS, let alone 3DS. The 3D depth-of-field effects are implemented well enough, but I found it easier to play in 2D.

Meanwhile the game has only three music tracks, which, granted, did manage to remind me somewhat of Metroid Prime, which is a big plus. You can't go wrong with the pyew-pyew sounds of laser guns and of your enemies combusting, but otherwise there's not much else here.

Amazingly, the game includes a gallery for all the ships, enemies, and music tracks in the game, as if they expected people to really care enough to learn more about them! It shows how sloppy the game is that the 'replay ending' button was available to me before I even finished the game (spoiler: it's a bunch of still shots of you escaping an explosion).

In summary, Big John Games created a product that would look really cool in a short trailer, causing poor saps that hadn't done their research to drop $7.99 on it. Sure, if the game had been ludicrously cheap like Gunman Clive for $1.99 on the Nintendo eShop (which is an excellent platformer for the price), I'd suggest those fans of Rogue Squadron to pick it up for a nostalgia trip. For 8 bucks though, I will politely nudge you towards the Level-5 Guild series games.