Published by Level 5, Developed by -

Another gem from Level-5.

Anyone who's ever played an RPG before can appreciate the humor in Weapon Shop De Omasse. Not only does it take place from the perspective of an apprentice blacksmith, named Yuhan, but the characters who come to rent weapons all offer a new look at typical RPG tropes. Grandma Snow is an axe-wielding elderly woman who defeated the Evil Lord, the game's main antagonist, 50 years earlier; Izou is a samurai who has disgraced his family through a series of injustices not entirely his own fault, resulting in him engaging in un-samurai-like work; Sir Friedel Schlintz is the son of a great warrior who doesn't quite live up to expectations. The list goes on.

NPCs are thrown in for the purpose of upgrading weapons and making cultural references (hashtags and "I ain't got no time for that" abound), and are easily distinguished from the main characters by their simplistic way of dress. RPG fans will understand the pains these NPCs go through, especially when they say things like, "I'm training to become a good damage sponge for important event battles," or, "I can't find the exit - I'm having save point anxiety." 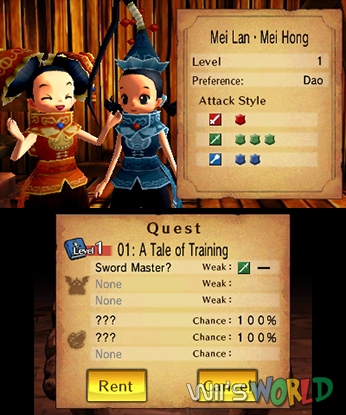 While characters and NPCs are away from the shop their events are recorded in the Grindcast, a live-feed akin to Twitter - which makes this game fairly text-heavy. If you miss some of the conversations that pop up in the Grindcast and wanted to read them, you'll be able to view them in the End of Day report that details performance ratings, such as customers and number of weapons forged, so never fear.

Nothing is spared from wit's eye in this game, and while it may not always be laugh-out-loud funny, it is clever all the way from its dialogue to its sound design. Even achieving certain feats in-game will see you presented with self-proclaimed junk to put in your shop, such as a monster pelt rug.

Most importantly, though, the sound design works toward the humor of the game. Sound effects in the Grindcast come in as retro blips, whereas the music for day-to-day lounging in the smithy or actually forging weapons is full of attitude. Given that Yuhan is commonly accused of lounging about and not doing work, it's amusing to think that when he does forge weapons he's doing it to a high paced, energetic tune or a more subtle, sultry theme. 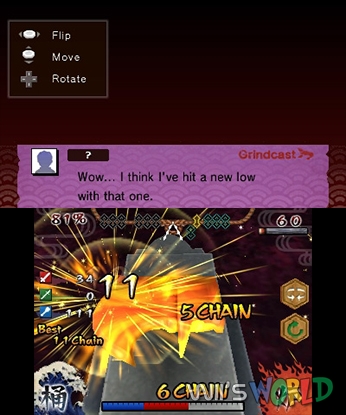 The touch screen is used well for the forging, which is the main highlight of the game with over 80 weapons to shape and maintain. Depending on how well you do and what materials you use, the weapon will gain slash, pierce, and blunt powers, as well as a dull, edged, or sharp blade. Weapons are rented out to NPCs and characters based on preference and skill level, with the end-goal being the defeat of the Evil Lord once he sees fit to reveal himself.

Another aspect to forging is the maintenance of weapons. Anybody who has played a recent Pokemon game and spent time cleaning gym badges will be able to understand the compulsion inherent in polishing weapons, but unlike the badges, continual maintenance of the weapons actually translates into the battlefield. Every time a weapon is returned it increases in experience. But if a character or NPC is defeated, that weapon is lost and will need to be replaced.

Players may not feel the need to replay Weapon Shop De Omasse once they've finished it, but it is a fantastic little gem that should be experienced at least once, especially if RPGs are your fancy. It may get bothersome to keep sending away customers when they don't give enough time for you to make their weapons before they come calling, or it may be repetitive to forge weapons to the same tunes or even polish them, but these grievances can all be overcome. Enough entertainment can be had from the Grindcast to keep things interesting if you've had enough weapons forging for a time, but if even that gets stale you have the option of fast-forwarding through the day so that the story itself can keep progressing and new weapons become available.