Published by Activision, Developed by -

With tons of different Lalaloopsy friends and pets to find throughout the carnival, this is one adventure you won't want to miss!

Lalaloopsy: Carnival of Friends has no review on Wii's World. Write a review 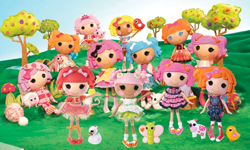 Lalaloopsy for 3DS and DS
Activision has announced a game called Lalaloopsy: Carnival of Friends for Nintendo 3DS and DS. I don't exactly know what this is, whether...