Published by D3, Developed by WayForward

A short tour through the Land of Ooo

Adventure Time: Hey Ice King! Why'd You Steal Our Garbage?! is a retro platformer/brawler for Nintendo 3DS and DS based on the popular Cartoon Network show Adventure Time. This quirky little title takes all the charm from the cartoon and combines it with retro side scrolling and dungeon exploration.

Throughout the game players take control of Finn the human boy and Jake the dog as they quest across the post-apocalyptic land of Ooo in order to track down their stolen garbage which was taken by the evil dork Ice King for reasons unknown. 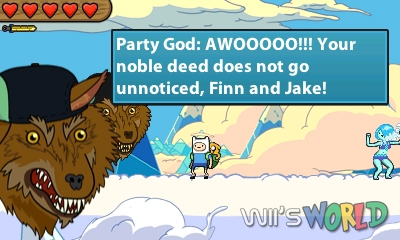 Gameplay is very straightforward, players travel from stage to stage via a top down overworld filled with towns, dungeons and randomly appearing baddies. Heading into any location will place our heroes in the real meat and potatoes of the game, side scrolling areas filled with enemies and simple platforming challenges or town hubs filled with the strange but helpful residents of Ooo.

When it comes to exploration it is important to check every area and speak to every character in order to get every bit of information that is available in order to advance in the story.

That sounds repetitive, and it is to a point, but thankfully all of the funny and strong personalities from the Adventure Time show are all intact in the game. Although the vocal offerings are disappointingly limited, the game's dialogue is so finely tuned for each and every character's unique personality every line fits perfectly with whomever you end up running into, whether it be Ice King, Treetrunks, or Lumpy Space Princess. 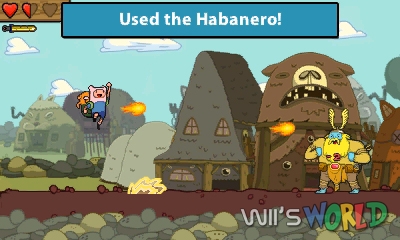 The bottom screen incorporates several different displays such as a map and an inventory system. As players defeat monsters and open treasure chests, loot drops in the form of food, condiments and magical items. Food of course heals all young adventurers and condiments put a little flair into each bite by adding extra health. Magical items offer short term boosts to stats or movement allowing you to jump higher or attack faster.

As far as combat goes, Finn mainly attacks with Scarlett his golden adventure sword which offers swift and mid-ranged blows. Lose enough health and Finn is left with only his fists to defend himself. Jake is able to stretch his body into several different forms and has an upgradeable list of attacks. Jake also learns several helpful moves that make getting around Ooo easier. As you explore the Ooo and clear dungeons Finn is also able to grow and boost his stats with a very simple upgrade system.

The game's graphics are simple and cartoony to match the show it is based on. Everything is hand drawn and since this offering is for both 3DS and DS, there really isn't much added by the 3D effect. The soundtrack really shines with several really fast paced and catchy songs that are all part of Adventure Time's retro presentation. Everything looks and sounds nice and it is very reminiscent of Zelda 2.

Adventure Time: Hey Ice King! Why'd You Steal Our Garbage?! is admittedly a short-lived experience, and isn't especially challenging or groundbreaking. If you are a fan of the show this is a great little companion for the cartoon but won't last through a marathon of the first season. What we get is an Adventure Time video game that is fun, full of faux nostalgia and true to the franchise, but maybe this quest could have been more epic.