Have it your way.

The Final Fantasy franchise has diminished in recent years. Once a legendary game series, Final Fantasy has largely failed to keep up with both modern trends and timeless gameplay. Though it is hard to argue when exactly the series started its decline, many gamers have wished for a return to the glory days of the franchise. Bravely Default: Flying Fairy can be considered a return to the early days of Final Fantasy, it takes the best parts of classic JRPGs and modern game design, proving that this genre can still be relevant after so long.

Stop me if you've heard this: Four crystals have gone dormant and the world is in dire straits. Four warriors of light are gathered to bring peace back to the world while a group of villains seeks to oppose them and use the crystals for their own purposes. No, the overall story of Bravely Default is not very original, but the developers wisely do not focus on the base narrative. Instead, most of the story focus is on the game's characters, both heroes and villains. Though the main characters are also very overused (amnesiac, hero from a destroyed town, tomboy, etc.), most conversations involve how the characters interact with each other. They might talk about food, clothing, or gossip with each other and this helps make the four much more endearing than the typical JRPG protagonists. There is also a surprising twist that occurs about halfway through the game. Though some may be able to see this twist coming, it effectively gives dimensions and motivations that other JRPG characters would lack. 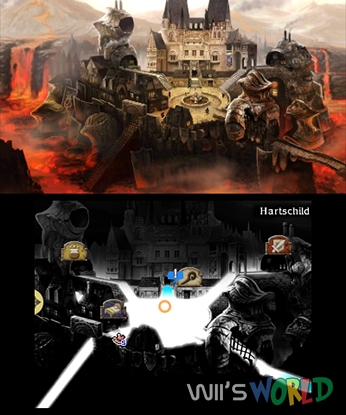 Bravely Default's gameplay is likewise not totally innovative. Characters go from locations across a world map to other locations. They fight random battles, gain levels and engage in the occasional side quest. They go into dungeons, fight bosses and repeat until the end. However, it turns out that just a few tweaks of this formula can make a typical game feel anything but.

First, the Brave and Default system changes things up in combat. In general, combat is a typical turn-based system with buffs, status ailments and more than a bit of grinding. However, if a player chooses to Default, they effectively skip a turn. Normally in a JRPG this would only defend a character, but in Bravely Default it gives players an extra turn. Likewise, if a character chooses to Brave, they can perform more than one action. Brave too many times however, and characters may lose a turn or three. While initially this would not seem like a big difference to combat, the system adds a surprising amount of strategy.

Returning from classic Final Fantasy is the Job system. Over time player characters gain new 'asterisks' which equate to jobs. These jobs give players not only different abilities, but also affect how good they are with certain weapons and change character statistics. Interestingly, players in Bravely Default can equip a second job along with passive job abilities for characters that can be used for almost any situation. Players familiar with the job system will likely recognize the Black Mage, Knight, Thief and other classes alongside more exotic jobs such as the Performer and Vampire. Ultimately the job system not only gives players a variety of custom options for developing characters, but will likely add hours for those who wish to fully develop every job. 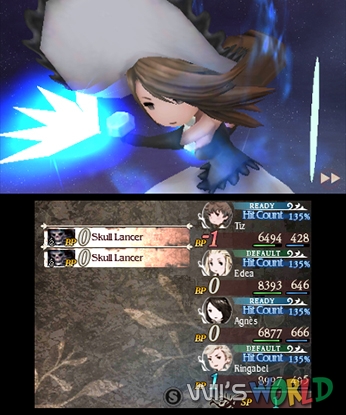 What helps Bravely Default stand out the most from contemporaries is a large focus on customization. Players might think that simply being able to decrease or increase battle speed would not significantly change a game, but being able to do so makes Bravely Default drastically different from a typical JRPG. Players can also change enemy encounter rates from none to twice as many, change difficulty at any time and even play the game completely left handed. Again, these seem like only bells and whistles, but it is amazing that a game's feel can change so much with such little changes.

Truthfully, Bravely Default is not a graphics powerhouse, even for the 3DS. The game definitely resembles a Final Fantasy from the PlayStation era, with pre-rendered backgrounds and characters resembling the chibi sprites from SNES days. The 3D effect is nice, but significantly lowers the frame rate. The game's world is bright and colorful with nice designs, the only downside being the repetitive crystal temples.

Bravely Default excels in its sound. The orchestrated music is incredibly catchy, and fits for nearly every occasion it is used in. Sounds are good, but there is not much noteworthy about them. English voice acting is decent, but not great. Thankfully though, the game is nice enough to include the entire Japanese vocal track. 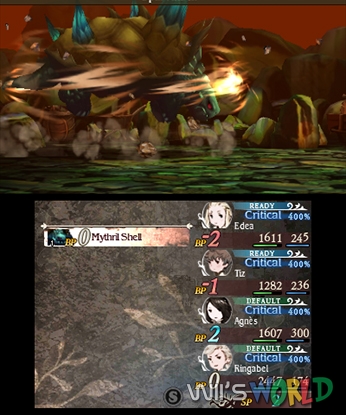 Bravely Default is a very lengthy game, and should last many players at least 45 to 50 hours. This is not including the wide variety of side quests, developing jobs to their maximum level, achieving both endings, finishing on multiple difficulties and even a New Game + mode. Bravely Default is definitely a great value for the price, and will likely stay in players' 3DS' for months.

While there is more that could be said about Bravely Default, the game's developers should be commended for putting a little more life into a stagnating genre. The JRPG has largely been a rigid category, and the amount of customization that Bravely Default offers highlights the genre's best aspects while mitigating the worst. If you have ever enjoyed a JRPG and don't mind a game that is more substance than style, Bravely Default: Flying Fairy is definitely one to check out.