These boobs came with a fighting game

Let's not try and sugarcoat it; DOA is the fighting game series equivalent of Baywatch. For those of you who have never played a modern Dead or Alive title, consider yourselves-for the most part-lucky. When you make an anti-feminist such as yours truly flat-out appalled by some of the objectification titles under your franchise's banner have perpetually endorsed (COUGH COUGH Xtreme 2), you have gone too damn far. This is the mindset I entered Dead or Alive: Dimensions with, and while I still have issues with the largely-annoying & one-dimensional women, and to a lesser extent their over-sexualized designs, I've started to see that this series, or at least this game, may be a lot prettier on the inside than shallow exterior would like you to believe.

First off, let's address what we all knew was going to be bad about this game; the plot. It's nonsensical, fragmented, confusing, the characters mean nothing to you as a player, and it serves only as a means of progression for unlocking characters. So, in essence, it's just like every other fighting game made pre-MK9, and even that one wasn't much better in terms of story. Judging a fighter by the quality of its story is like judging a painting on how far it flies; it's useless and at the end of the day you just wasted what could have been a masterpiece. 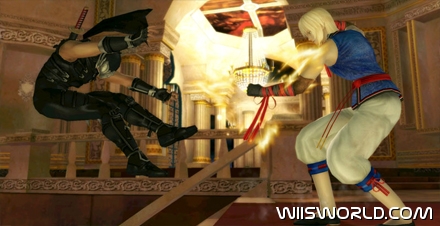 So, a fighting-game virgin may ask, what exactly does matter in a fighting game? Like Kung-Fu films and anything with Jean-Claude Van Damme in it, what really matters is the fighting system itself, and DOA: Dimensions carries one of the best I've ever seen. It is comparable to Tekken in terms of its myriad combos per character and differing styles of play, and operates on a simple yet dynamic idea of rock-paper-scissors combat. There are three types of moves in DOA: Dimensions besides guarding: strikes, grapples, and holds. Strikes counter grapples, grapples counter guarding/holds, and holds counter strikes. Sounds simple, right? Think again. For a hold to work properly, it must be used in the same direction as the opponent's strike, which can come in the form of high, middle, and low blows. These attacks can simply be guarded against, but the player is then left open to grapple moves or an unforeseen strike at an unprotected direction. If the hold is done correctly, it deals significant damage as well as breaks the opponents guard. This mechanic alone eliminates some of the most-prevalent problems plaguing modern fighting games; it discourages button-mashing, creates another risk/reward system to factor in during fights, and encourages practice and learning multiple move-sets, which means players will have to experiment with other fighters rather than overusing and getting bored of the same one.

And speaking of the fighters, DOA:D boasts an impressive roster of 25 characters, each with differing fighting styles from around the globe as well as unique and expansive arsenals of techniques. Seeing how the strikers have just as many grappling moves as grapplers, and the grapplers have as many strikes and combos as the strikers, each player is encouraged to develop their own style of play, meaning no two characters will ever play exactly alike.

The fight locations also help add to the pandemonium of the fights; like the Dragon Ball Z game series, each one is different than the last and can shift at the turn of a dime. The players can start on a bridge until one is knocked into the ravine below, and the fight continues from there. Should a player be knocked off of the game's special Metroid-themed map, Ridley will stop fighting Samus and grind the unlucky player across the brick walls before throwing them back in. This both add to the strategy and fury of even casual versus fights, setting it apart from maps in games like Street Fighter IV, where the only thing that really changes is the background. Also, the backgrounds, like the characters, boast some of the best graphics I've seen on the 3DS to this day. 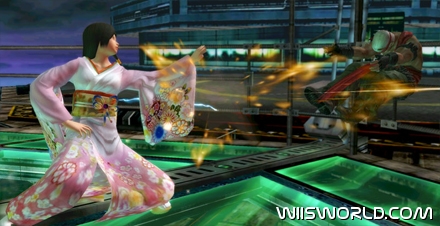 The game also has collectible figurines that can either be won or bought with play coins. They don't really do much, but in true, creepy DOA style they can be photographed and come in multiple poses and costumes. It's an odd little addition, but nonetheless it acts as a creative substitute for an achievement system, seeing how the 3DS currently has none.

All in all, this game surprised me, and to this day it is still my go-to fighter on the 3DS and one of my favorite fighting games in general. If you can get past the immature exterior and obvious pandering, you'll find a game well worth your time and money. I urge you to play it if you get the chance.