The console experience is now in the palm of your hand with rich new features that utilize the capabilities of the Nintendo 3DS to its fullest.

New to the franchise are the figurine mode, which utilizes the Street Pass feature to add a collectible meta-game, and the 3D over-the-shoulder camera option that takes fighting to new depths. For those new to the franchise, a simple mode has been added allowing players to pull off challenging moves with a single touch of the screen.

Of all the developers bringing software to the 3DS lineup, perhaps the one which has done the best job is Capcom. Ironically, they chose not to try the arduous task of trying to make a brand new game in time for the 3DS launch, instead simply porting a popular and existing...read full review 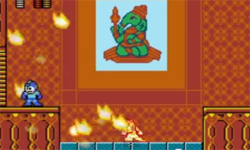 Street Fighter X Mega Man free game
Both Mega Man and the Street Fighter franchise are celebrating 25 years in the business. To mark the occasion, publishers Capcom are...