Published by Nintendo, Developed by Intelligent

Another solid reason to own a 3DS.

The Fire Emblem series has never reached the same popularity in the west as many of Nintendo's other franchises. This might be because the first installment that Americans and Europeans got of the series was actually the seventh game, or because strategy titles are not as accessible as the simpler action of most of Nintendo's other characters. Regardless, Nintendo seems determined to give the series another try with Fire Emblem: Awakening and while there has been little advertising, the game's quality alone seems to be attracting new and old FE fans alike. There are a few minor things that might not be to the player's liking, but for the most part FE: Awakening is the best entry in the series.

The overall story in Awakening is truthfully not that great. The player takes on the role of an amnesiac tactician who joins up with the elite Ylessian guard known as the Shepherds. The Shepherds are headed by Prince Chrom, brother to a religious leader and descendant of Marth. Yes, THAT Marth from Super Smash Bros. and the first Fire Emblem hero. What proceeds is a pretty standard story of war distracting from a supernatural enemy that has been used in many JRPG stories to date. Though there are occasional points of interest, they stop before anything too interesting or new can occur. Thankfully, the characters of the player's band make up for the story. Minor conversations help flesh out the characters and their relationships with each other between battles, and depending on who the player has interact, can even give various benefits in battle. To Awakening's credit, there are more than a few characters who break the mold of anime cliches, even if a few persist. 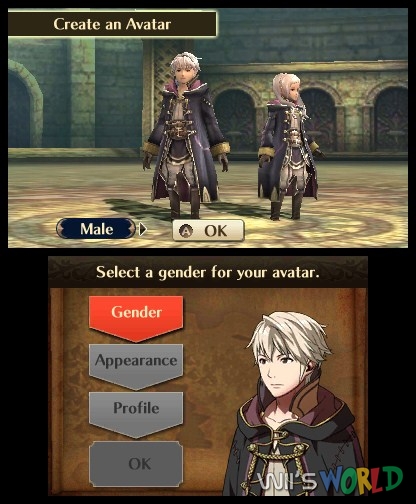 As always, the bulk of Awakening lies in the gameplay. Like other games in the series, Awakening is a turn-based strategy RPG in which only a limited number of troops can be used on both sides, with strengths and weaknesses for every unit used. In a way it can be considered similar to chess, but slightly more complicated and simple at the same time. One has to factor in how far a unit can move, what kind of attack is being used, if a unit can attack from a distance and even how different weapons work against each other. Likewise, there are aspects to different terrains on the map and how strong your characters are at the time.

Awakening doesn't change the fundamental Fire Emblem gameplay, but there are a lot of minor changes, with a few major ones too. There are two major changes, the first of which being the new Casual mode. In every prior Fire Emblem title, the games were considered incredibly difficult not just due to strategy, but because losing a soldier in battle meant they died permanently. The casual mode alleviates this problem by allowing players to keep soldiers even if they are defeated in battle; Hardcore fans have the option of playing the game in 'classic' mode which eliminates this option. This reviewer personally found the game much easier to manage with Casual mode and enjoyed the game more because of it.

The other major change has to do with the aforementioned character interactions. Rather than just extra cut-scenes though, units in battle can in fact team up to give each other support. This can result in an extra attack in combat, relationships improving, a stat adjustment and even the potential to be saved from defeat. However, players also need to consider the penalties of this, namely that the teamed up units have less movement ability and only one attack for the two paired up. Units can also benefit each other from simply being stood on adjacent tiles, but the benefits aren't the same as a true pairing up. It adds a great layer of strategy to the series, one of which hopefully remains in future installments. 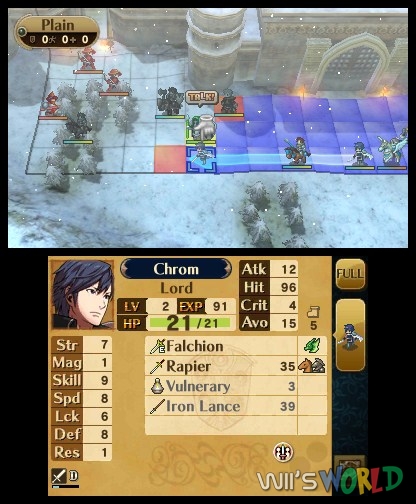 Most of the changes implemented in Awakening are minor. For example, one change allows players to see the range of potential movement and attacks for every enemy nearby. Another is the far better user interface and tutorials. How to do things and why they are done is far better explained than it was in previous titles and it shows. Then added are the sparkling tiles on the map which can give players experience, items, weapon proficiency or even a better relationship with a partner! The new second seal items allow for not just improvement, but whole changes to character classes. Leveling up for different characters is easier and doesn't just rely on main and side story missions. There are tons of little changes like this that add up to a better experience overall, and the game is much better than its predecessors for it.

In terms of graphics though, Awakening largely feels like it could have been done as a DS title. Battle positions, animated cut scenes and menus all are in the series' standard 2D. The only exception to this are the animated battle sequences between units which look great. However, these sequences grow repetitive and less appealing as time goes on. The in-game cut-scenes use this same style and aside from some odd looking boots also look great.

Aside from a new instrumental version of the classic Fire Emblem theme, Awakening features a large variety of music. It is not the kind which repetitively stays in your head like other game music, but it doesn't need to and has a sweeping, epic fantasy sound like Game of Thrones. Voice acting in the game is hard to comment on, as there really isn't much of it. What there is is actually quite good, and Nintendo was nice enough to include both English and Japanese tracks for those who want it. Like the other aspects of the game, there was clearly a lot of attention put into the sound. 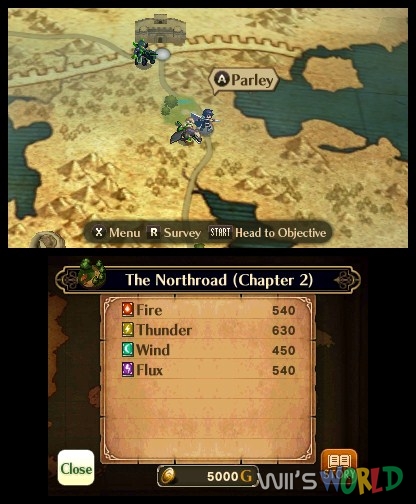 Even if the player is only trying to finish the main story, Fire Emblem: Awakening will likely last at least twenty hours, if not more. There is however an amazing amount of extra material. In addition to the main story missions, there are also up to twenty 'paralogues', side missions which flesh out the story and introduce new characters, some of which are more difficult than those in the main game. In addition, there are a lot of 3DS wireless features. StreetPass allows players to have their teams exchanged for recruitment, competitive and cooperative play in the game's Double Duel mode. SpotPass currently brings new missions, maps, characters and items thanks to the special Bonus Box. Classic Fire Emblem characters can be fought and recruited using the 'Outrealm' feature and can give your team an edge. Still ongoing DLC gives new Xenologues which are full fledged missions similar to the Paralogues. Even an optional love tester to test compatibility between your characters is included! If players choose to take advantage of it, Fire Emblem: Awakening has the potential to last for months and Intelligent Systems should be commended for providing so much content.

This reviewer wasn't always a Fire Emblem fan. After trying the first installment on Game Boy Advance, it turned him off. However, after giving Fire Emblem: Awakening a chance, this reviewer is now a FE convert. The game is that good. Even if players are not generally fans of strategy games, they should still give Fire Emblem: Awakening a chance. It is not only one of Nintendo's best games in years, it is the best installment in the series, period.