Can this series rebirth surpass the original?

Kid Icarus could be considered one of Nintendo's most neglected franchises, having gone without a game in 21 years. Though there had been rumors of a revival on Wii and even Gamecube, nothing was definite until about two years ago, when Masuhiro Sakurai showed the project he had been working on since Smash Bros. Brawl. Though initially it seemed as if the game would be nothing more than an on-rails shooter like the Star Fox series, the truth is that Kid Icarus: Uprising is both completely different and very much the same as its 8-bit forebears.

As if to make up for 21 years of neglect, Uprising not only gives the Kid Icarus world a new story, but an amazing amount of subtext and depth. Though initially Uprising feels like a retread of the story told in the original Kid Icarus on NES, a slight twist less than halfway through the game reveals the beginnings of quite a few different stories. Though there is a central story running through the game, many different characters and settings are introduced that are brand new to the Nintendo universe. Though at times the characters can seem a little corny, the whole game not only feels charming and uplifting, but is also feels like one of the most fresh and interesting settings that Nintendo has done in almost a decade. 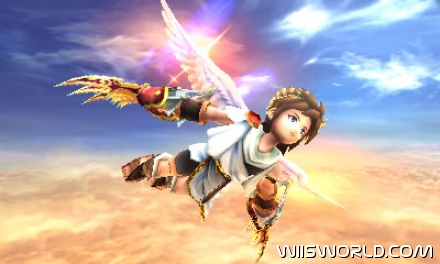 The gameplay of Uprising is a curious mix of different genres, yet creates something that not only feels unique but also is almost perfect for portable play. Levels are divided into three sections. The first is an on-rails shooting section similar to the Star Fox series, in which Pit has the power to fly for five minutes or else his wings will burn up like the original Icarus. Land battles and bosses make up the second and third parts of each level, and can best be described as part third-person shooter, part 3D Smash Bros. Aiming and shooting is similar to the on-rails sections, but the methods of moving, dodging and melee attacks are almost identical to the series that made Sakurai famous with gamers. Some however, may be put off by the control settings; as most 3DS systems do not have the Circle Pad Pro, Nintendo was forced to work without a second analog stick for the game's camera. Depending on where players are, this can either be decent or infuriating; with the default control scheme, players move Pit with the control stick and move the camera and aim Pit's weapon with the stylus. This isn't terrible in and of itself, but it leads often to hand cramping and moving the reticle instead of the camera and vice-versa. Thankfully there is an alternate control scheme, but even then it still takes some getting used to and isn't as responsive as the stylus. The control scheme does have its issues, but it isn't as terrible as many reviews have claimed it to be, it just takes some time to get used to. The hand cramping actually leads the game to be played in short sessions, which makes sense considering that it's a portable title. This was likely unintentional, but it works well for the game's design.

Uprising mixes both a lot of the original Kid Icarus' ideas and more modern elements to a surprisingly good mix. In the original game, players were rewarded if they took risks and fought as many enemies as possible; not only would Pit be granted a chance to gain a larger life bar, but the hearts granted upon defeating enemies would work as currency and training rooms would reward Pit with better equipment. Sakurai and his team have not only reworked these elements into Uprising, they have also come up with a terrific new way of adjusting a game's difficulty. Uprising uses what is called the Doom Cauldron before each level, in which players can give or take a certain amount of the game's heart currency and adjust the stage's difficulty or 'intensity'. This is not as simple as an 'easy', 'medium', 'hard', difficulty, and is adjusted from an intensity of 0 to 9 in .1 increments. Likewise, the difficulty itself isn't simply increased by enemy health or numbers, with enemies gaining new attacks, becoming faster, or even giving the stage new enemies, hazards and areas. This system is similar to gambling, as while the difficulty increases, players who manage to brave these trials are rewarded with better items and more hearts. Many of Uprising's enemies, bosses, items and other elements are taken from the original Kid Icarus, but don't detract from the 3DS game. Team Sora should be respected for handling this so well, especially considering so few revived game franchises handle such elements so gracefully. Unlike the original game, Pit can buy and find numerous different weapons and powers. In addition to Pit's trademark bow and the sword he gained in Brawl, ten other weapon types can be used, from giant cannons to clubs to guns and they all have a unique feel. There are many different kinds of these weapons, and fusing weapons will give players stronger versions to use. Powers can be activated on the touch screen and can give temporary effects to players. Some are fun but useless like fireworks that can be set off, while others can add poison and confusion effects, enable faster charge shots and even bring one back from the brink of death. All of these elements give Uprising a surprising amount of depth, and give credence to Sakurai's claims that Uprising was made especially for core gamers.

Kid Icarus: Uprising is probably the 3DS' current best looking game and in fact easily bests most Wii games. The frame rate is largely very smooth, there are terrific lighting effects and the array of different colored and unique environments is staggering. In one level players might go through a tribute to the original Star Fox on SNES, and in another travel through the stars. The 3D effect is used especially well, and amazingly does not seem to share much of the same blur effects that happen to the 3DS with other titles. Uprising is a technical showpiece for the system and pushes the 3DS to new heights.

Uprising's music and sound are also exceptional and a mix of the old and new. The music is almost entirely orchestral, and sounds amazing. Not only are there remixed versions of themes from the original NES title, but some great original music as well. There are certain times NES bit tunes are used in their entirety, and this creates an interesting musical dynamic which for the most part works well. It is also great to say that Nintendo of America seems to finally have realized that voice work should be done by professionals, and Uprising's cast is probably the best to date in a Nintendo title, which is good because the cast has a lot to say during gameplay. Our hero Pit is played by relative newcomer Anthony Del Rio, whose game experience has been mostly only been in Metal Gear Solid: Peace Walker. Del Rio does a great job of voicing Pit, coming across equally as plucky, heartfelt and somewhat nerdy at the same time. Even better is Ali Hillis (Mass Effect, Final Fantasy XIII) as the Goddess Palutena, managing to bring to life a character that is both a harsh and caring mentor to Pit. Of special mention is Hynden Walch as new character Viridi, goddess of nature, who despite hating humans is more like them than she is willing to admit. Couple these three with the likes of Fred Tatiscore, Nikita Futterman, Cree Summer, Troy Baker and Scott Bullock, and players finally have voice work to be proud of in a Nintendo game. 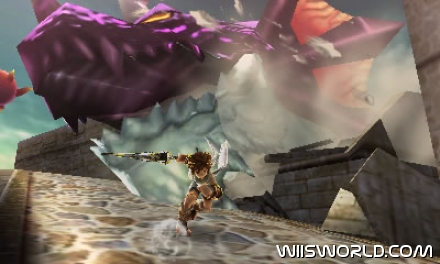 Much like Super Smash Bros. Brawl, Kid Icarus: Uprising is filled with replay value. In addition to the aforementioned difficulty system which gives incentives for replaying levels, an achievement system of sorts is used. After accomplishing certain tasks, three pictures gradually fill up and grant rewards to the player. These can range from setting off fireworks in a level to finishing every level on the highest intensity and will likely take quite a bit of time to accomplish. In addition, players can gain 'idols' either by accomplishing different objectives, finding them in treasure boxes or using 3DS play coins to pay for them. The idols are almost exactly like the trophies found in Smash Bros and add even more replay value.

Finally, Uprising contains a multiplayer mode that allows either local or worldwide multiplayer and it performs very well. Multiplayer is nearly identical to the land battles in the single player mode, and involves teams of three fighting against each other, though a few different twists have been added to what would be just an average team deathmatch mode. All three players share a life bar and are allowed weapons found in the single player mode, which encourages a heavy emphasis on teamwork. Normally, all three players are angels/soldiers on the side of Palutena or Medusa, but when the lifebar nears zero, the team is granted either Pit or his dark counterpart. Truthfully, the multiplayer isn't amazing, but it can be very fun.

Despite all odds to the contrary, Kid Icarus: Uprising has turned out to be a true 'coming out' party for Pit. Though some players may be turned off by certain control issues, Pit's rebirth has so much care and love put into it that it even puts some of Nintendo's efforts with Mario, Link and Kirby to shame and Uprising deserves at least a rental from any curious player. Welcome back Pit, you've definitely come back in style.

Thank you for the well-written, comprehensive review. Let's hope the Wii U version is equally impressive.

I agree with your review. Uprising is an excellent game, easily my favorite on the 3DS.