In this game, it's a good thing to suck

Kirby's Return to Dream Land was a decent Wii title, but seemed to be designed largely for the family demographic that had made New Super Mario Bros Wii popular. With Kirby: Triple Deluxe, the series has gone back to its portable and single player roots. With a few new tweaks to the formula, Triple Deluxe is one of the better Kirby games in recent memory.

As usual, the story is fairly simple. A giant 'Dreamstalk' uproots both Kirby and King Dedede. A villain seeking Dream Land's greatest hero mistakes Dedede for this hero, and Kirby follows in hot pursuit. 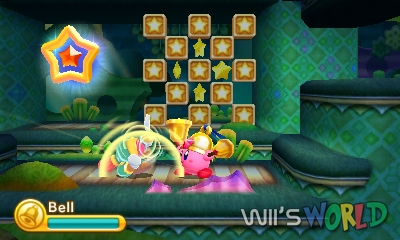 If players have tried a 2D Kirby title before, they should know what to expect. On his own, Kirby can inhale enemies and blocks, fly by making himself lighter than air, slide and ingest enemies to copy their abilities. Alongside familiar Kirby powers like the bomb and wheel, Triple Deluxe features the new Archer and Bell powers. Nothing about the core gameplay has changed, but there are some slight differences.

Every few levels or so, Kirby is given a 'miracle fruit' ability called Hyper Nova. This greatly enhances Kirby's ability to inhale things. Initially, this is just a fun novelty. Kirby can inhale giant worms, trains, and boulders just to name a few. However, Nintendo wisely expanded this mechanic to include variations on boss fights and puzzles. Also, the Hyper Nova segments are well spaced out between the other stages, giving a good balance between the old and new.

Triple Deluxe's developers have also refined the gameplay, even if they have not actually changed much. Triple Deluxe uses the system's 3D mechanic for frequent puzzles, enemies and obstacles in the fore and backgrounds, making the 3D effect almost essential for playing. Bosses are surprisingly difficult, and Kirby is tasked with obtaining a number of Sun Stone items which will open up world bosses or extra stages. Triple Deluxe also features one of the only instances in which the 3DS gyroscopic controls are not a hindrance during gameplay, and are used in a select few but fun segments. 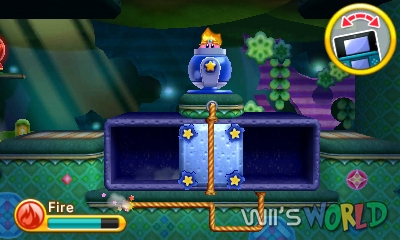 The graphics are not significantly different from Wii's Return to Dream Land, but have much greater variety and color. Kirby goes through twilight caverns, sandy pyramids and moonlit mountains just to name a few. As mentioned earlier, the 3D effects are very well done and virtually essential to gameplay. There is little to no slowdown and animations are crisp and clean. The only minor blemish are the cut-scenes, which like many 3DS titles use video codecs instead of the in-game engine. There are not many of these though, so there's not much room to complain.

The soundtrack is a nice blend of great new remixes of classic Kirby songs and new music as well. The new songs are not always great, but there are no real 'duds' in the bunch. The sound effects used are largely classic Kirby, and they fit the game's tone.

Triple Deluxe is a far 'meatier' Kirby game than the overpriced Return to Dream Land. The game's six worlds all feature extra stages to complete once every Sun Stone in a world is found, and some can be surprisingly hard to obtain. The extra stages themselves are fairly tough, and the overall game will probably last about ten hours. Once finished, players have the option of trying a harder 'mirror' mode with the twist of playing King Dedede. A Smash Bros. inspired 'Kirby Fighter' mode along with a Dedede rhythm game are also included, as well as the return of The Arena and The True Arena challenges from previous titles. Finally, there are up to 200 Keychain collectibles depicting scenes from Kirby's long game history, similar to the Smash Bros. trophies. Needless to say, Triple Deluxe has a bit more content than Return to Dreamland and at the much more agreeable price of 35 dollars.

Kirby: Triple Deluxe feels like a true return to form for Nintendo's pink puffball. With the focus on single player as opposed to a shoehorned multiplayer mode, the developers were free to tighten and refine what made Kirby great, as well as add a few new ideas. Kirby seems to be at his best on portables, so hopefully he'll be returning to the 3DS before too long.