The Force is 'meh' with this one.

The Lego Star Wars series was initially a dark horse from Traveler's Tales, most known amongst gamers for inferior Sonic games like Sonic R and Sonic 3D Blast. Now however, the Lego series has ballooned into a family franchise and enjoys enormous popularity, with at least two entries a year. Now Traveler's Tales has returned to the franchise that helped make their Lego games famous, yet the Star Wars: Clone Wars cartoon is not as famous or as well known as the movies it is based on, and in some ways the Lego franchise feels like it is running out of steam. The good news is that Lego Star Wars III: The Clone Wars for 3DS is almost exactly like its console brethren. The bad news is that it is almost exactly like those same console versions.

As said before, Lego Star Wars III is not based on the incredibly famous Star Wars movies, but instead the fairly recent Clone Wars cartoons. The series is either a love or hate affair, with episodes varying wildly in quality with the case seeming to be that the first episodes of the season are lackluster while the later half are quite good depending on the writers. The 'story' for Lego Star Wars III bases itself on numerous episodes from the show, with each level being divided into acts to account for multi-episode story arcs. Thankfully, the game does not focus exclusively on the show's main characters, namely Anakin Skywalker, Obi-Wan Kenobi, Ashoka Tano and Padme Amidala and uses episodes with not so famous characters like Master Plo Koon, Captain Rex and Commander Cody of the Clone Army. Unfortunately, there are two problems with this approach. The first is that while TT have included some of the best series episodes in the game, others like the lackluster 'Duel of the Droids' are included because they are more action-based than others. The other is that the simplistic actions and Lego grunts unfortunately don't convey the stories within very well, and often leave out huge chunks of these episodes for level design. 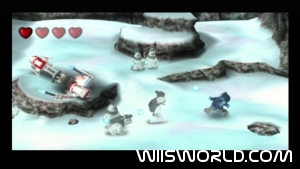 With the exception of the 3D, the graphics are essentially the same as those in earlier Lego Star Wars titles. If players are fans of this series, it likely won't matter to them, but it is fairly disappointing that after about five years there still isn't much of an improvement. There is a consistent problem with the frame rate when only about four enemies or more are attacking, and it can get irritating when in the middle of combat. The 3D effects are largely just for show, but they do add to the game's fun and can occasionally be helpful in gameplay when one is trying to figure out proper angling for jumps or avoiding blaster fire. Largely however, the 3D isn't that important, even if it is cool looking. Finally, it is disappointing that the game's cut-scenes are not done in real-time like in previous Lego entries; instead, the 3DS version employs a video codec to show cut-scenes in a distinct and grainy aesthetic which is somewhat jarring to veterans of the series.

The gameplay is simplistic and again, pretty much the same as the earlier Lego titles. Players go from room to room killing waves of incredibly easy enemies and piecing together loose bricks to make power-up pads or items. There are different characters with different abilities and each is essential to finishing a level. This happens in every level for thirteen levels and it gets very repetitive and dull very quickly. Hidden items like minikits are spread throughout the level and players can collect studs for a high level completion rate and currency for game extras. Only after gaining access to the level in free play mode and gaining enough extra characters will the player be able to totally finish certain levels however. Unfortunately, one of the Lego series hallmarks is absent in the 3DS version, namely co-op play. It is likely that this will have many angry parents and kids returning the game to stores in favor of a different version.

The sound is a mixed bag. The music is rather good and employs tracks from both the movies and animated series, impressively using fully orchestrated music. The sound effects are largely good as well, with the possible exception of one (when players step onto a pad for using the grappling hook) which sounds like a parasitic snake trying to gnaw out one's eardrums. In these sections it is best to turn the volume off. There is no voice acting, only small Lego-esque grunts so there's nothing to say regarding that. 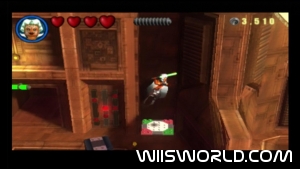 The game is fairly lengthy for a 3DS launch title, but it is likely that players will feel that it has overstayed its welcome before the end credits. Players can create their own Lego characters, go back and look for more collectibles and get additional characters, but this all just seems like artificial replay value. Once players finish the game, there really isn't much incentive to go back again, especially with the lack of a two player mode.

Lego Star Wars III: The Clone Wars is a competently made game, it just isn't very fun or engaging. For a launch title, it's fairly solid, but most players are better off waiting for a truly excellent adventure game like Zelda.