Published by Nintendo, Developed by Next Level

Does the underdog get his day?

Dark Moon once again pits Luigi against a horde of fiendish ghosts, armed with the new and improved Poltergust 5000. Luigi is called back into action by his old friend Professor E. Gadd, as normally peaceful ghosts turn malevolent due to the shattering of the Dark Moon. Luigi sets off to keep the ghosts contained and captured while searching for the pieces of the Dark Moon, each guarded by a possessor ghost and a returning villain. 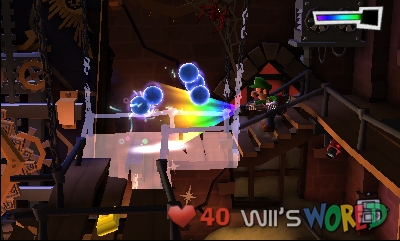 If players remember Luigi's initial adventure on Gamecube, Dark Moon will seem familiar. Ghost wrangling is largely the same and involves stunning ghosts with your flashlight and sucking them up into the vacuum. Both items though are slightly different, and largely the controls feel more polished than those in the Gamecube original. New to the series is a Dark Light attachment, which can expose invisible objects and items and is instrumental in solving puzzles.

Dark Moon features a much larger emphasis on puzzle solving than the original game. Though puzzles largely involve finding keys, object manipulation and usage of the Dark Light, it's rather surprising how developer Next Level Games does so much with so little. In a way, they're similar to those of point and click adventure games, but more logical.

While Dark Moon is larger than the original game with five mansions in total, one change to the formula might turn players off. The mansions are divided into 'missions', and divide the levels into sections on the way to each boss. Once a section is completed, players are automatically sent back to Gadd's lab to rest, save and prepare for the next area. While this might seem like a good idea due to Dark Moon being a portable game, there is no way to stop in the middle of a mission. This means that unless players are prepared to keep the 3DS suspended until they get to a power outlet, it isn't likely that they can take their time hunting for ghosts. Considering that the original Luigi's Mansion had save points, it seems odd that the sequel doesn't allow the same option. In addition, bonus levels which open up the mansions completely indicate that it wasn't a memory problem holding the developers back, so the lack of even a quicksave is a questionable design decision. This is especially evident in later stages as death means going all the way back to a mission's beginning, ghosts and everything. 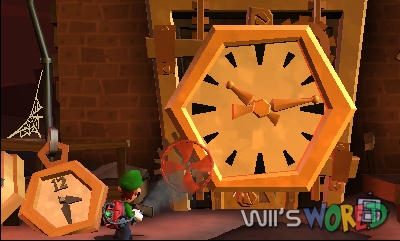 Dark Moon is another title that shows off the graphical prowess of the 3DS quite well. The art in particular is fantastic, with each mansion composed of an array of colors and a collection of stereotypical theme pieces that shouldn't fit together but do. Character animations are also exceptional, with Luigi being the standout; a variety of facial expressions, movements and voice makes Luigi a more genuinely fun character than his usually generic brother. Luigi's adventure emphasizes a more comedic tone than the gung-ho Mario titles, and there are more than a few slapstick moments. It's likely that the developers were inspired by classic screwball comedies like Ghostbuster inspiration Spook Busters or cartoons such as Disney's Lonesome Ghosts. These inspirations have done the developers well to give some personality to residents of the Mushroom Kingdom. The 3D does enhance the gameplay and even helps players at times, but the effect is somewhat understated compared to previous Nintendo titles.

The sound is good, just not up to Nintendo's usual standard. Most of the sound effects are taken directly from the first Luigi's Mansion, with a few spooky new ones added into the mix. The music likewise alternates between remixes of the original Luigi's Mansion theme and some great new themes. As for voice work, Luigi gets a few new lines courtesy of Charles Martinet.

Finishing Dark Moon will likely take players around ten hours, with perhaps an additional three for secrets. Unfortunately, finding the optional gems and Boos doesn't actually yield anything of value. The gems only offer a series of stylized Luigi statues, and Boo collecting gives Time Attack versions of already finished stages. Players can collect treasure like in the original Luigi's Mansion, for a series of minor upgrades. No, Luigi doesn't get another awesome mansion like in the first game. 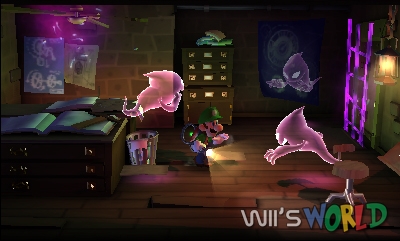 Thankfully, the game's multiplayer is a better endgame option for those who wish it, favoring ghost hunting over the puzzles found in the main quest. Four players work together in a Scarescraper, or a tower that needs to be cleared of ghosts. There are three modes, all of them cooperative. Hunt is simple finding and hunting ghosts together. Rush is a time trial in which players must balance ghost hunting with trying to reach an exit quickly. Polterpup involves a scavenger hunt of sorts, trying to track and find a ghostly dog that's made off with treasure. Each tower can have up to 25 floors and can go from manageable to nigh impossible depending on difficulty. Even across the globe there is little to no lag. It's a nice bonus, but still feels somewhat lacking.

Luigi's Mansion: Dark Moon is for the most part not the epic Luigi adventure many of us had hoped for. However, despite its relative lack of ambition and dubious lasting value, it is a good game. Fans of the original Luigi's Mansion will probably enjoy it, and 3DS owners would do well to at least rent the game. While Luigi still remains in Mario's shadow, he's slowly but surely catching up.

I hate the missions. They are so restrictive, especially with having to start over from the beginning (a personal pet peeve of mine). And I was disappointed with the unlockable ones being what they are. But other than that, the game is pretty great overall. I certainly don't think it's any worse than the first one, but I don't see that it improves on it much either with the completely different set up.